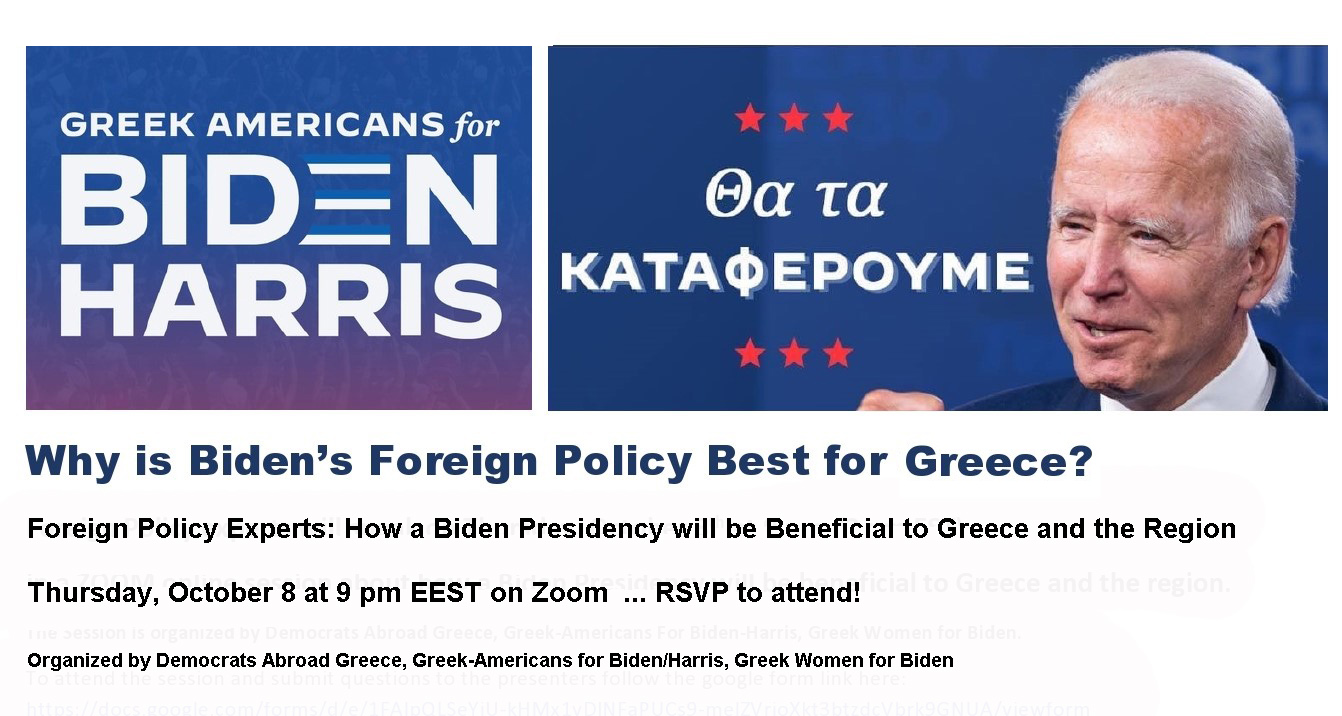 Prospects for sustainable peace in the region under a Biden presidency will be the focus when foreign policy veterans and experts from the Biden campaign meet in an online webinar.

The public is invited along with members and friends of Democrats Abroad Greece.

RSVP for “A Ballot for Biden is Best for Greece and Best for the US” to present your questions and receive a link to connect to the webinar. The Zoom link will be sent to attendees by email on Thursday, October 8th after 5 pm.

John McCarthy is the Deputy Political Director for the Joe Biden 2020 team. He previously was Chief of Staff for Rep. Brendan Boyle (D-PA), an active young congressman on Irish issues.  McCarthy also served as Chair of the Faith Council, responsible for outreach to faith groups.

McCarthy graduated with honors from the Catholic University of America where he studied politics and theology, before becoming an advocate for civic engagement and for youth involvement in the political process.

He was one of the founding members of the ACE Applied Research Network for the ACT Foundation, which aims to address the difficulties in accessing learning opportunities faced by young, low-income, working learners and he served as the first Director of Social Innovation Programming at Impact Hub DC, where his work focused on social entrepreneurship and encouraging civic entrepreneurs to expand. In addition to working on youth involvement and civic engagement, McCarthy is an active member of the Irish community in DC and served on a number of non-profit boards and advisory committees including the Irish Network of Washington, The Council for American Ireland Relations, and the American Ireland Fund’s DC Young Leaders.

Tom Miller is presently the Chair of the Board of the US subsidiary of Intralot, Inc., a Greek corporation that runs lotteries in 11 states and the District of Columbia. From 2010 through 2018, Miller served as President/CEO of International Executive Service Corps, a non-profit that provides expertise to developing countries to train in best business practices. Since 2011, Miller has served as Chair of the Board of the International Commission on Missing Persons, an internationally acclaimed organization that identifies missing persons by using DNA-matching techniques.

A 29-year career diplomat, Miller’s experience in the Foreign Service spanned many continents.  From 2001-04, he served as US Ambassador to Greece, where he focused on security concerns for the 2004 Olympic Games in Athens. From 1999-2001, as US Ambassador to Bosnia-Herzegovina, he worked on helping the country recover after a devastating war. From 1997-99, he was Special Coordinator for the Cyprus negotiations. He also served as Deputy Chief of Mission in Athens from 1994-97 and as Political Officer there from 1985-87.

Dimitrios Tsikouris is currently a foreign affairs advisor to the Roberts Law firm, a Washington DC group that specializes in international affairs. He has a rich combination of academic and international diplomacy experience. Fluent in five languages, he holds a summa cum laude JD from Athens University, a BA in Political Science from the same university, an MA in Political Science and an MA. in History, both from the University of New Orleans. He has served in Germany, at the United Nations in New York (32nd General Assembly) and in New Orleans, Louisiana as Consul for Greece with jurisdiction over eight states in the south of the United States. During his time in New Orleans, Ambassador Tsikouris was instrumental in establishing the Center for Greek Studies at the University of Florida, before moving to his next assignment as First Secretary of the Embassy of Greece in Washington, DC.

Ambassador Tsikouris also served as Faculty Advisor on the staff of the NATO Defense College in Rome (1990-1995), where he developed a new program on European Integration. He has extensive experience in the decision-making process of the European Union institutions, having headed both the Department of Internal Market and the European Constitution Department of the Greek MFA.  He has also served  as Minister Plenipotentiary at the Greek Embassy in Rome (1995-1996) and as Ambassador  of Greece to Iran (1996-2000), to Belgium (2005-2007) and to Indonesia, with parallel accreditation to Malaysia, Brunei Darussalam and Timor - Leste (2008-2010). Upon retirement in 2010, Ambassador Tsikouris became a US resident and subsequently joined Roberts Law Firm representing the firm in Washington, DC, New York and Europe.

Bonnie Miller, 50 years in service to others

Bonnie Miller's professional experience spans five decades as a social worker, psychotherapist, educator, consultant, social activist, and trainer. While living in Greece from 2001-04, Miller created parenting and educational manuals and videos (translated into Greek) and conducted training for educators. She also trained teachers from every school in Cyprus on learning and attention difficulties.

Miller’s fight against human trafficking in Greece included raising awareness of human trafficking among the public and government of Greece, helping to establish the first shelter for women victims of sex trafficking, and campaigning successfully for the passage of the first anti-trafficking law in Greece to provide for victims’ rights and psychological and medical services.

Miller has extensive background in countries experiencing war, genocide, and oppression of minorities. In her current role as Senior Education Advisor at Columbia University's Program on Peacebuilding and Rights, Miller has trained trainers and professors in Myanmar, Sri Lanka, Northern Macedonia, and Indonesia on conflict resolution and social harmony.

Prior to arriving in Luxembourg, Will lived in Dublin, Chicago, and Saint Louis (Missouri). He taught philosophy at the university level in the United States, while organizing and then serving as president of a trade union for adjunct professors. He helped found a Political Action Committee (PAC) associated with his federated labor union of more than 5000 members. He also ran for local political office in a suburb of Chicago (and lost).