Despite the shock and disappointment that overwhelmed us in the early morning hours of December 9, we would be remiss if we did not report on our lively election night party.  The German Social Democratic Party kindly invited us to join them for an open ended evening/morning held at their headquarters, in Kurt Schumacher House.  Over 150 people packed the large rooms which had been festively decorated with flags, banners and brightly colored campaign posters.  Our red, white and blue blended perfectly with their red, just as our members mingled easily with theirs.  By the time the panel discussion began it was standing room only.  Phillip Reviere of Democrats Abroad Hamburg joined three other experts and a moderator to discuss the inner workings of the US election system, their prognosis of who would win (unfortunately wrong), and comparisons with Germany.  Members of the audience eagerly asked questions, munched on donuts and later enjoyed music while waiting for the first results.

One American from the audience, MJ Ayer (actor, dancer and singer in Hamburg), expressed concern with how the Democratic Party had been treating the minorities in the campaign. Although his statement was listened to with respect, he wasn’t given much attention. Only days later would we realize that he was addressing one of the deficiencies of the campaign.

As the results came in, the excitement grew at first, the crowd cheering with each newly won blue state and district. In the beginning the few red states on the board didn’t offend. The atmosphere dampened quickly, however, when Florida refused to go blue. By 3 am it slowly dawned on everyone that the election might turn out differently than expected. In the early morning hours, only a handful Americans were left, trying not to give up all hope. They were reluctant to leave the supportive company of their fellow democrats. Eventually it became clear to all present that the challenges of 2017 had changed their shape completely. It is now more important than ever to be politically active and stand up for what we believe in.

Our sincere thanks goes out to the SPD Zentrale for their invitation, organization and their supportive members. 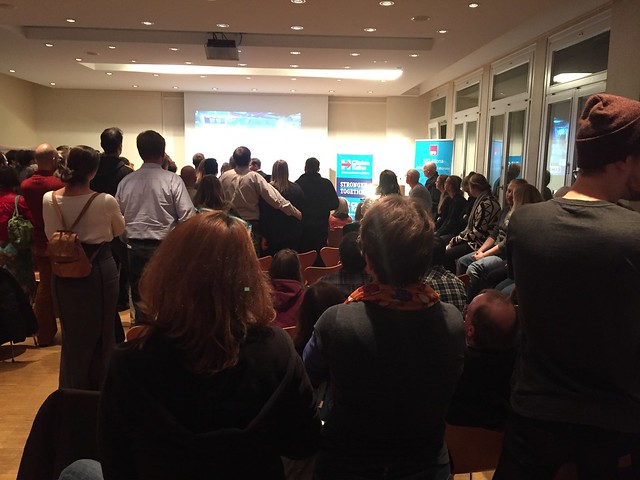