Only 7% of Americans Living in Italy Voted in 2016!
We need more Americans Abroad to Vote in November so we can elect leaders who will fight for Equality, Justice,
Gun Control, Climate Change, Health Care Access, Social Security and Fair Taxes for Citizens Abroad.

Democrats can win the White House and Senate if we all Vote!
Most elections are won by tiny margins (only 10,000 votes could have won Pennsylvania in 2016*).
There are millions of Americans Living Abroad so we can actually be the NEW MARGIN of VICTORY.

PLEASE Donate to DA Italy so we can get more Americans Living in Italy to VOTE! 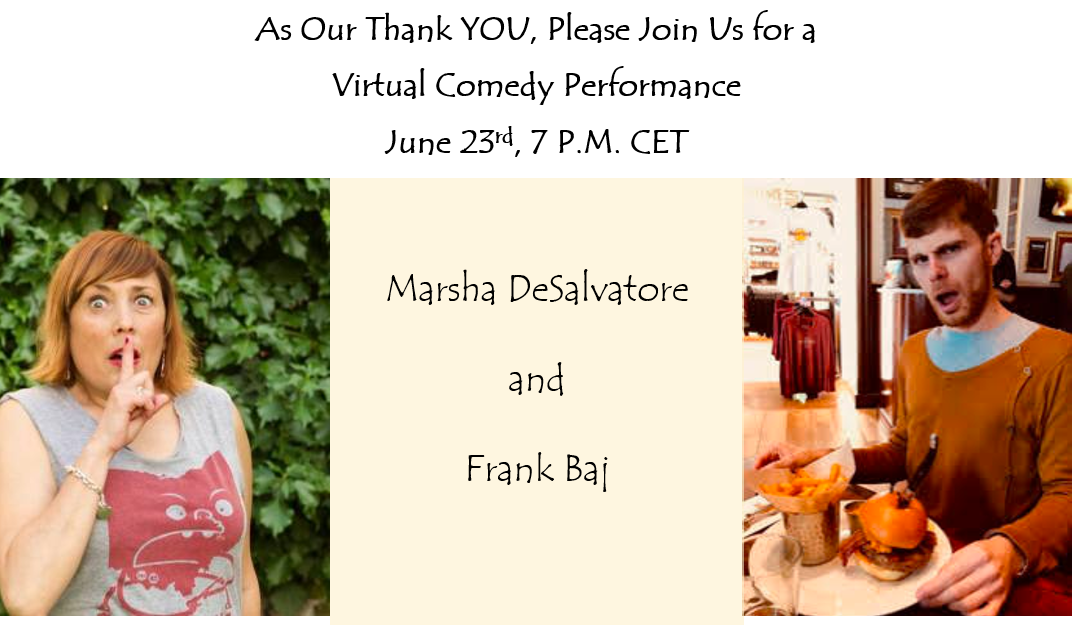 Marsha De Salvatore
One of the original founders/organizers of Rome’s Comedy Club, Marsha was born in Ohio and, to make things even more interesting, to parents from Calabria. This combination has led to her zaniness. She came to Italy in 2000 to find herself and is somehow still searching….
She found a job to pay her fashion debt as an English teacher and stumbled into acting through a student. She couldn’t portray a serious role in theater without coming across as being funny, so she took her funniness to the stage as a stand-up comedian. She is proud to say that she has trained at Second City of Chicago, has been on the Italian national morning show Uno Mattina, the radio station Radio DeeJay, and has been featured in countless magazines and newspapers about her shows, including "Marsha’s so-called life" (a one-woman show) and "DM55" (a comedy-drama about her blood illness).

Francisco Baj, aka Frank
A writer, actor and producer. He’s been working with Marsha for the past 3 years at Rome’s Comedy Club where he opens the show and performs at other comedy events. He played Hamlet and Desdemona in his own original production “Will You Shake your Speare?” and Tom in Tennessee Williams’ The Glass Menagerie and recently appeared at Teatro Eliseo with the multi-lingual comedy Tetas Y Recetas (Tits & Tips.)

Please RSVP and make your donation at least 48 hours prior to the event to allow time for processing.
Also include your email address so we can send you the event link.

You must install Zoom on your computer or smart phone.
Download Zoom Here

Help us create events that interest you by completing this 4 question survey:
Survey Monkey

* 46 Electoral Votes were determined by less than 1 percentage point which equates to 80,000 votes.
https://www.washingtonpost.com/news/the-fix/wp/2016/12/01/donald-trump-will-be-president-thanks-to-80000-people-in-three-states/