When Ann Hesse landed in Bielefeld, Germany in 1989, she was a wide-eyed opera singer looking for her next big break. Change was in the air. The collapse of the Berlin Wall was near. The fall of Communism in Eastern Europe was imminent. Looking back now, Hesse was also on the cusp of a monumental transformation.

In the decades since she arrived in Germany, she went from a conservative San Francisco Republican to a Democratic political activist. Today, she is the Global Women’s Caucus Chair and one of the most prolific volunteers in Democrats Abroad.

“We lived in the golden era of the 90s. We thought everything would be fine, and that things would only get better,” said Hesse during a recent conversation.

The decade brought many milestones in her life, personally and professionally. There were the performances with Placido Domingo and the marriage to her conductor husband that would forever help her set roots in Germany, while radically upending her ideology, as well.

“From the moment I got my first paycheck in Germany, things changed for me. You see what you get with the taxes you pay. Health care is paid for; the city streets are safe, you have high-speed trains, subsidized arts, and on and on,” she said. “I evolved from a conservative Republican by living it.”

While Hesse embraced her new political ideals, becoming a leader among fellow Democrats Abroad was a more gradual process, with starts and delays as she raised her two daughters, helping them through school, Friday-night drama classes and team sports.

Then, Donald Trump announced his candidacy in 2015. 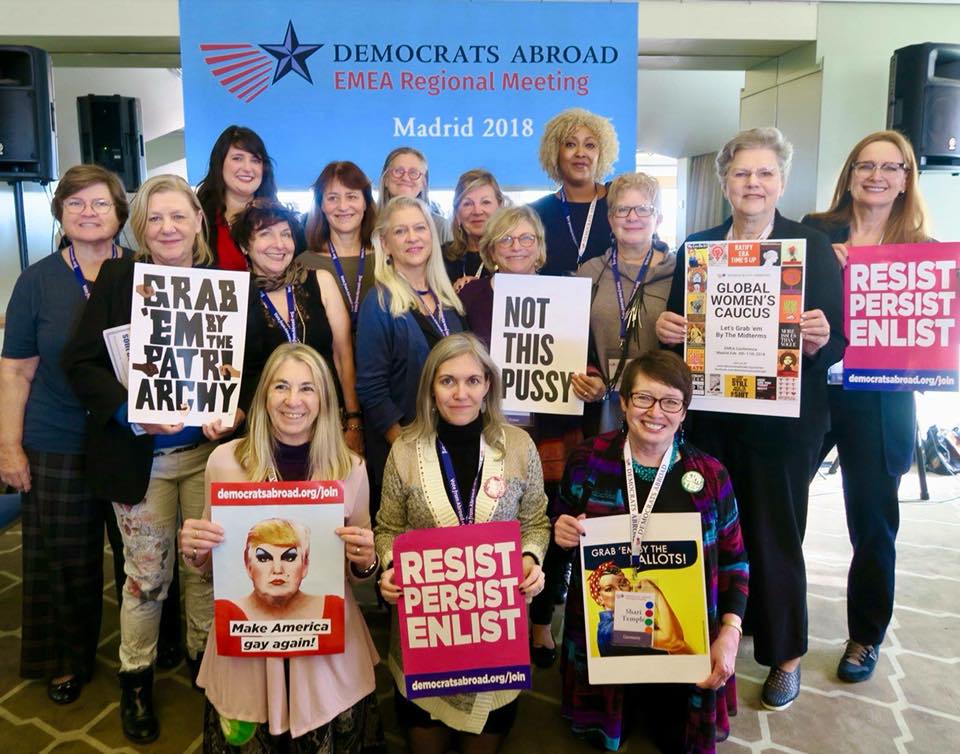 Hesse remembers one particular conversation with her daughters, when they told her that the future of their world seemed much bleaker than Hesse’s had been in the 80s and 90s.

“It was then that I decided I would use the rest of my energy to make that statement not true anymore. Their world,” she insisted, “would be getting better.”

In 2015, she showed up for her first Democrats Abroad chapter meeting in Stuttgart, and right away worked to establish the Stuttgart Women's Caucus. Two years later, she ran, and was elected, Stuttgart Chapter Chair of Democrats Abroad Germany.

For Hesse, successful leadership for Democrats Abroad has been a bit like playing matchmaker.

“There are these talented, brilliant experts in their fields, but they’re not connected. I work to build teams and give them structures and a job to do. I am most proud of being able to connect volunteers so they can do their own thing.”

Now, as Chair of the Global Women’s Caucus, Hesse presides over the largest of all Democrats Abroad caucuses, growing from around 1,500 members to 4,000 today.

“I am constantly inspired by team members and colleagues. It’s the people I work with; they are my heroes. We are all volunteers dedicating our time, and it can be exhausting. Each of us gives so much of our creativity, dedication, even spare cash donations, but it makes me feel good when I see other people working as I do, and we are making a difference.”

In today’s political climate, some days are still harder than others, but Hesse’s bonds with Democrats Abroad volunteers and her local community are deep and heartfelt.

“You become a de-facto ambassador for your county,” she said. “When Trump won, all my German neighbors, they all brought me a cake because they knew I would be devastated. All there was left to do was drown my sorrows in German cream cake, rest, and move forward.”

Today, as the Trump administration gives organizations like Democrats Abroad an ever-growing list of issues to fight, Hesse has found a balance. Baked goods have been replaced by classical music, which, after all, was the original catalyst for this remarkable adventure.

“I get up very early. I do morning yoga, and I play the piano to keep me sane and motivated – a beautiful day, a little bit of Chopin – that’s how I battle the stupid tweets.”

She then sets her sights on the work of making a better world.

Whether you have five minutes or five months, we have ways for you to volunteer! Check out all the ways you can get involved with us.