The military history of African Americans spans from the arrival of the first black slaves to the present day. Since the time of the American Revolution, African Americans have volunteered to serve their country in time of war.

The majority of colonist were neutral or Loyalist. For black people, what mattered most was freedom. As the Revolutionary War spread through every region, those in bondage sided with whichever army promised them liberty. The British actively recruited slaves belonging to Patriot masters and, consequently, more blacks fought for the Crown. An estimated 100,000 African Americans escaped, died or were killed during the American Revolution.

By 1783, thousands of black Americans had become involved in the war. Many were active participants, some won their freedom and others were victims, but throughout the struggle blacks were not mere bystanders.  They gave their loyalty to the side that seemed to offer the best prospect for freedom. However, of the many thousands of Africans that fought, not many of them got their freedom.1

Black people played a role on both sides during the War for Independence. Yet, at the Centennial Celebration of the Revolution in 1876 in Philadelphia, not a single speaker acknowledged the contributions of African Americans in establishing the nation.

During the Civil War, the issues of emancipation and military service were intertwined from the onset of the war. News from Fort Sumter set off a rush by free black men to enlist in U.S. military units. They were turned away because a Federal law dating from 1792 barred Negroes from bearing arms for the U.S. army (although they had served in the American Revolution and in the War of 1812). During the War of 1812, about one-quarter of the personnel in the American naval squadrons at the battle of Lake Erie were black.

Fredrik Douglas wrote; "Once let the black man get upon his person the brass letter, U.S., let him get an eagle on his button, and a musket on his shoulder and bullets in his pocket, there is no power on earth that can deny that he has earned the right to citizenship." 2

The first official authorization to employ African Americans in federal service was the Second Confiscation and Militia Act of July 17, 1862. This act allowed President Abraham Lincoln to accept persons of African descent in the military and gave permission to use them for any purpose he may judge best for the public welfare.

On July 17, 1862, Congress passed the Second Confiscation and Militia Act, freeing slaves who had masters in the Confederate Army. Two days later, slavery was abolished in the territories of the United States, and on July 22 Lincoln, presented the draft of the Emancipation Proclamation to his Cabinet.

Black units where not used as extensively in combat. “By the end of the Civil War, roughly 179,000 black men (10% of the Union Army) served as soldiers in the U.S. Army and another 19,000 served in the Navy. Nearly 40,000 black soldiers died over the course of the war—30,000 of infection or disease. Black soldiers served in artillery and infantry and performed all noncombat support functions that sustain an army, as well. Black carpenters, chaplains, cooks, guards, laborers, nurses, scouts, spies, steamboat pilots, surgeons, and teamsters also contributed to the war cause. There were nearly 80 black commissioned officers. Black women, who could not formally join the Army, nonetheless served as nurses, spies, and scouts, the most famous being Harriet Tubman” 2

“In addition to the perils of war faced by all Civil War soldiers, black soldiers faced additional problems stemming from racial prejudice. Racial discrimination was prevalent even in the North, and discriminatory practices permeated the U.S. military. Segregated units were formed with black enlisted men and typically commanded by white officers and black noncommissioned officers. The 54th Massachusetts was commanded by Robert Shaw and the 1st South Carolina by Thomas Wentworth Higginson—both white. Black soldiers were initially paid $10 per month from which $3 was automatically deducted for clothing, resulting in a net pay of $7. In contrast, white soldiers received$13 per month from which no clothing allowance was drawn. In June 1864 Congress granted equal pay.” 2

By war's end, 16 black soldiers had been awarded the Medal of Honor for their valor. 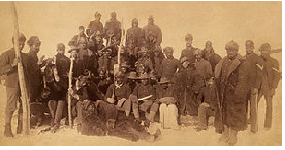 Following the U.S. Civil War, regiments of African-American men known as Buffalo Soldiers served on the western frontier, battling Indians and protecting settlers. This nickname was given to the "Negro Cavalry" by the Native American tribes. The Buffalo Soldiers included two regiments of all-black cavalry, the 9th and 10th cavalries, formed after Congress passed legislation in 1866 that allowed African Americans to enlist in the country’s regular peacetime military. There have been a few speculations as to how the Buffalo Soldiers got their name. First, Archivist Walter Hill of the National Archives reported that, in 1871 the Comanche bestowed the name of an animal they revered, the buffalo, on the men of the 10th Cavalry because they were impressed with their toughness in battle. Second, they were given the name because their fierce, brave nature reminded them of the way buffaloes fought. Third, it may have been because they wore thick coats made from buffalo hide during winter.  Lastly it is also reported that their soldiers’ dark, curly, black hair resembled Native Americans of a buffalo.

When the Indian wars ended in the 1890s, the buffalo soldiers went on to fight in Cuba in the 1898 Spanish-American War. And the 9th & 10th regiments fought bravely in Cuba at the side of Teddy Roosevelt's Rough Riders. They participate in General John J. Pershing’s 1916-1917 hunt for Mexican revolutionary Pancho Villa. And they even act as rangers in Yosemite and Sequoia national parks. 4

Although women weren’t allowed to serve as soldiers at the time, Cathay Williams posed as a man and joined the United States Army. On November 15, 1866, she became the first African-American female to enlist and serve in the 38th infantry, thus becoming the first female Buffalo Soldier.

USA entered WWl on April 6, 1917, joining Britain, France & Russia. African Americans were drafted on the same basis as whites and made up 13 percent of the draftees. By the end of the war, over 350,000 African-Americans had served in units on the Western Front. However, they were assigned to segregated units commanded by white officers. Many were used for unskilled and common labors. Many were poorly trained and equipped. It was written that, many senior white officers scorned the men under their command and repeatedly asked to be transferred. However, the 369th, 370th and 371st served with distinction under French command with French colonial units in front-line combat.5 The French did not harbor the same levels of disdain based on skin color and for many Americans of African-American descent it was a liberating and refreshing experience. The soldiers wore American uniform, some dating from the Union Army, French Helmets and were issued dated French weapons.  One of the most distinguished units was the 369th Infantry Regiment, known as the Harlem Hellfighters. The 369th was on the front lines for six months, longer than any other African-American regiment in the war. One hundred seventy-one members of the 369th were awarded the Legion of Merit. One member of the 369th, Sergeant Henry Johnson, was Medal of Honor. 6

In 1948, President Harry Truman issued an executive order eliminating racial segregation and discrimination in America’s armed forces; the last all-black units were disbanded during the first half of the 1950s.

Despite a high enlistment rate in the U.S. Army, African Americans were still not treated equally. Even the WAC nurse were segregated. Many African American nurses were highly qualified to serve within the military community at the beginning of World War II. Although, they were qualified they were constantly discriminated against. Mabel K. Staupers, the executive secretary of the National Association of Colored Graduate Nurses, lobbied for a change in the discriminatory policies of the Army Nurse Corps.

Many soldiers of color served their country with distinction during World War II. There were 125,000 African Americans who were overseas in World War II. Famous segregated units, such as the Tuskegee Airman and 761st Tank Battalion and the lesser-known but equally distinguished 452nd Anti-Aircraft Artillery Battalion. The Tuskegee Airmen were the first African-American pilots in United States military history; they flew with distinction during World War II.

Proving, once again, their value in combat, lead to desegregation all U.S. armed forces by executive order of President Harry Truman.  The last all-black units were disbanded during the first half of the 1950s. 8 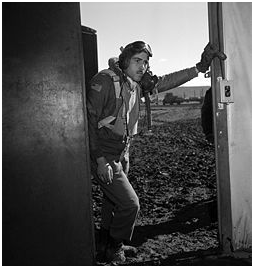 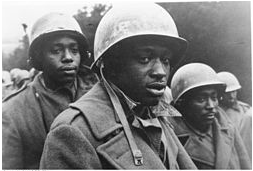 American soldiers captured  during the Battle of the Bulge December 1944.

Last of the Buffalo Soldiers that also severed in WWII:

On September 6, 2005, Mark Matthews, the last living Buffalo Soldier that severed in the 10th Cavalry and a World War ll vet, died at the age of 111. He was buried at Arlington. He fought in the Indian wars against the Cheyenne, Kiowa and Apache tribes on the Western frontier. Matthews joined the 10th Cavalry Regiment when he was only 15 years old with forged documents stating he was 17. He was on the expedition to hunt down Mexican General Pancho Villa.  After being transferred to Virginia he cared for President Roosevelt & Eleanor Roosevelt horses. He was a member of the Buffalo Soldiers' drum and bugle corps. In his late 40s, he served in combat operations in the Pacific during World War II and achieved the rank of First Sergeant. 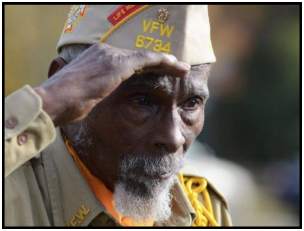 Tomie Louis Gaines, reported also to be the last Buffalo Soldier passed away at 93 on February 25, 2016.  He was born on in Hartwell, Georgia. Gaines served in the early twentieth century with the last of the Buffalo Soldiers, the nineteenth century regiments commissioned immediately after the Civil War. Gaines served in World War II from March 1943 to December 1945 with the 27th Cavalry Regiment (Horse) (Colored), 5th Cavalry Brigade, and the 2nd Cavalry Division of the U.S. Army.

“There was a buffalo soldier in the heart of America,
Stolen from Africa, brought to America,
Fighting on arrival, fighting for survival.”

https://americacomesalive.com/2015/01/05/harlem-hellfighter-hero-henry-lincoln-johnson/posthumously the Medal of Honor. 6