A LOOK BACK : The DA Global Convention in Berlin

The Democrats Abroad Global Convention in Berlin came to a successful close on Sunday after a long and action-packed weekend. 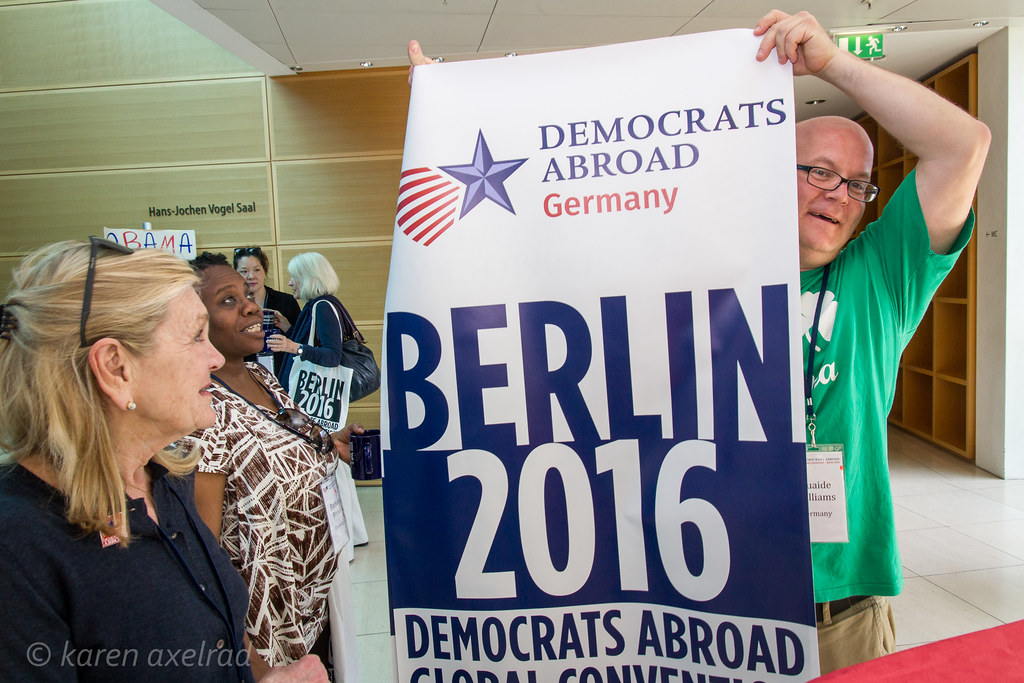 On Thursday night, after the DPCA meeting was concluded, the Sanders campaign organized a dinner in honor of Senator Sanders.   Speakers included Eric Lee, the official Sanders campaign liaison based in the UK, Michael Steltzer of Berlin4Bernie, and Larry Sanders.  If Larry's name sounds familiar, it’s because his brother Bernie has been in the news a lot lately! He regaled the crowd with stories of Bernie as an adolescent and was met with great enthusiasm and interest.

Friday was particularly busy, as all three regions met in caucus to elect their regional delegates. The EMEA caucus began the day as a group, voting for a DNC member to represent the region (Connie Borde from France). The caucus then adjourned into two presidential preference groups.  In the Hillary group, Salli Swartz of France and Reno Domenico of Ukraine were elected to represent the region and the Clinton campaign. In the Bernie room, electors voted in Bernie's brother Larry Sanders, from the UK. Also elected were Penny Schantz from France, and Ryan Turner from Spain. 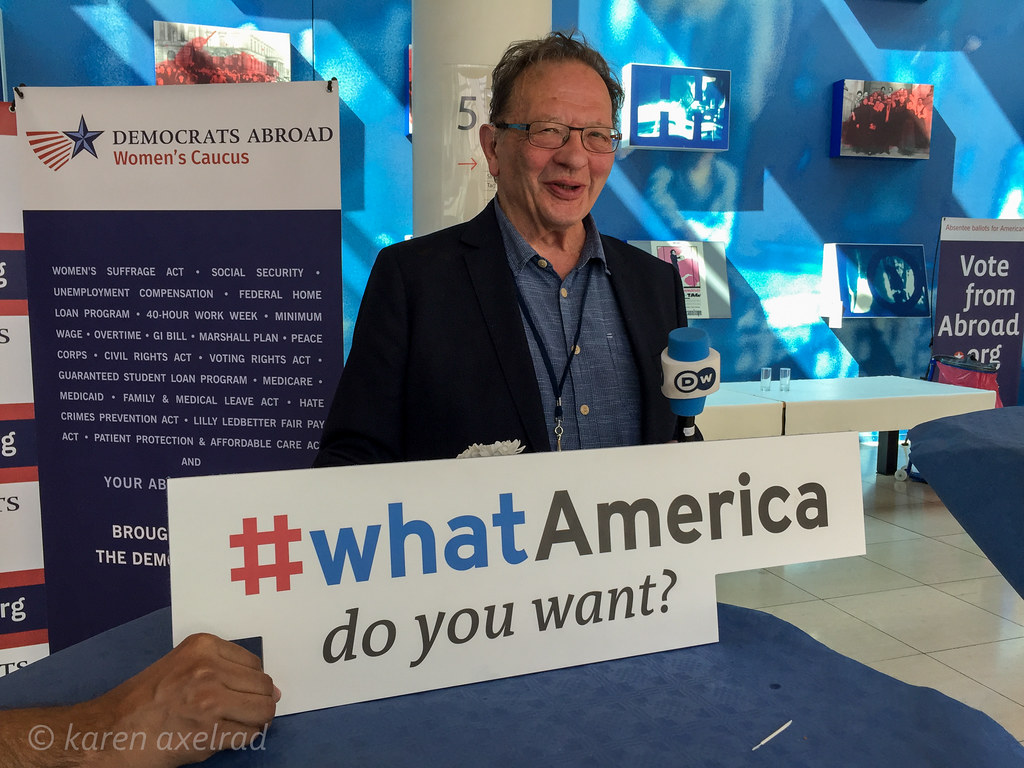 Halfway through the day, the Americas’ caucus began with the election of their regional DNC member, Ken Sherman from Canada. The caucus then divided and elected Giles Hogya of Canada as a delegate for Hillary, and Ed Ungar, also of Canada, as a delegate for Bernie.  At the very end of the day (in the French Polynesian islands) and at 5am in the morning Berlin time, the Asia Pacific caucus met, electing John Eastwood from Taiwan as DNC member, Carmelan Polce of Singapore as a Hillary delegate, and Alexander Gonzalez of Japan to represent Bernie.

Friday evening was capped off with a much needed Happy Hour hosted by the Youth, Women’s, and LGBT Caucuses, and it was followed immediately by a dinner in honor of Secretary Clinton. The speakers included the official campaign liaison, former-Ambassador Amy Bondurant, and Giulia Ceresi Marchiori, director of the American overseas effort for the Hillary campaign. Both were roundly applauded for their efforts in getting out the vote overseas and attendees were also enthusiastic when they were able to receive their very own overseas woman's card.

On Saturday, the Global Convention got underway with an update on the delegate selection process, and a very important announcement from the Rules and Credentials committees who announced that they found the challenge made by Hillary about delegate allocation to have no merit, and it was rejected, meaning there would be no change in the allocation. 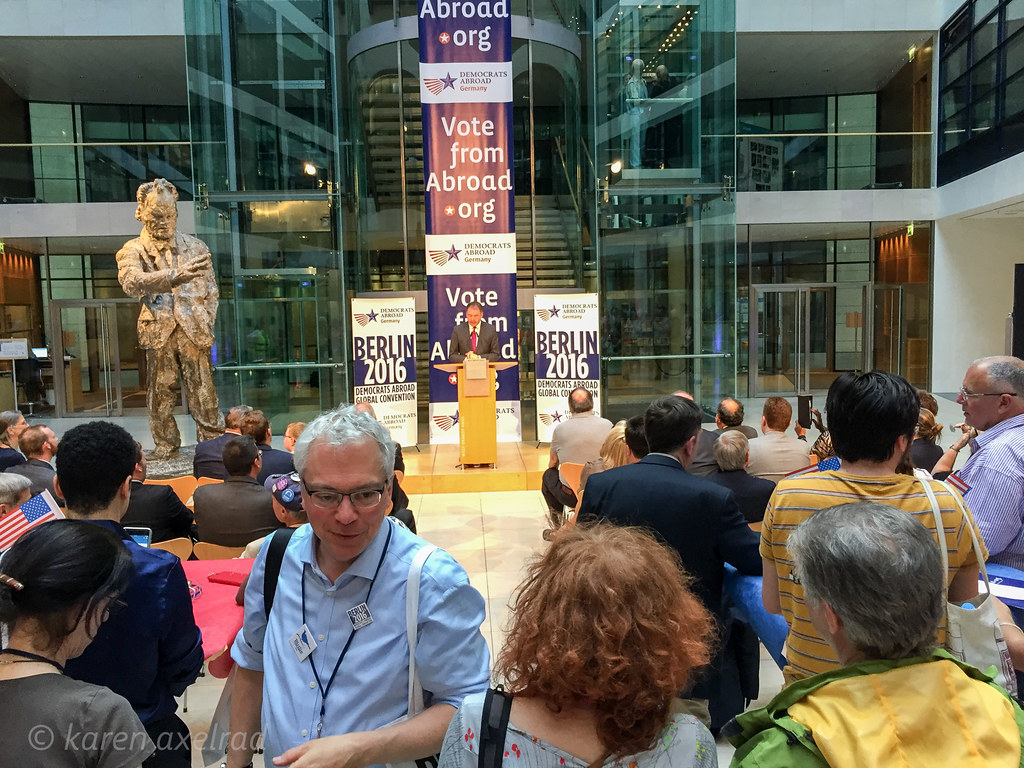 The requirement of gender balance made it clear that of the four global delegates to be elected, only one could be a male and the remaining three had to be female.  And as all the global delegates were pledged to Bernie as a result of the allocation, most of the action of the day took place in the Bernie room. The day began with the PLEO delegate vote, with Julia Bryan of the Czech Republic elected to represent the Sanders group. The remaining elections of at-large delegates included Kari Mosleh of the UK, Sarah Tseng of Canada, and Bob Vallier of France, before proceeding on to the selection of the alternate. That race went to a second round and was resolved on Sunday morning, with Solomon Steen of China eventually emerging as the winner.  Meanwhile, over in the Hillary room, six rounds of voting resulted in a victory for Shari Temple of Germany, who was elected alternate.

On Saturday night, DA celebrated with a Davidson Hyde Gala Dinner. Named after two of our founders, the dinner was held in a lovely restaurant on a river wharf.  The keynote speaker was Congresswoman Dina Titus of Nevada, who has long been a big supporter of Democrats Abroad. 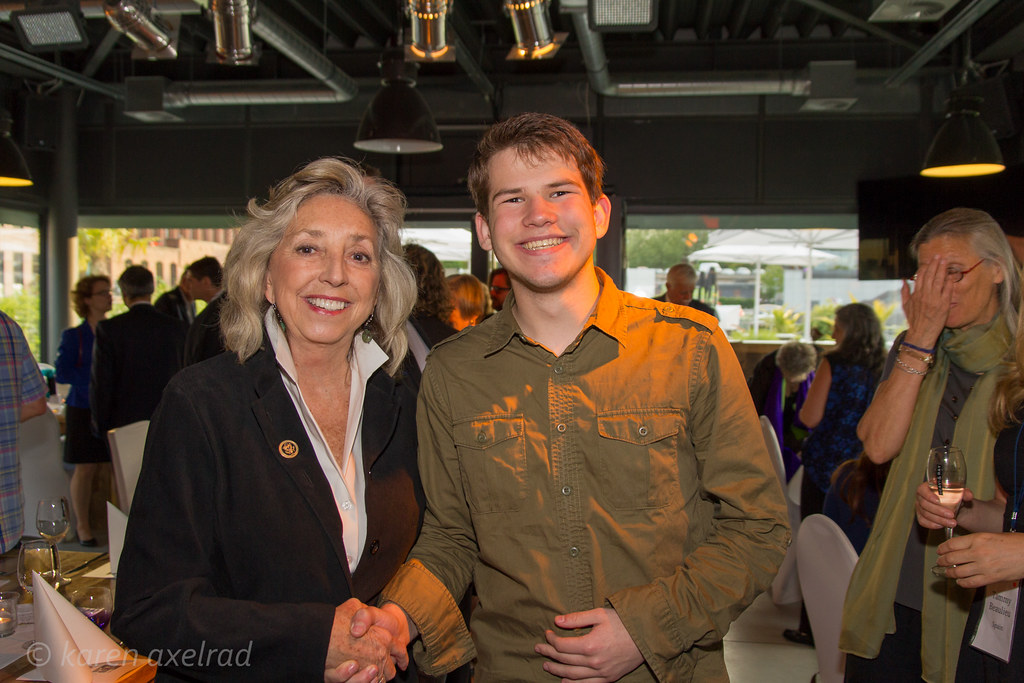 In addition to selecting delegates and doing the business of Democrats Abroad, the group also elected its new representatives to the Democratic National Committee. As mentioned above, during the regional caucuses on Friday, EMEA elected Constance Borde of France, the Americas selected Ken Sherman of Canada, and in Asia Pacific, the nod went to John Eastwood.  On Saturday at the Global Convention, the entire body elected Martha McDevitt-Pugh of the Netherlands, Adrianne George of Sweden, and Orlando Vidal of the UAE.

But the weekend wasn’t over yet :  Sunday afternoon was devoted to a detailed examination of the Platform. Remarkably, we made it most of the way through our packed agenda, leaving only a few planks of the Platform still to be addressed at a later date. 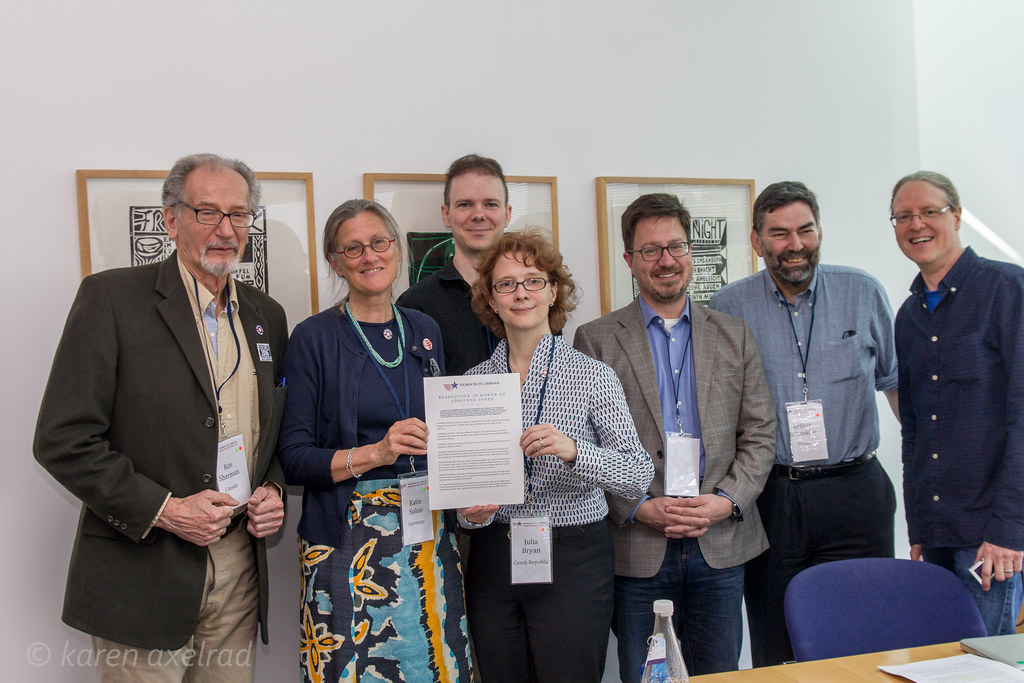 Our successful Convention could not have been possible without the incredible work of the volunteers from DA Germany and DA Berlin.  They organized an incredible crew of volunteers who were on top of every detail, and who kept the coffee flowing.  Equally incredible was the work done by the tech crew, as the entire proceedings were broadcast over Webex and people logged in from all over the world, at all hours, to participate.   The entire affair was a herculean undertaking, it was pulled off without a hitch, and the volunteers and International ExCom who helped organize it deserve our thanks and admiration.

We’ll be profiling all the delegates and DNC members-elect in the coming weeks as we get ready  to go to Philadelphia, so stay tuned for more!

And now it’s on to the National Convention and victory in November !

P.S.  Do you like these pictures?  They're all by DA member Karen Axelrad, and you can see 250 more of them by clicking HERE.