Call for Chapter Board of Director Nominations

Volunteer for a role that could help shape America. Deadline for nominations: February 11, 2021 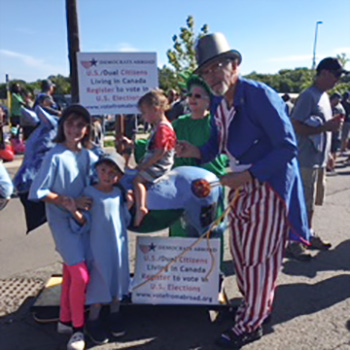 DA Hamilton-Burlington is a chapter of DA Canada, the official country committee for US Democrats living in Canada. Watch this space for upcoming announcements of meetings and events - we have events planned throughout the year, and encourage anyone interested in participating to get in touch.

Hundreds of American citizen volunteers across Canada are working to educate all eligible U.S. voters on their right to vote and how to get their ballots to vote in every election. That includes Canadians who were born in the U.S. and those born in Canada to an American parent(s), who therefore have the right to vote. Americans living in Canada CAN deliver the difference in close elections.

Go to VoteFromAbroad.org today to register for your ballot.

Join our chapter Facebook group here to share info and opinion and keep up with our activities. If you have any questions or suggestions or would like to help Democrats Abroad reach U.S. citizens in our area, please contact us.

We'll gather at the George Hamilton restaurant at 152 King Street West at Bay Street in downtown Hamilton.   Doors open at 8:30 pm; the debates are scheduled to begin at 9 pm.  American citizens will be able to register to vote at the event both nights -- and to join Democrats Abroad if they wish.  Drinks and pub food will be available at cost.  The event itself is open to the public at no charge.

Today (June 12) is the final deadline for nationally recognized polls which are needed by the Dem hopefuls to qualify for inclusion in the debates.  The final information on who will be included in the debates will be available tomorrow.  To learn more, see https://fivethirtyeight.com/features/the-first-democratic-debate-deadline-is-almost-here-whos-in-and-whos-out/

For more about the venue, see www.thegeorgehamilton.com/

There is new leadership in place for the Hamilton-Burlington-Niagara Chapter, elected at the Annual General Meeting on March 23d.

This Board includes four new members and four returning members:

The entire board expresses great thanks to Ken Sherman who will stay involved as Past Chair.  Ken founded our chapter some fifteen years ago and has served as chair until now in addition to his Canada-wide and global roles.  Ken has been instrumental to the growth of the chapter over the years.

Thank you to these volunteers who have stepped up to help lead our Chapter!

All positions are uncontested, so we are not sending digital ballots. All voting will be in-person.

Candidates for election are listed below with their candidate statements.

For reference, the nomination call was emailed to all eligible Chapter members and posted here.  The Chapter Nominations and Elections Committee is comprised of: Susan Alksnis (Chair) and Tim Flannery (Teller). Questions can be directed to Susan by email.

I am active in Democrats Abroad to bring positive change to U.S. politics.  I have been active in Vancouver and now Hamilton. I was on the Vancouver exec committee and now with Hamilton’s exec. I was in Japan for the 1980 election and was an alternate to the Dem National Convention. In Vancouver in 2008, I registered over 300 U.S. citizens to vote.

I know non-profits. For four years, I was the exec director of a political change organization in Washington, DC.  For 25 years, I was a rabbi in several synagogues. Now retired, I have time and energy for Dems Abroad.

I am focused on electoral success in 2020.  I want to reach out to the thousands of U.S. citizens in our area to register and vote.  I have organized successful voter registration at a speech by Hillary Clinton as well as the Women's March, Folk Festival, Pride Parade and more. During the mid-term, I organized nearly 40 Dems Abroad Canada to volunteer in swing districts in the U.S.  As the Communications Officer for Dems Abroad Canada, I helped raise our profile with stories in nearly all the mainstream media in Canada. I will continue to reach out to hundreds of thousands of U.S. citizens in Canada.  I can also support our chapter as Chair along with the other members of the board to help the chapter grow.

It is important to listen to any concerns that members bring forward.  I welcome members and interested not-yet-members to contact me at any time.

I have been involved with the Hamilton DA chapter for several years, most recently as Vice Chair. I have attended, supported and helped organize the Chapter's varied activities including the annual tax seminar, the summer picnic, and local Get Out the Vote efforts. I look forward to continuing to work with our Hamilton group as we move toward the 2020 election. I vote in Minnesota.

Please accept this self-nomination for the role of Secretary.  As a dual American/Canadian citizen residing in Canada for the past 23 years and in the USA for the preceding 18 years, I want to support the Democratic party during this chaotic US political climate.   I originally became involved to exercise my right to vote in the US elections and attended a DA sponsored tax seminar to better understand my challenging tax compliance requirements as a dual US/Canadian citizen. As I participated in the Labour Day parade, Locke Street festival and SuperCrawl to raise awareness, I also came to understand how the DA organization is structured internationally.  Last year I worked on the Toronto based GOTV campaign so learned more about the internal operations of the organization, its goals and special projects to make a difference in advancing the Democratic party’s objectives during the mid-term elections. The people I have met are wonderful and the information disseminated is greatly appreciated.  I feel that my skills as a certified project manager and management consultant can continue to be leveraged to support the chapter.

Instead of throwing marshmallows at the TV I decided to contact other Democrats and do as much as I could to support the Democratic party.  In my role as Treasurer of Democrats Abroad Hamilton-Burlington I feel I am doing my part to encourage US citizens to vote and hopefully, elect more Democrats to serve in public office. It is my desire to continue in this office.

Open – nominations can be made from the floor during the Chapter Annual General Meeting on Saturday, March 23rd.

I am 69 Years old, from Chicago and immigrated to Canada with my wife as NAFTA investors in 2010 when we bought a transportation company in Milton, ON. I have a BS in Industrial Technology from Southern Illinois University. Most of my career has been as a senior manager, operation and sales, in technology related industries. I have been involved throughout much of my life in a variety of community and civic activities such as; City Council in Harvard, Illinois, officer positions in the Jaycees, Rotary, Wicker Park-Bucktown Chamber of Commerce, and Wicker Park Committee (a neighborhood association), active in several Chicago city council campaigns as well as two congressional campaigns and upon moving to Canada we were active in supporting our local councillor, now mayor of Burlington. I view Trump as a threat to the United States and the world. I’m concerned about income inequality, climate change, and ignorance over critical thought. I value history, civics, the arts, community and civility over what's the shortest path to making a buck or “screw you I've got mine”. I am disturbed by most of the current political class who mostly appear to put self above society.

I was born and raised in the Detroit area and attended Eastern Michigan University where I earned both BBA and MBA degrees.  In 1987, I moved to Chicago where I lived until we moved to Canada in June 2010 when my husband and I acquired a courier business in Milton through the NAFTA investor program.  I am a dual citizen and vote in US elections from Illinois.  I live in Hamilton with my husband, dog and three cats.  My corporate business career spanned over 25 years in the telecommunications industry where I held executive management positions leading large sales organizations across the US and Canada.  Since the acquisition of our business here in Canada, I am responsible for managing all financial activity as well as website development, marketing, and IT.  On a community level, I served on the board of the Wicker Park Committee (neighbourhood organization), was a founding member of the Wicker Park Garden Club, and served as a Trustee and member of the Stewardship Committee at Fourth Presbyterian Church of Chicago.  Here in Canada, I participate on the stewardship committee and the planning committee for the annual fund raising events for Port Nelson United Church in Burlington.

I have always followed politics and have voted in every election since I became eligible to vote.  I believe under the current administration, our voting rights are at risk.  Voter suppression is one key issue that I believe needs significant attention from lawmakers.  My other key issues are universal healthcare, climate change, gun control, corporate "ownership" of our elected members of congress, and the threat to women's reproductive freedom.  I am encouraged by the recent mid-term elections and hopeful the pendulum will swing back toward sanity and bi-partisanship.  I long for politicians who can develop and enact legislation that serves the people, not the corporations and top one percent.

I have been volunteering for Democrats Abroad for eight years, helping Democrats Abroad Canada coordinate its social media. I served on the Hamilton/Burlington/Niagara chapter last term as IT Manager. I’m looking forward to helping the chapter with its communications.

This is a great time to join our energetic and committed Chapter leadership. All Chapter members are invited to make a nomination for election to the chapter board. You can nominate yourself or someone else.

Running for multiple positions is permitted.

The Nomination and Election Committee (NEC) for this election is comprised of Susan Alksnis (Chair), Tim Flannery (Vice Chair) and (Teller of Elections - TBD).

The Treasurer shall manage the finances of the chapter and its financial records. They report to the Chapter Board. All such records shall be open for inspection by members. The Treasurer shall prepare and present to the annual meeting (AGM) of the Chapter a Statement of Income and Expenses based on a fiscal year ending December 31. (4-5 hours a month)

The Membership Secretary maintains the chapter database by responding in a timely manner to member requests for changes, welcoming new members, and by using best practices to ensure data integrity, confidentiality, and accuracy. The Membership Secretary participates in the annual Democrats Abroad Canada membership verification process, which includes organizing phoning to members whose memberships are expiring. Training will be provided on DA's NationBuilder database, which is a required competency for this position.  (4-5 hours a month)

The Members-at-Large (at least 3) represent the broader membership of the chapter and bring special gifts and talents, which complement those of the other elected officials on the Board, such as IT, Communications, Events, and general support. Areas of involvement may include engaging members by organizing events, such as Tax Seminars, Debate Watches, DA’s Global Primary Voting Centers, phone banking events, pub nights, movie nights, voter registration tables or speaker nights. There are also opportunities to help with communications, social media, media relations, and our member database. Other responsibilities may include: posting events on the chapter website, writing articles for the website, writing and/or sending emails. Nominees are requested to indicate their expected areas or projects of focus. (4-5 hours a month)