Defending Democracy One Postcard at a Time 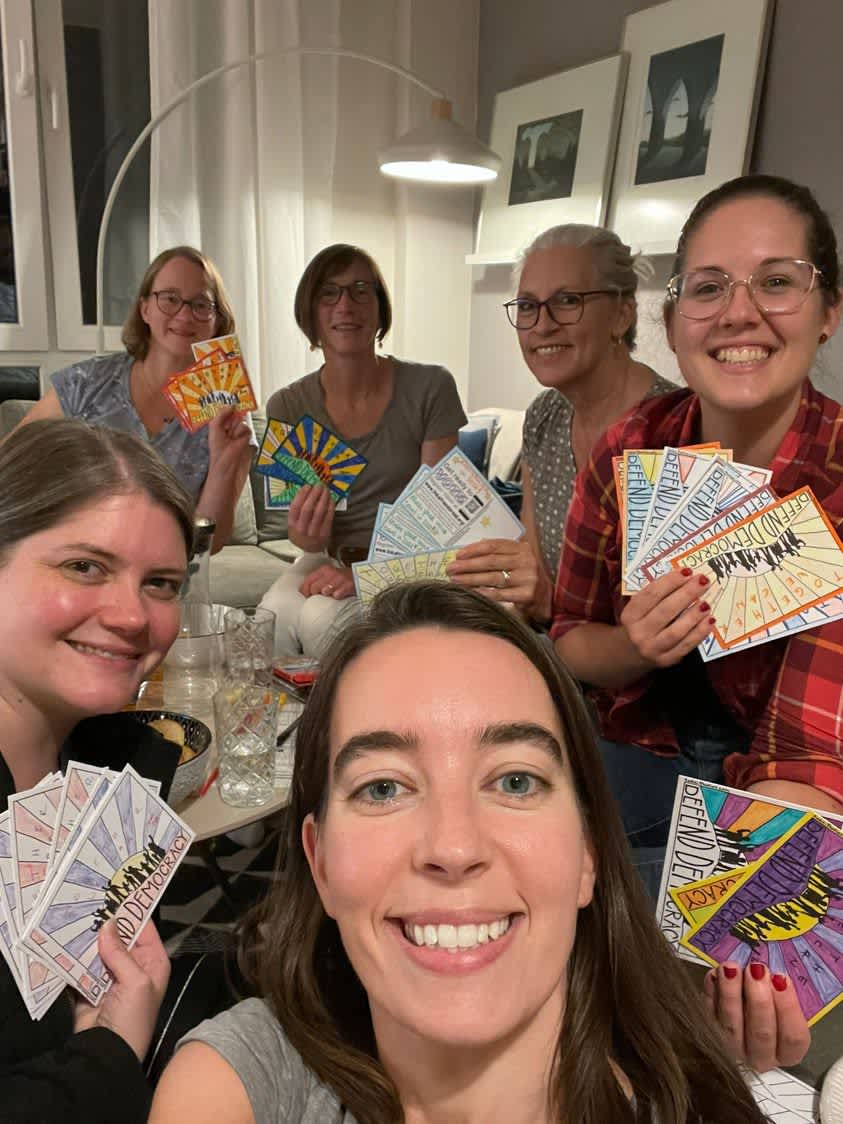 Last week, the DA Ladies got together to kick off our latest campaign in preparation for the 2022 Midterm Elections- postcards! We're certainly off to a good start! 💪

Come join us on Friday, October 1st at the Happy Monkey if you want to color postcards too (and enjoy some delicious bagels). Check out the event page for more details! 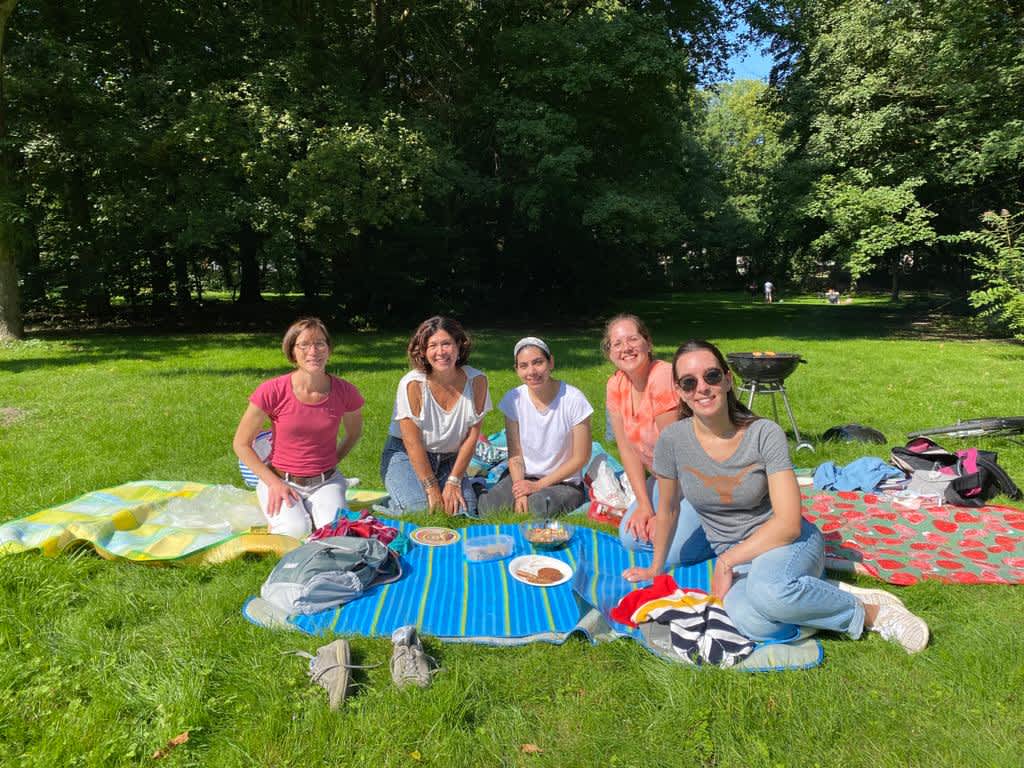 Yesterday we had a nice little picnic for Labor Day! While we definitely spent a decent amount of time socializing, we also made some plans for the next few weeks and months. Stay tuned for more events and updates over the next few weeks!

After a much deserved summer vacation, our chapter is getting back into the swing of things! This month is full of events, including our in-person monthly meeting THIS SATURDAY! We hope to see you there!

Summer is finally here, and that means it's vacation time! Democrats Abroad Muenster will be taking a break this August, but we will return in full force in September! We have quite a few events planned, which will hopefully be able to take place in person. We are planning for that at the moment, but as we approach the events, we will evaluate the current situation and decide whether it’s possible to meet in person or not. Read the rest of our newsletter to see what events we have in store and ways you can get involved this summer!

The Muenster-Osnabrueck 2021 chapter elections will be held on March 6.   Click here for details. 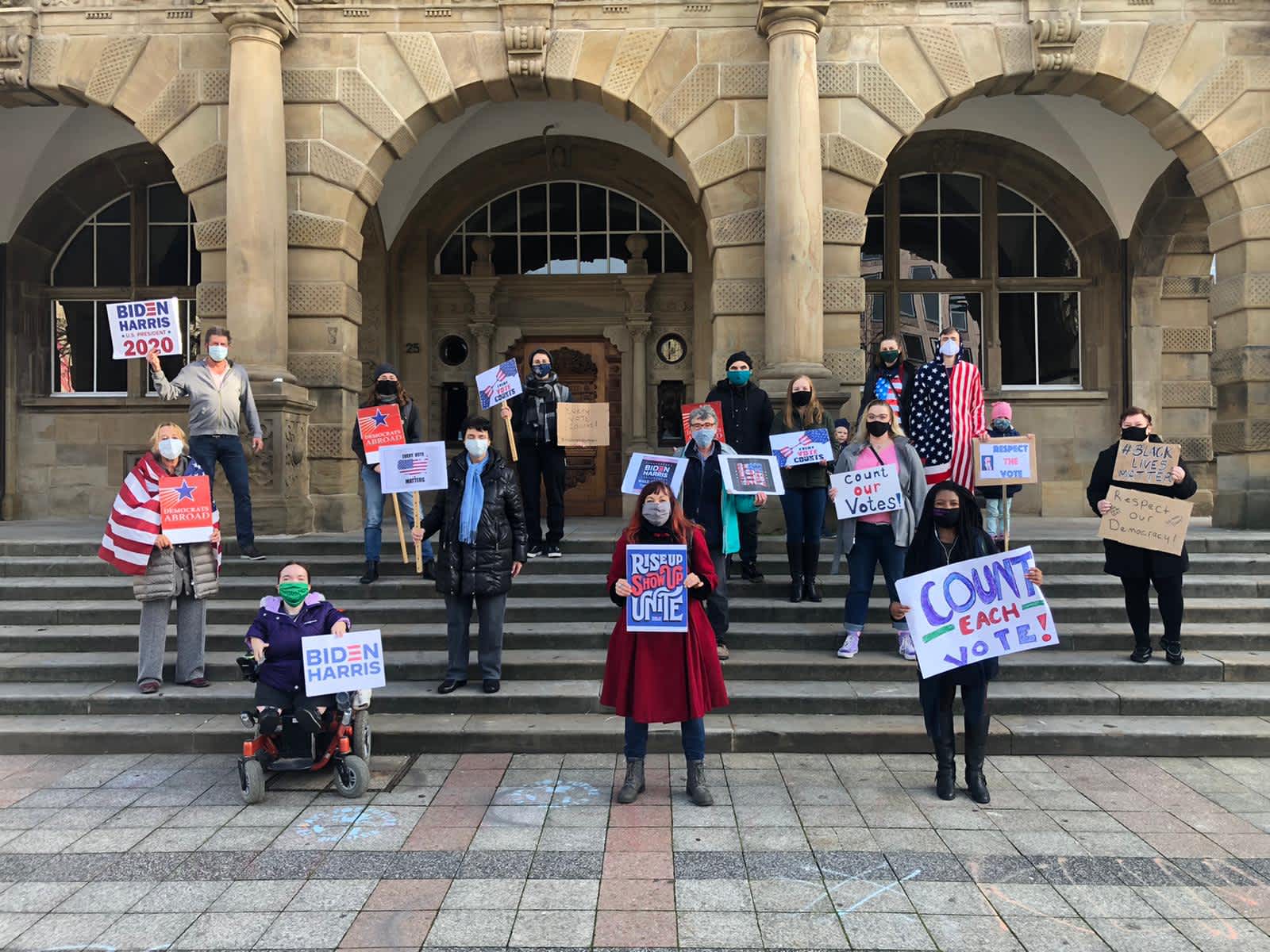 The past few months have seen a revival of a group that is far older then our relatively recently sanctioned Münster/Osnabrück chapter. The Bielefeld Precinct of the Münster/Osnabrück Chapter has a rich and deep history but had fallen a bit dormant over the past few years. No more.
Shorty before the election, the group had tables set up in the pedestrian area of Bielefeld in search of Americans who had not yet requested their election ballot. And in the days after the election, with the President claiming a phantom victory, the group "took to the streets" again, this time to express their, shall we say, displeasure over the President's undemocratic actions.
People interested in becoming more active in the precinct should contact us at [email protected] The group has a very active political chat group and meets regularly online.

Since June of 2018 we have been meeting every first Saturday of the month in Münster at 10AM. Our current regular meeting spot is the Alexianer Waschküche across the street from the Münster Hbf. All DA members are welcome. (Corona Note - as long as we are unable to meet in person, our First Saturday in Münster meetings will take place online. See events for more details)

When do children need to start filing? And do they have to file the FBAR? Do I have to file taxes if I have no income? What if I’m self-employed? These questions and many more were part of a spirited and wide-ranging discussion at our inaugural tax talk on June 13th. Daniela Räkers, a Rheine based German accountant and licensed American CPA, sought to calm nerves about this very complicated and confusing topic. The discussion was both enlightening and at times baffling as we waded through abbreviations and terminology such as FBAR and Foreign Earned Income Exclusion, but in the end participants agreed that it was an evening well spent. Be on the lookout for another tax talk next year!

Q: Which American state capital is named after a German chancellor?

This was just one of the questions posed at last night’s American Pub Quiz in Osnabrück, Germany. In cooperation with the University of Osnabrück’s Institute for English and American Studies, Democrats Abroad Münster-Osnabrück hosted its inaugural trivia night on May 23, 2019 at local student bar Unikeller. Eleven teams competed to answer questions about American geography, history, sports, politics, and music, as well as identify photographs of famous Germans in America. In the breaks between categories, the crowd enjoyed classic American tunes and complimentary Schnaps. The race for the main prize of Democrats Abroad merchandise and a free round of drinks remained exciting to the end, with only a half-point difference between the first and second-place teams.

Hosting our first-ever pub quiz was an ambitious undertaking, but one we felt would advance our organization’s goals. As one of the younger Democrats Abroad Germany chapters, we cover the region surrounding Münster, Osnabrück, and Bielefeld. Most previous activities have centered on Münster, as the majority of our members are based there. Our aim in staging an event of this scale in Osnabrück was to expand our presence in the other areas under our jurisdiction. A second goal was to generate interest among younger residents for our mission and activities in the region.

Participation in the event was open to all. Our crowd consisted of Americans, Germans, and persons of other nationalities. By inviting anyone to attend, we hoped to attract a larger number of participants, who would, in turn, spread the word about Democrats Abroad to Americans they know or meet in the city. With a turnout of 55 contestants, we consider the evening a great success and look forward to organizing similar events in the future!