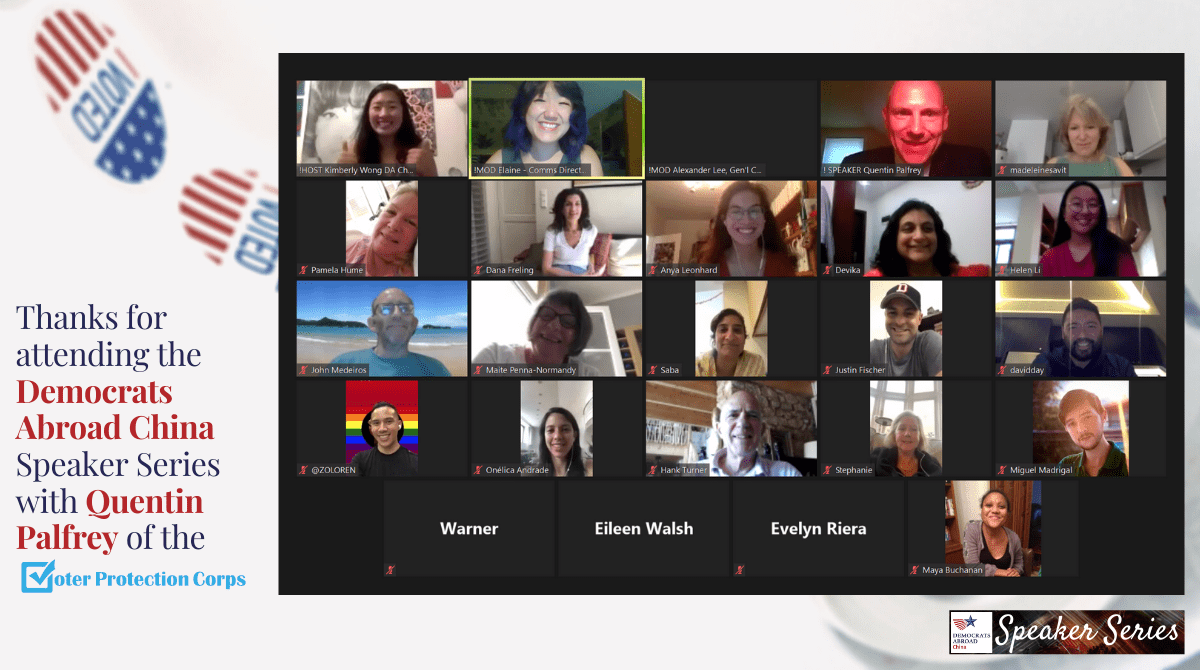 Over the weekend, Democrats Abroad members from all over the world talked to Quentin Palfrey, co-director of the Voter Protection Corps, an experts-led initiative to protect voting rights from all angles.

In 2004, he became the Voting director for the Kerry/Edwards campaign in New Hampshire. The state that had just been involved in a Senate election phone jamming scandal in which the Republican-hired telemarketing firm was found to have jammed the phone lines of Democratic-leaning call centers. By spending time communicating rights to university students in the area, his team was able to successfully move New Hampshire from Red to Blue.

But as the team celebrated their win in New Hampshire, soon “our hearts sank while watching CNN. We were tuned into what was happening in Ohio, and we saw four to five-hour lines for the Black communities there. Whether or not it did cause the difference in the final election numbers, this was a big problem. There are obstacles to registering if you’re not privileged.”

During the Obama campaign, his voter protection efforts were focused directly on solving the problems of those lines. The campaign sent 4000 lawyers into the field in Ohio alone to ensure that Republican-backed voting restrictions would be overturned in time.

“We were proud of the opportunity to work for them there and also the 2012 elections. We were able to move forward on a lot of issues,” Quentin said, but “I have to admit I’ve been devastated by what’s come since. There is a cruelty to this current administration that puts walls between families, that attacks our American values… Now we sit on the cusp, just months away, of the most important election of our time.”

“We’ve seen a series of primaries over the last couple months where problems are worse than they’ve ever been – last week in Georgia, but also Nevada, Washington D.C., Pennsylvania and Wisconsin…”

But he wasn’t giving up the fight yet, and he encouraged Democrats Abroad members to also continue fighting on. He urged everyone concerned about voting rights to:

Democrats Abroad discussed with him actions we could all take at this very moment, and after sorting through the wealth of information and advice, we settled on three:

Suppressed: The Fight to Vote – a quick 35-minute documentary on what went down in Georgia in 2018. Educating everyone on how a vote is suppressed helps set the foundations for changing the system. You can watch it free on YouTube.

Gubernatorial candidate Stacey Abrams has continued her fight with a national platform called Fair Fight 2020, which is helping to build voter protection teams with Democratic state parties and local allies. Sign up! And encourage friends back in the States to sign up for Fair Fight. There may be locally based actions they could take very soon in the future.

REACH OUT TO EXPERTS:

The Voter Protection Corps is specifically made up of legal professionals that can help contest and file court injunctions against unfair voting laws. If you have lawyer contacts, please let them know about what VPC is doing!

The video of our talk with Quentin, where he answers a multitude of our questions and gives amazing advice for helping our activism efforts, is now up on Facebook (watch here).

DA China will be continuing the Speaker Series with another voting expert, investigative reporter Greg Palast, on June 28 (RSVP here). Greg has led investigations of multi-billion-dollar frauds in the energy and finance industries for governments on three continents, and has written four New York Times bestsellers.

His new book, How Trump Stole 2020, will be released on July 14 and will cover the ways the Trump administration and the GOP are disenfranchising Americans in order to win the 2020 election, and what else we can do now to ensure our voting rights are upheld.