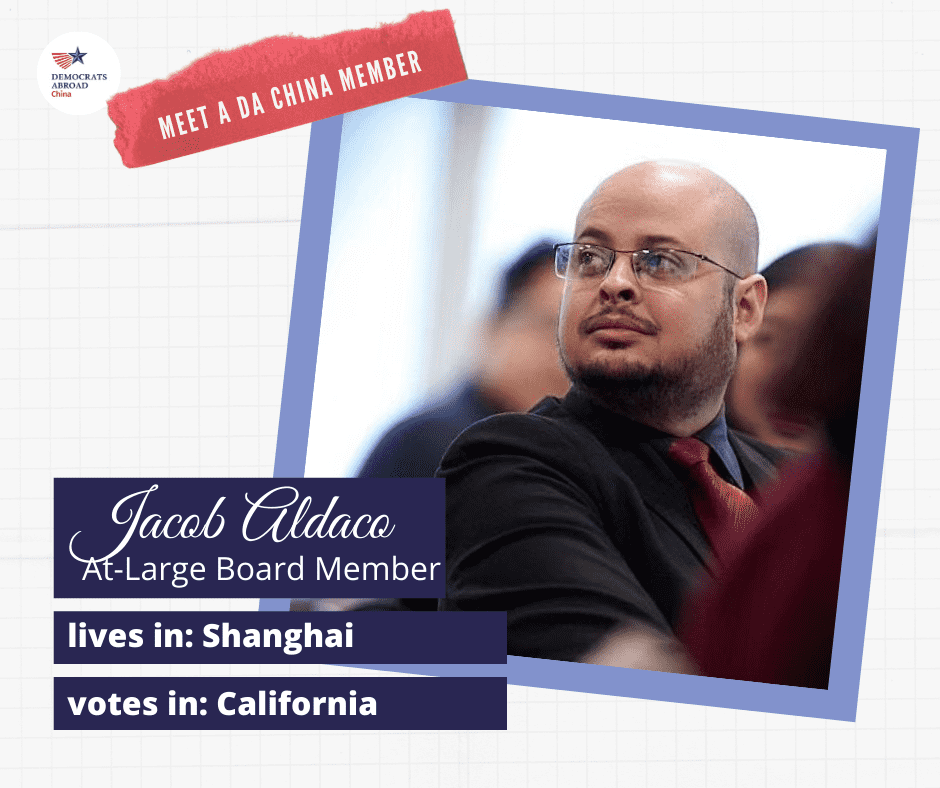 Jacob grew up in sunny southern California, about 45 minutes outside of LA. He graduated with a degree in theology and, after realizing that he wanted to pursue more of a business career, began a Master’s degree in International Business at UC Irvine. This degree included a joint exchange program that first led him to China in 2007... and when the global recession hit a year later, he decided to stay.

Jacob’s interest in politics really began to shape up in 2015. Prior to the 2016 election cycle, he had always voted Republican, and while he admitted he was at first a supporter of Donald Trump, “that support waned as soon as the then-campaigning Mr. Trump began talking more."

As someone who has lived abroad for over thirteen years - mostly China, with stints in the Netherlands and Belgium - his experiences and travels have opened his eyes up to other countries’ policies and systems and how that can often look very different from what we have in America.

Jacob explained, “that exposure to a wider breadth of policies that seemed to be very good for the welfare of citizens always left me thinking: Why can’t the US have nice things too?”

As Jacob did more research on the presidential candidates for the 2016 election, his attention turned to Senator Bernie Sanders, especially since his proposals felt on par with the more seemingly compassionate policies seen around the world.

For Jacob, “the largest inspiration from Senator Sanders was his huge push to remove money from politics, which is the biggest systemic issue that we have now. Our dreams as Americans cannot come to fruition until we do so.”

As he became more interested in politics, he also began to search for more opportunities to get involved from abroad. “Last year in October or November, I discovered that Democrats Abroad had a functioning apparatus here, and I began contributing to the Progressive Caucus, and then I got put in charge of the group! I’ve also taken part in Get Out the Vote events and other marketing activities in Shanghai.”

Jacob sees a lot of work ahead for the United States, though he is hopeful that these are goals that will one day make America a better and fairer place for everyone. If he were to become president, Jacob has an ambitious agenda he would try to push:

He’d want to start by reforming large scale campaign problems, publicly fund elections, and abolishing all medical and student debt. “I’d push for the redistribution of tax funding away from warfare and military and into research and development, arts and humanity, and a ridiculous amount into education. I’d remove all financial barriers to higher education, and would probably tap into some of Marianne Williamson’s ideas -- such as starting a Ministry of Peace worldwide. I’d also strongly consider reparations, as a segment of our brothers and sisters need to be inspired.”

After the last Leadership Meeting, Jacob has taken over a spot on the Leadership Board as an At-Large member.

"We've seen Jacob's friendliness, enthusiasm and professionalism since he first approached us as a member, and we're excited to have him join the leadership team,” said Kimberly Wong, Chair of DA China.

“He was an integral part of the huge effort in Shanghai on July 4, 2020 – which resulted in over 100 people being registered.”

If you're interested in contributing to Democrats Abroad China like Jacob, why not join our organization? We will be doing more group outreach efforts soon, so if you would like to be a part of our Get Out the Vote team especially, please add our newest WeChat ID: VoteFromAbroad.