posted by Elaine Chow | DA China - Communications IT Director
May 14, 2020 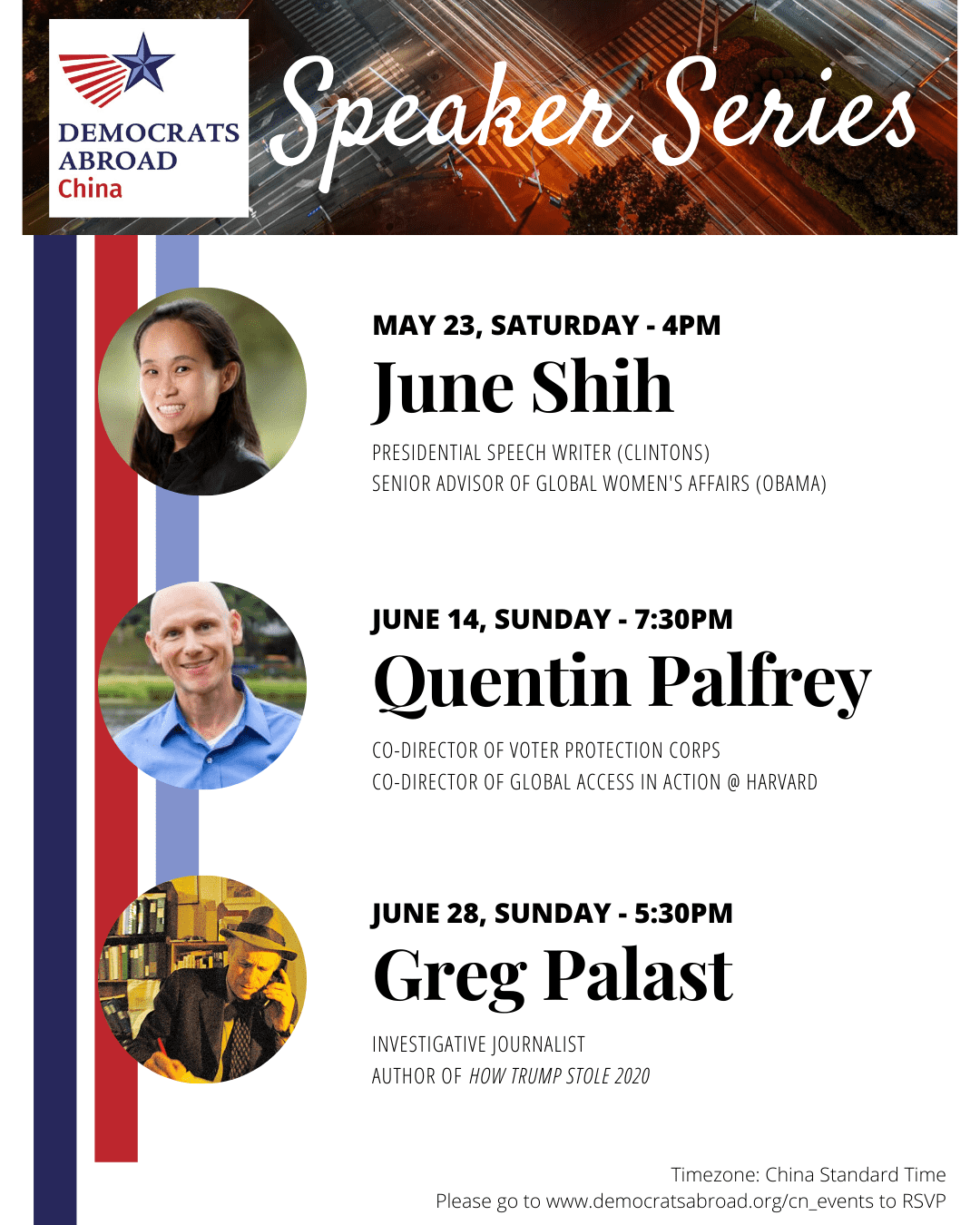 We are excited to introduce you to our speakers:
May 23, Saturday - 4pm CST - June Shih
RSVP here

June Shih has worked as a Special Assistant to the President and Presidential Speechwriter for President Bill Clinton, and as chief speechwriter for Mrs. Hillary Clinton's first U.S. Senate campaign in 2000. From 2011-2014, she served in the Obama Administration as a Senior Adviser for the State Department's Office of Global Women's Issues, shaping global initiatives on women's leadership and girls' education. Additionally, as an expert on East Asian affairs, she managed bilateral dialogues between the U.S.A. and China, Korea and Japan.
She currently serves as director of University Communications for NYU Shanghai, where she oversees all public affairs, digital communications and marketing activities. She will be talking to DA China on her career, our role as American expats in building a relationship between these two world powers, and how to encourage more political action in the AAPI community.

June 14, Sunday - 7:30pm CST - Quentin Palfrey
RSVP here
Quentin Palfrey is Chair of the Voter Protection Corps, a nonprofit organization devoted to overcoming obstacles voters face to registering, voting, and having their votes count. A nationally-recognized voting rights expert, Palfrey has led voter protection programs in several states at the presidential, senatorial, and gubernatorial level over the past 16 years. From 2011 to 2013, he was Senior Advisor for Jobs & Competitiveness in the White House Office of Science & Technology Policy under President Barack Obama. Palfrey was also the 2018 Democratic nominee for Massachusetts Lieutenant Governor.

He will be talking about the unique challenges to the 2020 election posed by the pandemic, on top of the other continuing issues of voter suppression, maladministration and disinformation. He will share what strategies for creating free and fair elections have the greatest chance of success, and the way to overcome obstacles voters face to registering, voting and having those votes counted.

Greg Palast has been called the "most important investigative reporter of our time," having broken front-page stories for BBC Television Newsnight, The Guardian, Nation Magazine, and Rolling Stone Magazine. He has led investigations of multi-billion-dollar frauds in the energy and finance industries for governments on three continents, and has written four New York Times bestsellers.
His new book, How Trump Stole 2020, will be released on July 14 and will cover the ways the Trump administration and the GOP are disenfranchising Americans in order to win the 2020 election, and what we can do now to ensure our voting rights are upheld.
WC
Do you like this post?
Tweet