As we continue with recognizing notable Latinx Americans over the course of Hispanic Heritage Month 2019, the Democrats Abroad Hispanic Caucus takes great pleasure in paying tribute to Emmy award-winning Mexican-American journalist Jorge Ramos for his many achievements in uncovering and communicating the truth in news.

Jorge Ramos was born in Mexico in 1958 but later became a naturalized U.S. citizen. He earned his Bachelor’s degree from Ibero-American University in México City in addition to completing his Master’s degree from the University of Miami. From the mid-1980s to his current Univision anchor position he has covered major world events with a critical mind and a focus on the impact that leaders and circumstance have on everyday people and the integrity of our system. 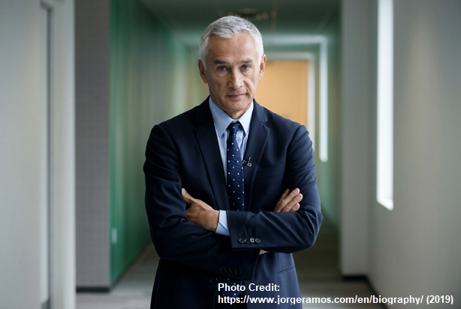 The consistent trust and admiration Ramos has earned from American media consumers is unparalleled among journalists—regardless of their political views. Unafraid to speak honestly or have an interviewee speak frankly, Ramos has proven himself essential to the health and longevity of our democracy because he has repeatedly rejected challenges by those in power who try to silence his right to exercise his First Amendment rights to free speech and freedom of the press.

With a lifetime of accomplishments as a serious and globally-respected media professional, Ramos is not only an exemplar of immigrant success but is also a role model in the Latino community.  Moreover, he is a product of what American civil society broadly values with his determination in seeking the truth for news stories and his bilingual messaging distributed to both English- and Spanish-speaking audiences.

From Ramos’ work promoting literacy to his commitment to modern journalism as a way to demand accountability and ethical behavior from our government, his awards and achievements are too numerous to mention in detail. Jorge Ramos knows that his credibility as an independent, non-partisan journalist is always at stake. Yet, as a titan among journalists, he continues to ask the tough questions to world leaders in order to get direct quotes from them on issue stances and policy intentions.

This month the Democrats Abroad Hispanic Caucus proudly salutes this great Hispanic-American and we anticipate that he will continue to perform a vital media communications role in this day and age of so-called “fake news.”