For the first six years of my life, I lived in Ohio’s Twelfth Congressional District. Located in the heartland, this working-class area spans seven counties and covers from the northern suburbs of Columbus to the rural areas further north. One individual from my congressional district, however, stands out as a true champion for Ohio’s Latino communities. This notable Latina’s name is Lilleana Cavanaugh. Because of her efforts in community organizing and educating Latinos on the responsibility of civic duties that comes with U.S. citizenship, the Democrats Abroad Hispanic Caucus is proud to honor her during Hispanic Heritage Month 2019 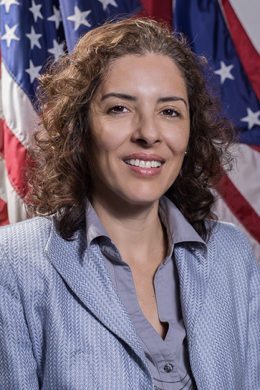 Like many Latinos, Cavanaugh has had to work hard for everything she has earned and is a true immigrant success story. Originally from Costa Rica, she has been hard at work for over two decades working with many communities across Ohio. These days, she is armed with an MBA and is now the executive director of the Ohio Commission on Hispanic and Latino Affairs (OCHLA). Under Cavanaugh’s leadership, OCHLA has done amazing work by empowering Hispanic leaders across the state and providing a platform for Latinos to contact their elected officials.

Among the various tasks as OCHLA’s executive director, Cavanaugh educates newly-naturalized citizens about voting. “Their vote matters. That civic engagement is a very crucial part of being a good American,” according to her commentary during one interview. And unlike the oft-spread falsehoods by Republicans such as immigrants are “struggling” and “refusing” to learn English and other related myths, Latino leaders, such as Cavanaugh have always encouraged full cultural assimilation of immigrants. According to Cavanaugh, “We always recommend that newcomers build friendships quickly and not isolate themselves. To feel accepted and to feel welcome is something all immigrants want.”

Latinos are undeniably a part of the fabric of virtually every statewide profession. Cavanaugh knows full well that even in the 21st century, Latinos still face major challenges such as access to quality education and health care in addition to facing various forms of voter suppression, stereotypes and racism. For these reasons, she continues to play a critical public service role with OCHLA by advising the governor and state legislators on issues affecting Latinos, promoting collaboration, building Latino community organizations and strengthening their staff leadership, and assisting and educating immigrant families with transitioning into the state.

While the current administration spews anti-immigrant rhetoric and speaks of building “walls,” it is no secret that our nation is far better off with immigrants like Lilleana Cavanaugh who perform their work by building “bridges” from one community to the next. Again, this Hispanic Heritage Month, I, as a proud Ohioan, along with the global Democrats Abroad Hispanic Caucus, pay tribute to notable Latina trailblazer Lilleana Cavanaugh for her admirable efforts in strengthening Ohio’s Latino families.