The first Latina elected to represent California’s 44th district, Rep. Nanette Diaz Barragán is a natural-born fighter for families, economic justice, and immigrant rights. Whether crossing the border to meet with asylum seekers, confronting insulin manufacturers over skyrocketing drug prices, or backing a bill to hold Donald Trump accountable, Barragán appears unacquainted with the concept of backing down. 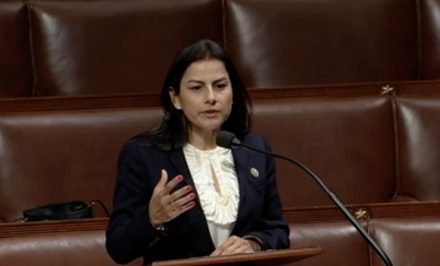 Perhaps that fearlessness comes from her early experience beating the odds. The youngest of 11 children raised by immigrant parents from Mexico, Barragan’s father was a repairman in her hometown of Harbor City. Her mother -- whose education stopped at 3rd grade -- cleaned houses and worked in factories. If Barragán fights for the working class, it’s because she knows their challenges firsthand. But none of those challenges stopped her from going on to get degrees from UCLA and USC’s law school and ultimately earning her path to the U.S. House of Representatives through grassroots organizing.

Barragán’s work on behalf of the Hispanic community is tireless and wide-ranging. This year, she co-sponsored the Dream and Promise Act of 2019, putting forth protections and a pathway to citizenship for more than 2 million DACA, TPS and DED recipients. She has battled the Trump Administration’s border policies on every front. As a member of the House Homeland Security Committee, she has traveled to the border multiple times to confront the realities on the ground, spoken out against border wall funding, and  introduced legislation to provide mental health care for children separated from their families. She is also active and vocal against Trump’s efforts to rig the 2020 census, which could result in a vast undercounting of immigrant communities—and therefore slash needed federal funding for critical government services.

One of Barragán’s other great passions is as big as Earth itself. From her days on the Hermosa Beach City Council, she has proven herself a staunch defender for the planet, standing up to oil companies, promoting environmental responsibility and decrying what she calls “systemic environmental racism” that disproportionately affects people of color.

Whether she is attending an Earth Day gathering in Watts, investigating border detention conditions at the border, or grilling Big Pharma chiefs on Capitol Hill, Barragán never forgets where she came from, and she never loses her fighting spirit. We expect her to keep up the fight for years to come. Because it is clearly obvious that this Latina’s fighting spirit is always working on behalf of the American people, the Democrats Abroad Hispanic Caucus is pleased to honor Rep. Nanette Barragán this Hispanic Heritage Month.