The incredible story of teenage Cuban-American Emma González involves her experiencing a tragic and traumatic school shooting event, and courageously transforming that rage and sadness into powerful messaging as a leader in the anti-gun violence movement. With nothing but praise and encouragement for this young woman, the Democrats Abroad Hispanic Caucus is proud to recognize Emma González as a notable American figure during this Hispanic Heritage Month. 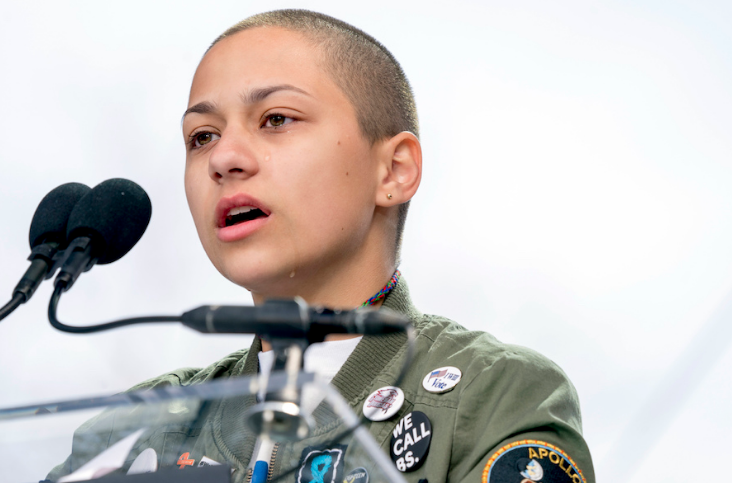 On February 14, 2018 in Parkland, Florida, a former student of Marjory Stoneman Douglas High School entered the campus armed with an AR-15 assault rifle and murdered seventeen people. As survivors of the shooting, Emma and her classmates faced unimaginable horror and sorrow from the shooter’s act of cowardice, but soon after became motivated to co-found March For Our Lives, an organization whose mission is to register Americans to vote and to press lawmakers for common-sense reforms to the nation’s gun laws.

Since the shooting, Emma and her former high school peers have traveled the country registering voters, talking to people about the level of unnecessary gun violence, and encouraging political advocacy. Those opposing gun control have confronted her at every step of the way, including comments such as, “The only way I’ll talk to you is if you’re on the other end of my AR-15.” Despite the numerous threats and implied threats she has received, Emma continues to push forward with peaceful protesting and seeking societal change.

In an incredibly powerful speech on March 24, 2018 in Washington, D.C., Emma paused for 6 minutes and 20 seconds to demonstrate the time it took for her school’s shooting to take place. To say this speech was “moving” would be an understatement.

Emma graduated from High School that same spring and is now attending college. She is one of the most prominent voices in the #NeverAgain movement, and has inspired many young adults to pay closer attention to elected officials and hold them accountable for safety responsibilities in America’s communities. Emma was asked if she will ever pursue a life in politics in which she responded no. We in the Democrats Abroad Hispanic Caucus sincerely hope she changes her mind.

“People say, ‘I don’t play the politics game, I don’t pay attention to politics’ — well, the environment is getting poisoned, families are getting pulled apart and deported, prisons are privatized, real-life Nazis live happily among us, Native Americans are so disenfranchised our country is basically still colonizing them, Puerto Rico has been abandoned, the American education system has been turned into a business, and every day 96 people get shot and killed… You might not be a big fan of politics, but you can still participate. All you need to do is vote for people you believe will work on these issues, and if they don’t work the way they should, then it is your responsibility to call them, organize a town hall and demand that they show up — hold them accountable. It’s their job to make our world better… This isn’t something we are ever going to give up on.” – Emma Gonzalez, in an Oct. 5, 2018 New York Times opinion piece.