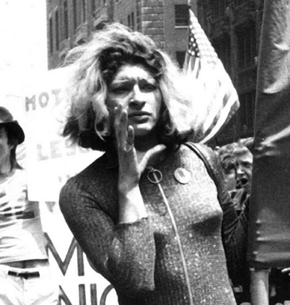 Rivera is most remembered for her involvement in the “Stonewall Uprising.” In 1969, New York City’s Stonewall Inn served as a sanctuary for members of the lesbian, gay, bisexual, transgender, and queer (LGBTQ) community from persecution by police and society at large. One morning in June, police raided Stonewall and arrested several persons on bogus charges such as “prostitution” – simply because their sexual identity differed from societal “norms.” This event immediately triggered protests and set the stage for police confrontations with very visible activists such as Rivera. The Stonewall Uprising was significant in that it led to area residents to begin organizing LGBT activist groups, identify LGBT-friendly establishments, allow for the creation of gay pride parades, and other notable achievements in the LGBT equality movement.

As a leading pioneer for pushing for LGBT rights, Sylvia Rivera deserves to be included in all U.S. history textbooks. Her childhood (she was born Ray Rivera) was full of tragedies starting from her father abandoning her and her mother committing suicide. For years she was a tireless advocate for the LGBT homeless community, those affected by HIV/AIDS, and fought for drag culture and transgender individuals’ inclusion within the wider gay rights movement. Unfortunately, liver cancer stole Rivera from us in 2002.

Martha McDevitt-Pugh, a Democrats Abroad representative to the Democratic National Committee and Chair of the Democrats Abroad Global LGBT Caucus, adds, “As an early leader of the LGBT+ movement, Sylvia Rivera worked for inclusion of the most marginalized groups in the struggle for equality. The gains made by the LGBT+ community would not have been possible without leaders like Sylvia who demanded acceptance and racial and economic equality for all, leaving out no one and nothing, and giving voice and visibility to the most disadvantaged groups. Let her be remembered as one of the heroes who stood for equality for all.”

Last year, in discussing Rivera and other activists at the 1969 riots, transgender poet Chrysanthemum Tran stated that they should not be remembered solely for the Stonewall event but rather for their lifelong work of organizing and activism. We agree.

Our Hispanic Caucus holds the firm belief that no individual in the United States of America should have to fear being the target of violence because of who they are or who they love. We condemn all types of violence and discrimination against the LGBT community, and ask elected officials to commit to fully funding research in areas of hate crimes and discrimination against those of all sexual orientations and sexual identities. Furthermore, we urge U.S. representatives to swiftly pass the currently-pending House resolution recognizing the 50th anniversary of the Stonewall Uprising (Senate version here) in addition to the House resolution encouraging the celebration of the month of June as LGBTQ Pride Month.