Defending and Expanding the Senate 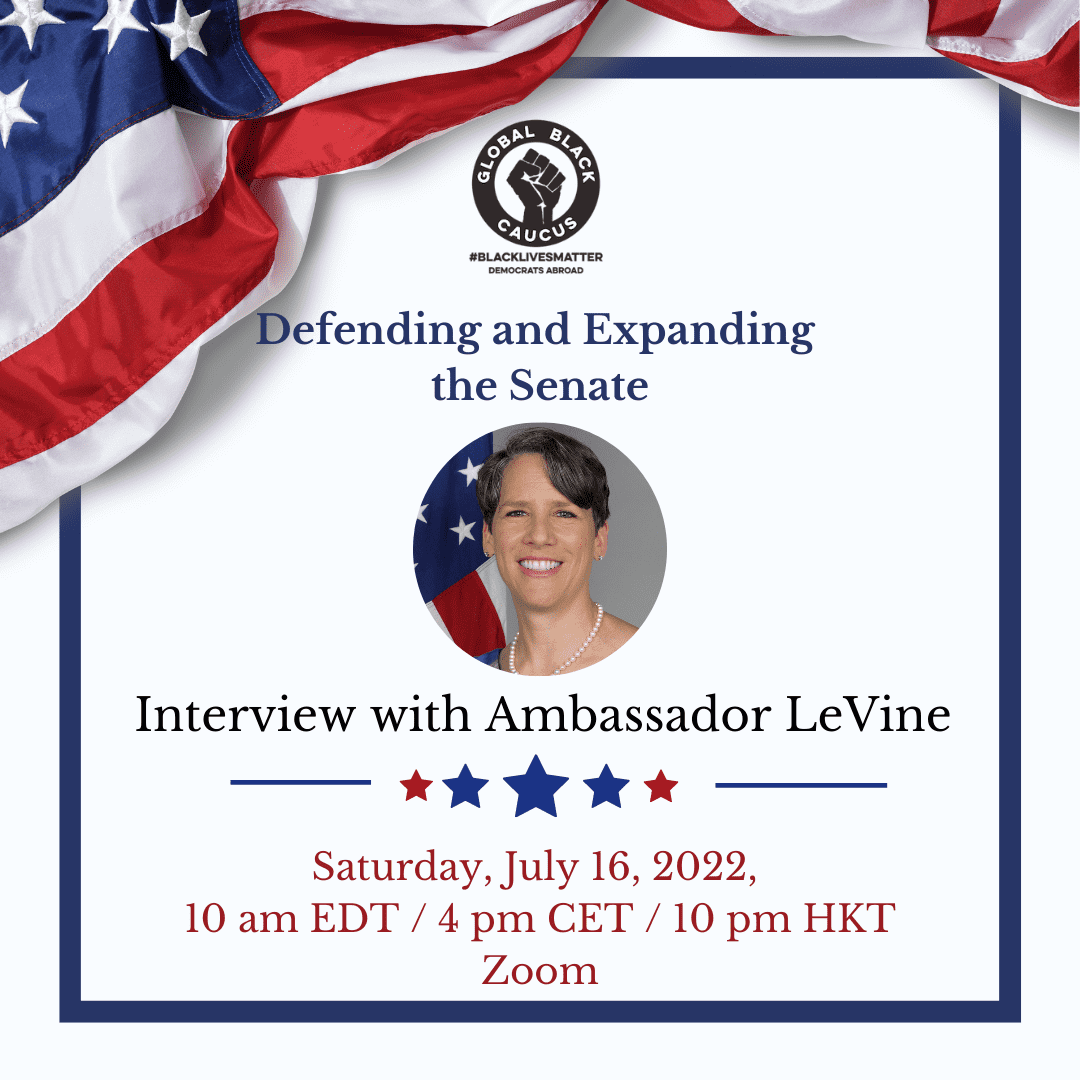 Join us on Saturday, July 16, 2022, 10 am EDT / 4 pm CET / 10 pm HKT  during an insightful and empowering conversation with Ambassador LeVine on how to Expand and Defend the Senate and what we, as Democrats Abroad, can do to save our democracy.

This is a prerecorded interview during which members of Democrats Abroad Switzerland had a one-on-one opportunity to ask questions and express their thoughts on the upcoming midterm elections.

Ambassador LeVine was sworn in as the United States Ambassador to Switzerland and Liechtenstein on May 30, 2014, and took up her position in Bern on June 2, 2014. LeVine took her oath of office while placing a hand on a Kindle containing the U.S. Constitution and, thereby, became the first U.S. official to be sworn in on an e-reader. She resigned from her post in Bern on January 20, 2017. On July 9, 2018, she joined Governor Jay Inslee's cabinet as the new Commissioner of the Employment Security Department.

At the outset of her Ambassadorship, she conducted a lengthy listening tour to understand the opportunities and areas for growth in the relationship.

Building on those conversations, she and the Embassy team collaborated closely with their Swiss counterparts to drive outstanding economic results, increase a long-term focus on global security, and raise awareness and appreciation for the countries’ respective policies, values, and cultures.

Among the many achievements resulting from that collaboration are the first-ever bilateral White House company roundtable, at which eight Swiss companies announced $3 billion in investments in the following year alone; cooperation on an initiative with a broad array of Swiss companies to implement Swiss-style apprenticeship programs in the United States; and support for funding efforts to launch GCERF (The Global Community Engagement and Resiliency Fund), a multi-lateral organization aimed at countering violent extremism.

What prepared Suzi for her role as Ambassador was her diverse and non-linear career focusing on education, technology, community, innovation, travel, social responsibility, and youth outreach.

In a professional capacity, she worked at Microsoft as a Director and at Expedia as a Vice President.  Twice during her career, she was a stay-at-home mom, during which time she co-founded two non-profit organizations – an innovative Jewish community model, The Kavana Cooperative, and an advisory board for an early learning research institute at the University of Washington, ILABS – the Institute for Learning and Brain Sciences.

Suzi is a graduate of Brown University with a Bachelor of Arts in English and a Bachelor of Science in mechanical engineering with aerospace applications.  She and her husband have two children, with whom they enjoy hiking, biking, traveling, and playing with their dogs.

In 2021, LeVine served as the acting Assistant Secretary of the Employment and Training Administration (ETA) under the Biden Administration. She resigned after seven months citing the job's impact on her family.

LeVine has volunteered as a community organizer and resource raiser for several Democratic campaigns, most notably, for Obama for America. She currently serves as a Deputy National Finance Chair for the DNC and as an Advisory Council Member for the NDRC (National Democratic Redistricting Council).