The Day My Vote Didn’t Count: A Cautionary Tale and a Word of Wisdom for Voters Abroad 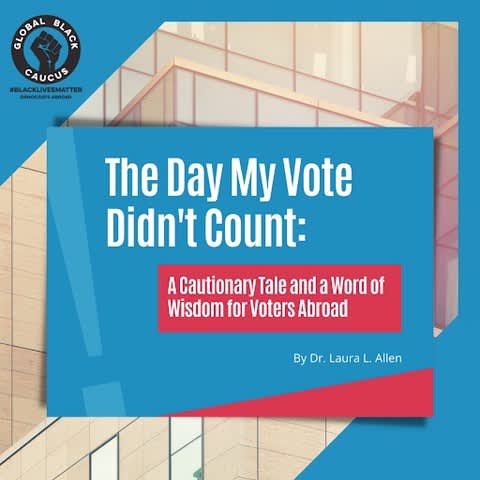 The Day My Vote Didn’t Count: A Cautionary Tale and a Word of Wisdom for Voters Abroad

Like many of you, I was excited and eager to vote in the 2020 presidential election. I am a New York State voter living and working in Toronto, and it was my first time voting from abroad. I requested an absentee ballot from my local board of elections, received it shortly after, and immediately completed the ballot and returned it by mail. I followed up with my local Board of Elections and was happy to hear that my absentee ballot had made its way across the border. My vote for President Joe Biden and Vice President Kamala Harris (and many others) was officially cast.

By the time the 2021 general election came around, I felt like a pro! I requested my absentee ballot and received it with plenty of time left to fill it in before the election. Here’s where the story takes a turn. I got caught up in the hustle and bustle of everyday life and found myself mailing my absentee ballot the day before election day. I knew it wouldn’t arrive before the election, but I knew that it would still be counted if it was postmarked the day before. I quickly found my way to the nearest Canada Post, which was neatly tucked in the front corner of a Rexall drugstore. I asked the postal worker if the envelope would be postmarked for that day, and they assured me that it would be. I even paid for postage and tracking. Success just in time, right!? WRONG! After following up with my local board of elections, I learned that my absentee ballot did make it shortly after the election but was not postmarked. And guess what? I was not the only one in that pool from Canada. Without a postmark, there was no proof that I had mailed the absentee ballot before election day, and therefore my vote was not counted.

Dear reader, I was seething with anger! As someone who teaches about race at the university level, I know the importance of voting and the sacrifices so many Black Americans and allies made so that I, a Black woman, could vote in ALL elections. I was equal parts angry at the Canadian post office system and equal parts angry at myself for waiting until the last minute. You see, if I had mailed it earlier, there was a possibility that the ballot could have arrived before the election and would be counted (as the postmarked date doesn’t matter in that case). This general election had so many candidates and propositions that were important to me and my family members back in New York. Yet, I did not move with the same promptness and eager pace as I did in the last election. I tried to resolve the issue, but the receipt was not enough to cure the ballot. Now that I’m on the other side of this situation, I write this as a cautionary tale for voters abroad (especially if you are new to this).