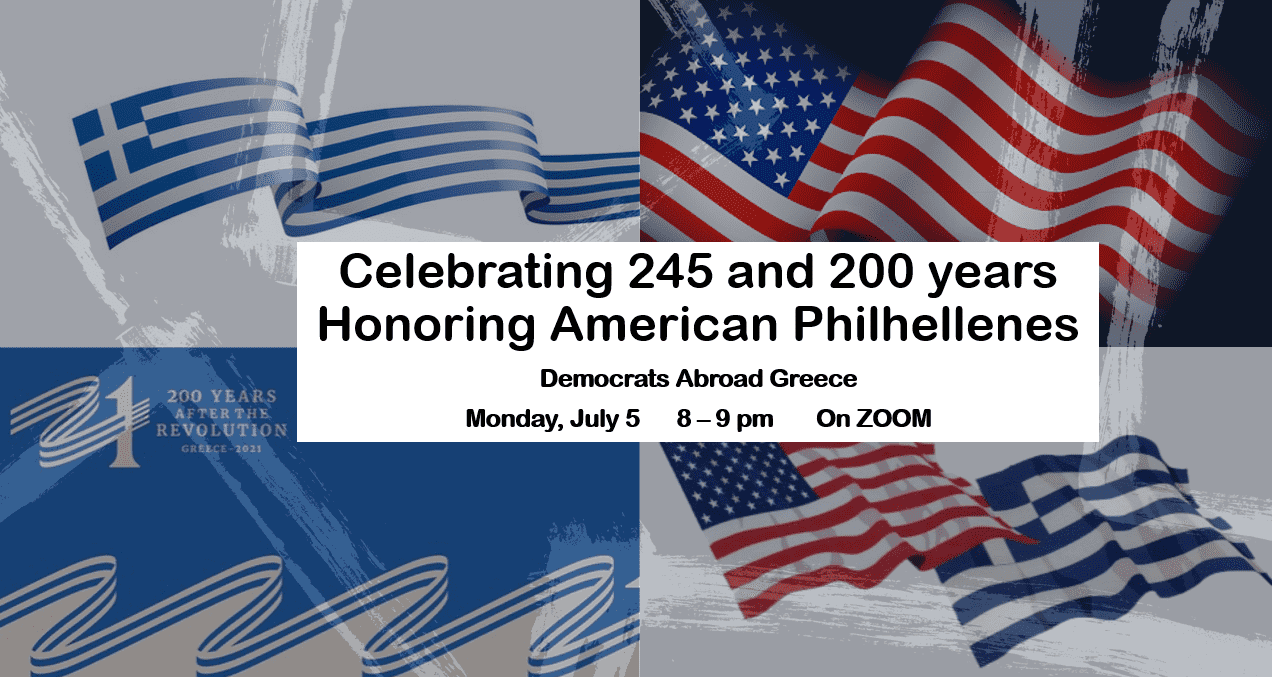 O Constandinos Vellentzas, founder of the recently launched Philhellenic Museum in Athens, and Maria Georgopoulou, curator of the Philhellene Exhibition at the Gennadius Library at the American School of Classical Studies, will also contribute to the program.

O Students from the American College of Greece will offer short presentations.

He has served in Germany, the United Nations in New York (32nd General Assembly), and New Orleans, Louisiana, as Consul for Greece with jurisdiction over eight states in the south of the United States.

During his time in New Orleans, he was instrumental in establishing the Center for Greek Studies at the University of Florida before moving to his next assignment as First Secretary of the Embassy of Greece in Washington, D.C.

His subsequent assignments include four years as Faculty Advisor with the NATO Defense College in Rome, followed by his assignment as Minister at the Embassy of Greece in Rome and then as Ambassador to Iran, to Belgium, and to Indonesia, with parallel accreditation to Malaysia Brunei Darussalam, and Timor-Leste.

Ambassador Tsikouris has also served as the Permanent Representative of Greece to the Association of Southeast Asian Nations (ASEAN).

Throughout these assignments, he crafted numerous articles and delivered lectures to academic institutions across the United States and other countries.

Upon retirement in 2010, he became a U.S. resident and subsequently joined a US Law Firm as Foreign Affairs Advisor and was instrumental in various business development projects using his vast international connections and contacts. Indicatively, through his efforts, an Agreement on Economic Cooperation was signed at the State House of Arkansas in Little Rock, between Governor Asa Hutchinson and the President of Dong Nai Province of Vietnam (June 29, 2015).

Since 2019 Ambassador Tsikouris, has served on the Leadership Council of the Sustained Dialogue Institute (based in Washington, DC).

He currently resides in Voula, Greece, with his wife Alexandra-Theodora Tamviskos, a Greek-American, and their 17-year-old son Harry.

AWARDS AND KEY ACHIEVEMENTS:
- Award for the Creation of the Hellenic Arts Society, New Orleans, Louisiana (1983).
- Award in recognition of four years of meritorious service to the North Atlantic Treaty Organization and the NATO Defense College (Rome, Italy, July 14, 1995).
- Award by the American Club (given at the Port of Piraeus, April 2007) for initiatives and negotiations with Pakistani authorities that led to an agreement regarding the “Tasman Spirit” oil spill of July 2003 and the release of Greek sailors that had been detained in Karachi for more than nine months.
- Citation by the Greek Minister of Foreign Affairs for initiating and organizing rescue and repatriation efforts of Tsunami victims in Thailand (Dec. 26, 2004).
- He initiated an agreement with his Turkish counterpart in a meeting in Ankara (October 17-18, 2002) whereby approximately 1400 illegal immigrants were readmitted to Turkey.