2018: A Great Year for Democrats in Western Sweden

Democrats in Western Sweden had an event-filled year while increasing our membership by about 25% and inspiring even many non-members (other Americans in Sweden) to vote in the very successful Mid-Term Elections. A few events are already highlighted with stories and pictures below: March for Our Lives gun-control demonstration, two Tax Events & Protests, and a very full Euro-Pride Week.

Early in the year we had several fun phone-banking parties at Frank & Gunilla Beal's home.

In May we attended the John Steinbeck play The Moon is Down -- about Nazi tyranny in Norway -- and starring our fantastic chair Kim MacKay.

We had five voter registration events including ones in Halmstad and Borås and a Sunday brunch.

In June went out to the ballgame (baseball) -- complete with Franks's wonderful crackerjacks! -- with the Göteborg Sharks (Hajarna)!

In August we toured Nordens Ark and met new members in Bohuslän!

In December we attended the new Glenn Close movie The Wife --- about the Nobel Prize in Literature -- and heard inside stories from our member Fredrik Gildea who has a part in the movie!

Throughout the year we had monthly Last-Tuesday Afterworks (and one special one, after the election), many with special themes -- bilingualism, problems with our democracy, varieties of democracy, U.S. taxes, food waste, bicycling across North America -- as well as several focused on the election and results.

Naturally all these events required at least seven Steering Committee and Event Planning meetings -- most if not all magnificently hosted by Carry Cooper and Bill Collier -- as well as a constant stream of communications.

Thanks to all our Steering Committee and other volunteers for helping with this wonderfully successful year!

Within a few months we need to elect (or re-elect) our officers and other Steering Committee members. If you'd like to get involved, please get in touch!

We had a WONDERFUL experience with EuroPride Week in Göteborg this year! Besides a panel discussion on Friday with Martha McDevitt-Pugh (chair of DA's Global LGBT Caucus) and Ian Higham (DA-Sweden member and political researcher) during the Human Rights Conference (with moderator Maria Sjödin, former chair of RFSL)

and that evening a "DNC reception" with Martha and our own Adrianne George (both are elected DNC members representing Democrats Abroad),

we had a literature/information booth several days where we gave out hundreds of Elect a Clown/Democrats Believe cards,

and then we marched in the parade on Saturday and gave out at least a thousand more!

In alignment with DA globally, we have a focus on tax problems that Americans abroad face because of our U.S. citizenship. Previously we've called and written postcards to Congress expressing our displeasure with the way that FATCA and FBAR affect us, as well as the frustration and expense of having to file U.S. income taxes, only -- in most cases -- to end up not owing anything (other than, in many cases, paying tax professionals to prepare the returns!). We're not fat-cat tax cheats, we're ordinary Americans who happen to live abroad.

Our Last-Tuesday Afterwork in May featured Lisa Stefani, an American tax professional (and IRS enrolled agent) resident in Western Sweden who talked and answered questions about filing FATCA, FBAR, and income tax forms. We very much appreciate Lisa's sharing her knowledge!

Then we were joined this past Saturday by former DA-Sweden chair Deedee Gierow -- making a special visit here from Kalmar -- who updated us on DA's global efforts to lobby successive Administrations and Congress for relief from citizenship-based taxation (by changing to residence-based taxation), or -- failing that -- for a same-country safe-harbor exemption from filing FATCA and FBAR (so that neither we nor banks would have to report accounts in the country where we live), or -- failing that -- for merging FBAR and FATCA filing into a single procedure to at least relieve some of the unnecessary burden. Deedee is a member of DA's global Taxation Task Force (our volunteer research and lobbying team) and, among other things, has been door-knocking on Capitol Hill many times, attempting to persuade legislators and their staffs to take our issues seriously.

Deedee emphasized that the more votes we can turn out from overseas, the more clout our volunteer lobbyists will have when they enter those Congressional offices. One of the first questions that staffers and legislators ask is, "How many votes have you got?"

So that's one more reason -- besides saving democracy, saving the planet, etc. -- for us to get out the vote in this critical election year!

But meanwhile, tax deadline for us overseas is June 15, and we encourage all Americans abroad to contact Congress and express our unhappiness with citizenship-based taxation and with the way that FATCA and FBAR are applied. That way, when our volunteer lobbyists walk into a Congressional office and ask -- "Have you been hearing complaints from Americans abroad about the tax-reporting system?" -- they will say YES!

March For Our Lives

In support of March for Our Lives in Göteborg today! Our chair Kim MacKay led a brief but moving memorial service for the 17 victims in Florida, Michael Czarnecki took pictures (more to come), and SR (Sveriges Radio) interviewed member Hanna Mahaffey and posted the picture below. Thanks to all Democrats Abroad members and friends who came and brought signs!

Britt-Marie Mattsson in GP: "In Göteborg DA manifested in solidarity with demonstrators in the USA."

Heartfelt thanks to Michael Czarnecki for photos!

On Sunday member Hanna Mahaffey -- who is an official Paddan guide -- gave us a wonderful tour in the “party boat" of Göteborg's moat, canal, and river harbor -- including under many LOW bridges! -- giving us bits of the city's history and pointing out landmarks along the way. We even had a bit of a sing-a-long (thanks Jennifer and Emma)! We had 44 members and guests, including several potential new members and some (very) young Democrats! We also offer a huge thanks to our pilot, Hanna's friend ALSO named Hanna! 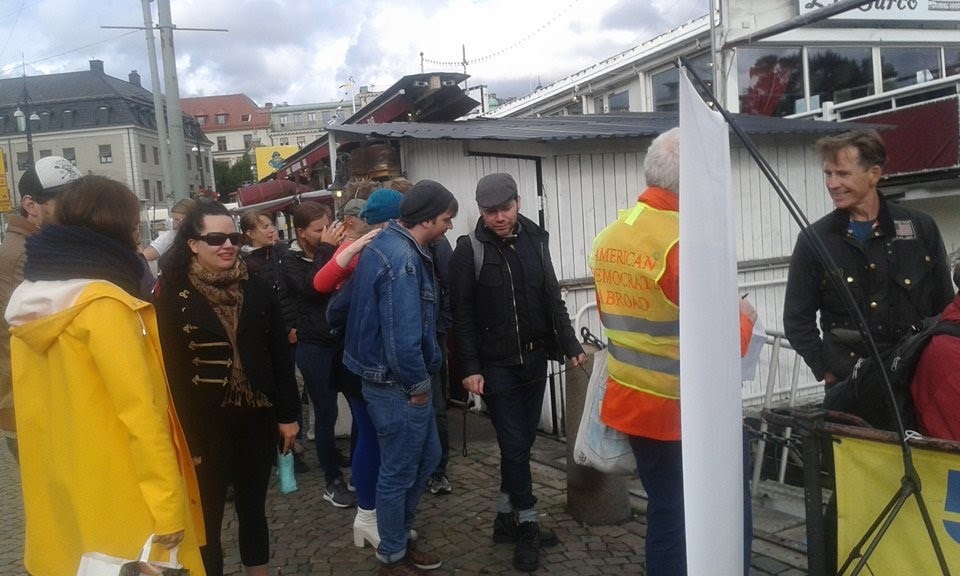 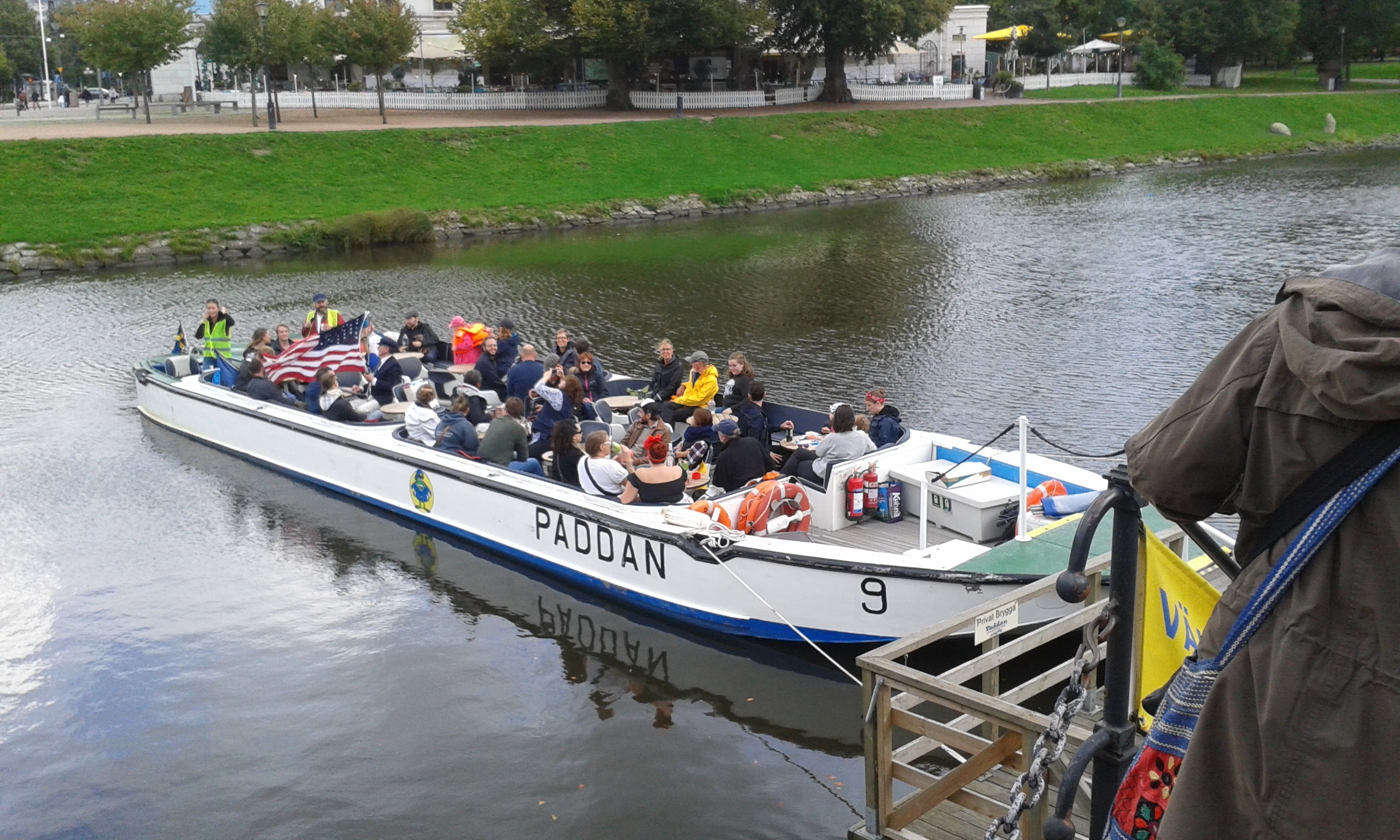 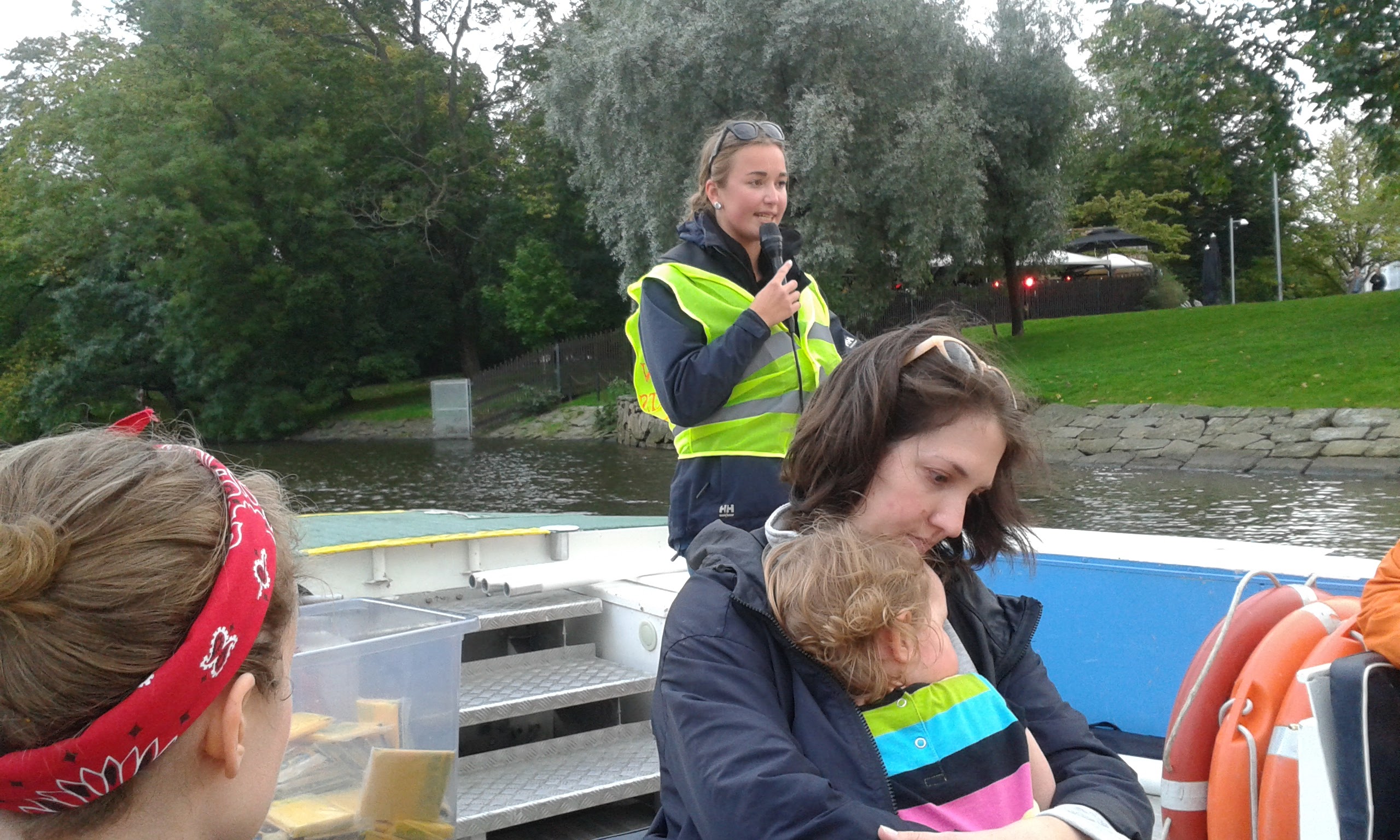 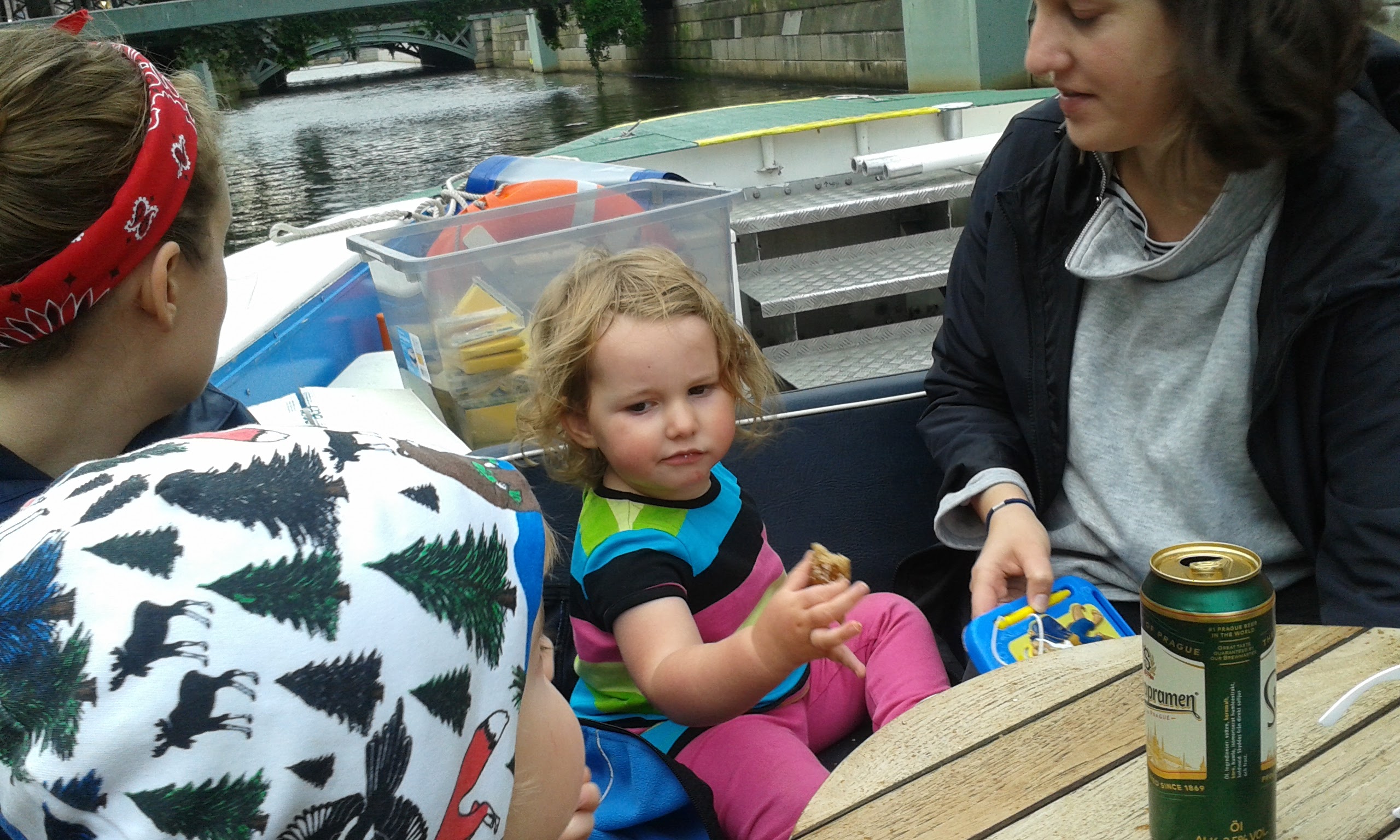 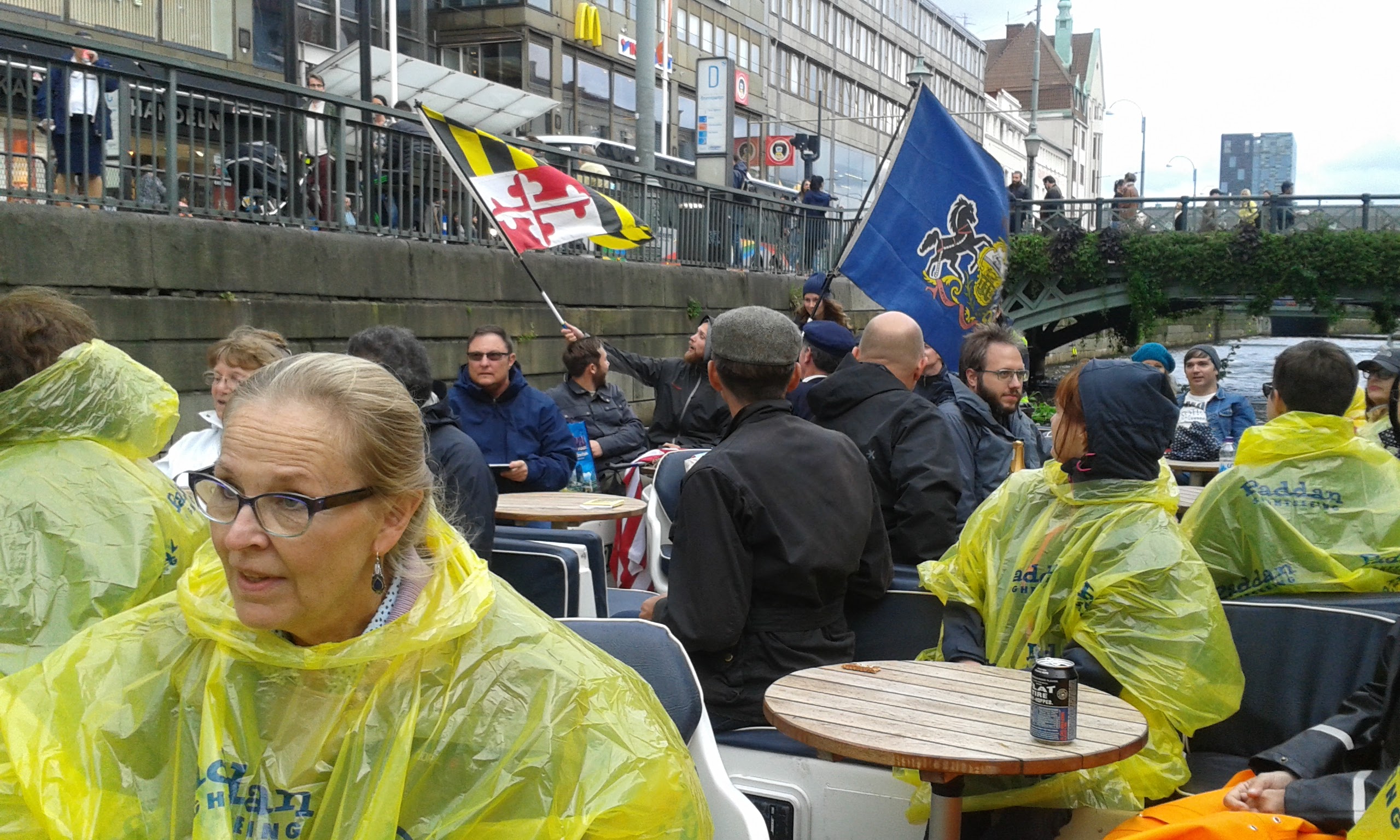 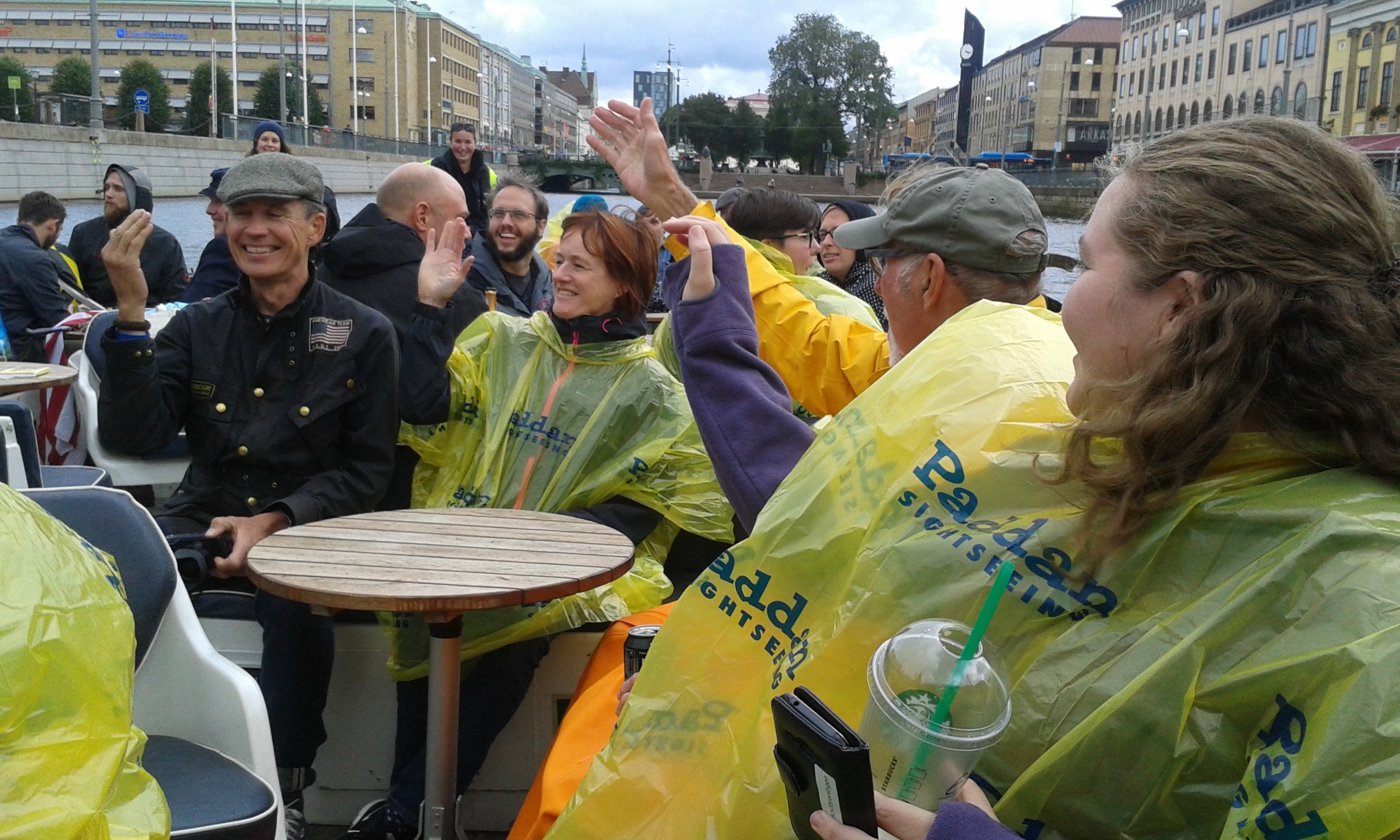 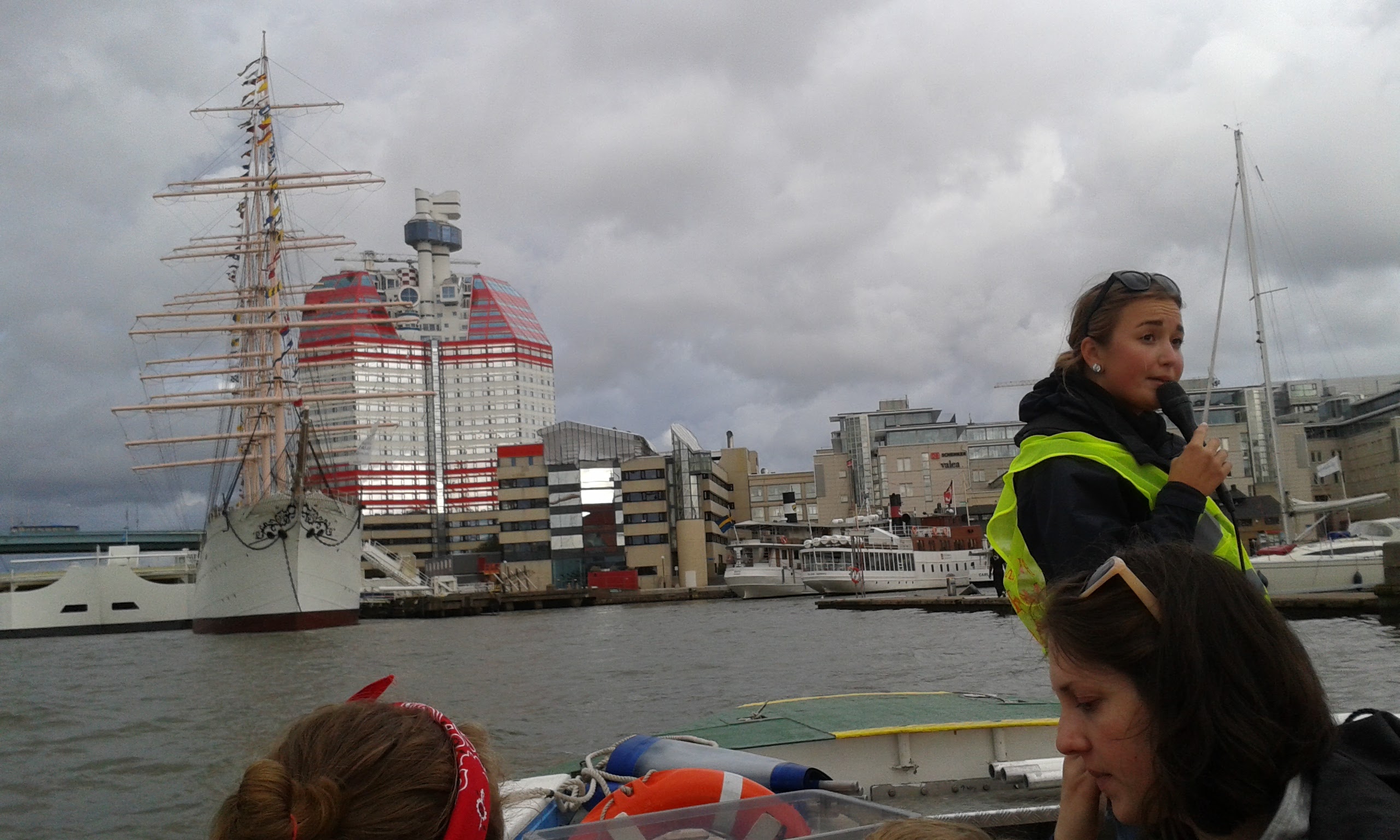 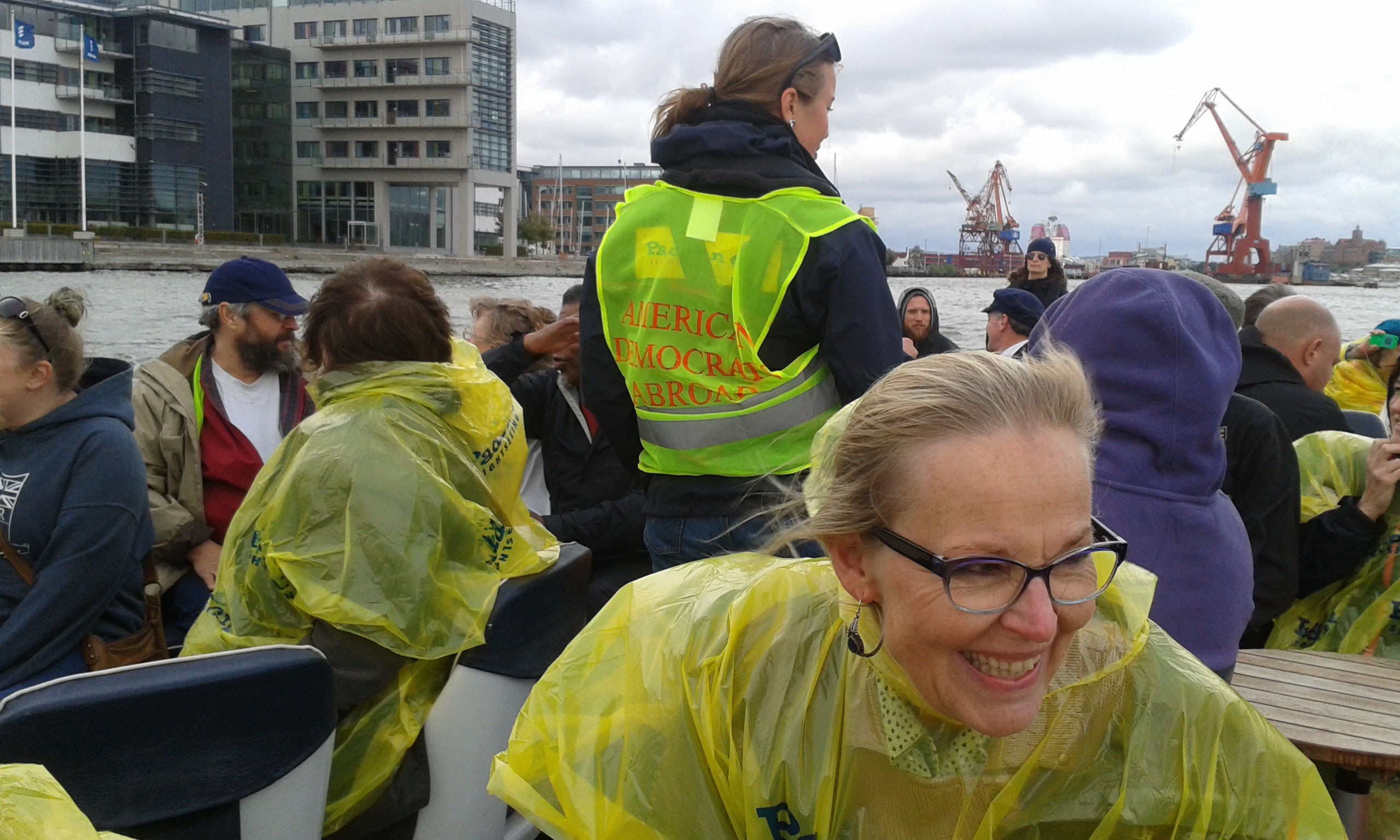 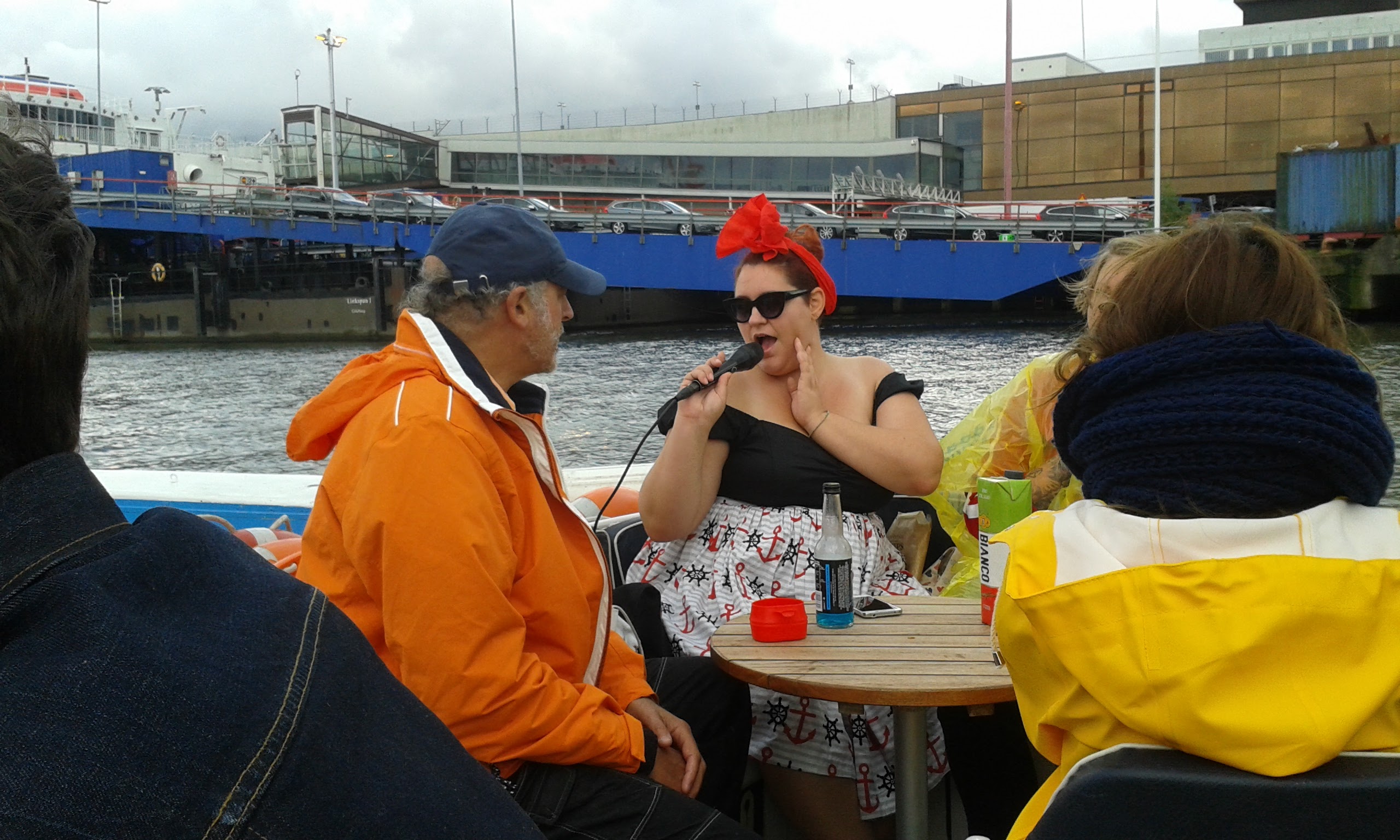 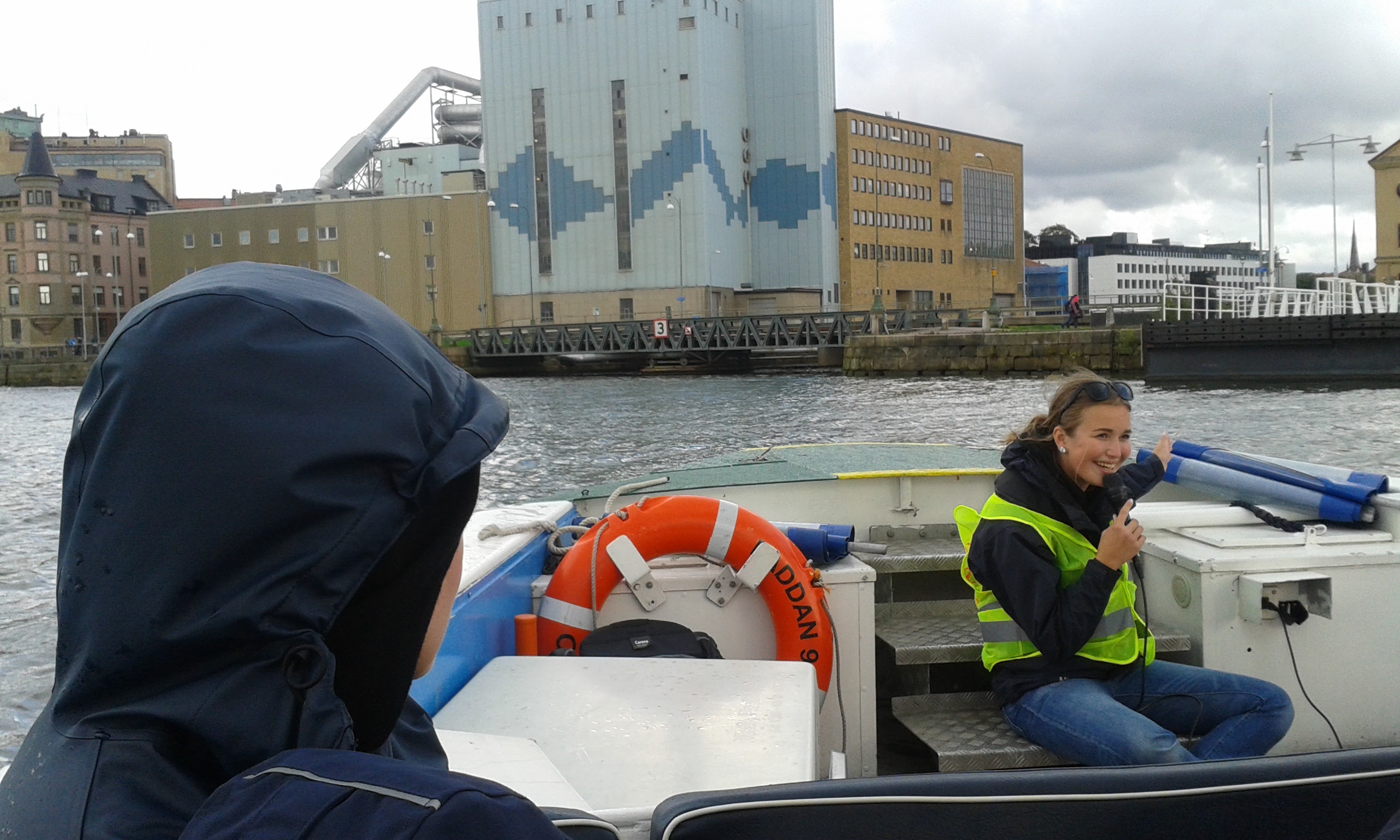 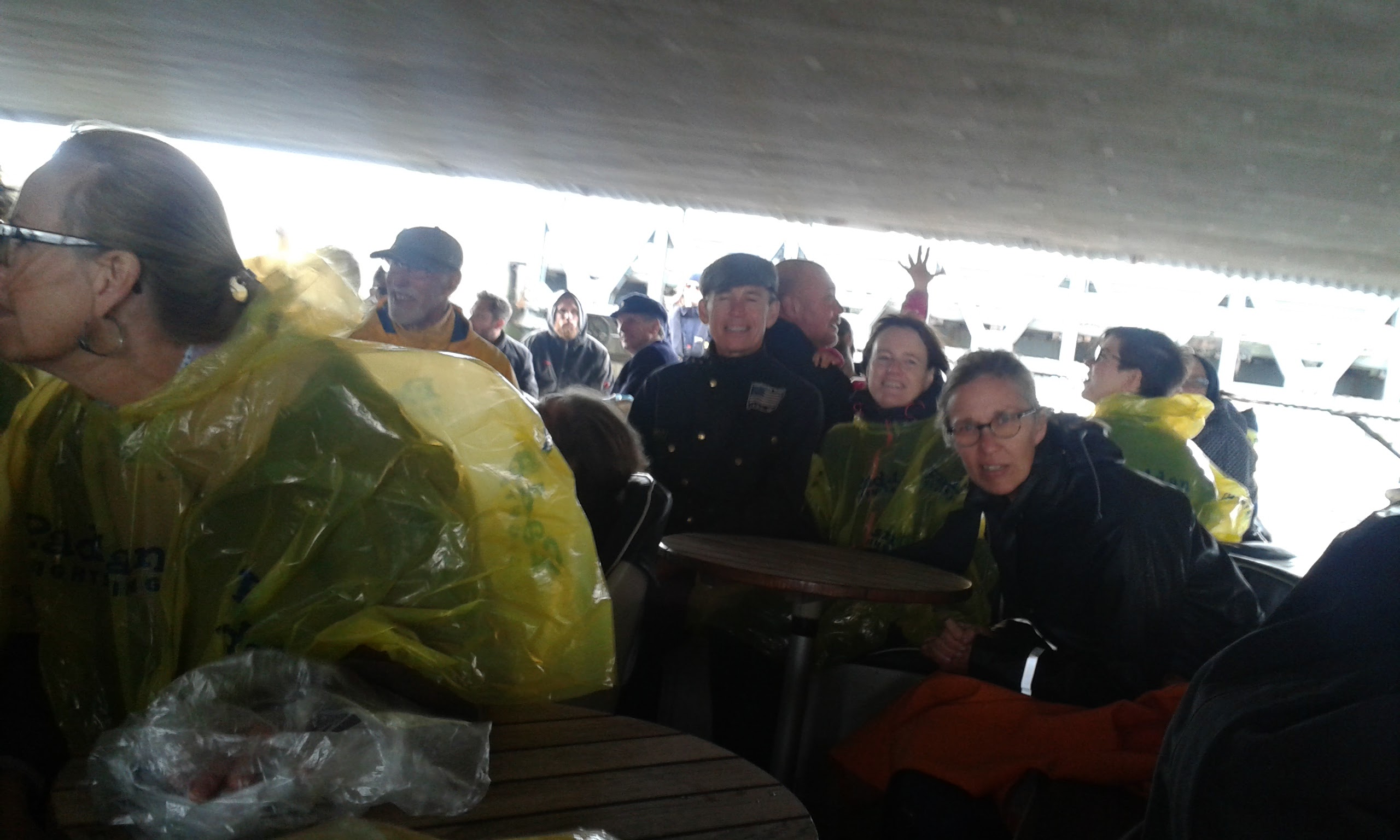 We had a very successful Unite Against Hate manifestation at St. Andrews Church to protest the white supremicists, neo-Nazis, and KKK recently spewing racism, anti-Semitism, and hate in Charlottesville, VA, and in favor of inclusiveness, diversity, and tolerance. The event on Saturday afternoon 26 August coincided with similar events in Stockholm and Malmö. It was our first event in conjunction with St. Andrews Church and we expect it won't be the last. We had 53 people in attendance including many we hadn't met before.

Our chapter chair Kim MacKay led the event, with Rev. David Bruce, church pastor, speaking movingly in introduction (see pictures below). Jacques Labouchere on guitar and Alex Sharp Cole on piano each (and sometimes together) provided lovely and moving music. Actor Brian Coughlin read excerpts from Plato's Republic in which Socrates described the nature of tyranny and how it can arise even in a functioning democracy. Benjamin Gerber tied those ancient words together with lessons from the ancient Jewish tradition. We ended with a minute of silence for the victims of attacks in Charlottesville and for the countless other current victims of similar acts around the world.

LLamas and sheep and fleamarket and café near Uddevalla

We're dedicated to political organizing, getting Americans abroad to vote and to influence our government. But we also believe in having a good time and building community.

DA member Jeff Cabot lives on a farm in Utby near Uddevalla where two of his daughters -- Emily and Alexandra -- run a wonderful fleamarket & café (Systrarnas Loppis & Café). Seven of us visited for a special tour on Sunday 23 July.

The large barn and several nearby sheds are stuffed with fascinating fleamarket goods. The café serving wonderful homemade pastries -- Alexandra is a trained baker -- is also in the barn amidst fleamarket splendor.

Outside we picnicked and wandered among the flowers and the  llamas, sheep, rabbits, chickens, the pot-bellied pig Ingemar, the (Democratic) donkey Ior, and more.

We had a wonderful time connecting again with Jeff -- whom we met last year at our Voting Center in Uddevalla during our Global Presidential Primary Election (between Hillary Clinton and Bernie Sanders) -- and meeting his lovely wife Yvonne and charming daughters.

We look forward eagerly to our next visit. Thanks Jeff and family! (and thanks to Carry for renting a van for us!)

We Marched in WestPride's Rainbow Parade!

Thanks Steffanie Rowland for the picture.

We had an ideal spot for visibility and attracted LOTS of attention, smiles and applause, and lots of photographs including many who seemed to zoom in on the No Trump - DA-Western Sweden sticker below the star!

Thanks Joe Haslem for the picture.

Marching in the Pride Parade!

DA-Western Sweden will be participating in West Pride's Rainbow Parade this Saturday, gathering in the Opera parking lot at 2 pm, then marching at 3 pm up to Götaplatsen. We've marched in these parades several times before (see photo of a previous year's participation). Come help us make a splash and connect with more Americans! Wear bright clothes if possible!

We had a lovely discussion among a small group (5) at AfterWork today, covering everything under the sun, and finally even politics at the end!

Coming up we've got the Pride Parade (West Pride) on Saturday June 10 -- more on our participation plans soon!

And there will be a "Call Storm" on June 15 -- tax deadline for those of us abroad -- focused on our demand for Residence Based Taxation (as opposed to the current Citizenship Based Taxation) so that we abroad will no longer need to file.

And even before that is this! From the DNC:

Resistance Summer 2017. This summer, we're investing in all 50 states and connecting with every single voter in real life on the issues that matter to them -- from health care to education to jobs and economic opportunity. Thanks to you, this movement will be a force to elect Democrats in communities all across the country from city council to Congress.

Now, we need your help to start Resistance Summer off right with house parties across the country on Saturday, June 3rd at 4:30 p.m. EDT, featuring a kickoff livestream with Keith Ellison and some surprise guests! Can you sign up to host a kickoff event in your neighborhood?

All you'll need is a laptop or tablet to join the live event with Keith and our special guests, and to be willing to host some grassroots Democrats from your neighborhood! We'll make sure you have everything else you need to start organizing in your community.