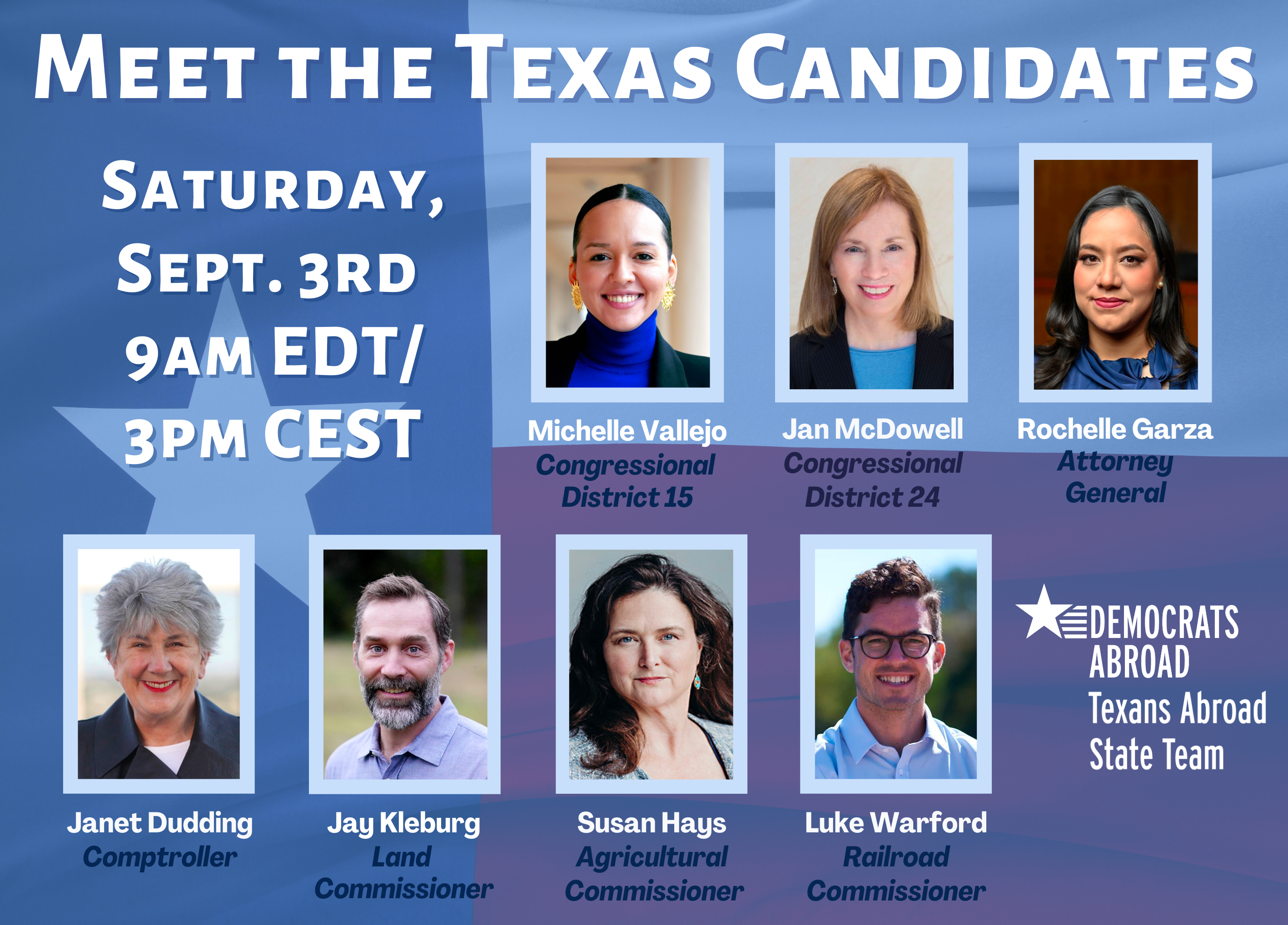 Join Texans Abroad on September 3rd at 8am Central/9am Eastern/3pm CEST as we welcome the phenomenal slate of statewide candidates running to help secure the future of our great state.

Texans Abroad presents the 2022 State Democratic Candidates Forum. With Labor Day just around the corner, the 2022 midterm campaigns are shifting into high gear. Our candidates in Texas are fighting to win statewide races that Democrats haven’t won in a generation. Our Congressional candidates are fighting to win in gerrymandered districts. They are stepping up and speaking out against entrenched one-party rule.

Find out their positions on our voting rights, and their plans to reshape our state’s future. Our respected guests include:

Rochelle Garza for Texas Attorney General - The chief legal counsel of Texas serves all state agencies and boards, and represents the state in civil litigation. Rochelle Garza is running to defeat incumbent Ken Paxton (R, ), who has been under felony indictment for securities fraud since 2015.

Janet Dudding for Comptroller - The Comptroller is the state’s chief tax collector, accountant, revenue estimator, and treasurer. Janet Dudding, a CPA who started her career in the State Auditor, is running to defeat incumbent Glenn Hegar, who killed appraisal reform that would have lowered property taxes.

Michelle Vallejo for Congressional District 15 - CD15 was gerrymandered to make a safely Democratic district into one of the most competitive races in the country. Michelle was recruited to run for Congress by LUPE Votes, a community organization that uses grassroots organizing to push for the interests of underrepresented and neglected people. Michelle is a passionate advocate for uplifting working-class Americans and not corporate interests. Her run for Congress is to help build stronger and healthier communities so that people of all backgrounds can thrive in South Texas.

Jan McDowell for Congressional District 24 - CD24 was also heavily gerrymandered in 2021 with the goal of keeping GOP incumbents in office, and avoiding a fair election process. Jan is running against the incumbent Beth Van Duyne, a proud member of the staunchly 'Conservative Squad'. Jan is a CPA with the understanding to study and analyze the financial issues that are so important to the responsible conduct of our government. She will need our votes from abroad to oust Van Duyne and represent our democratic values in Washington.