Medicare - What You Need to Know 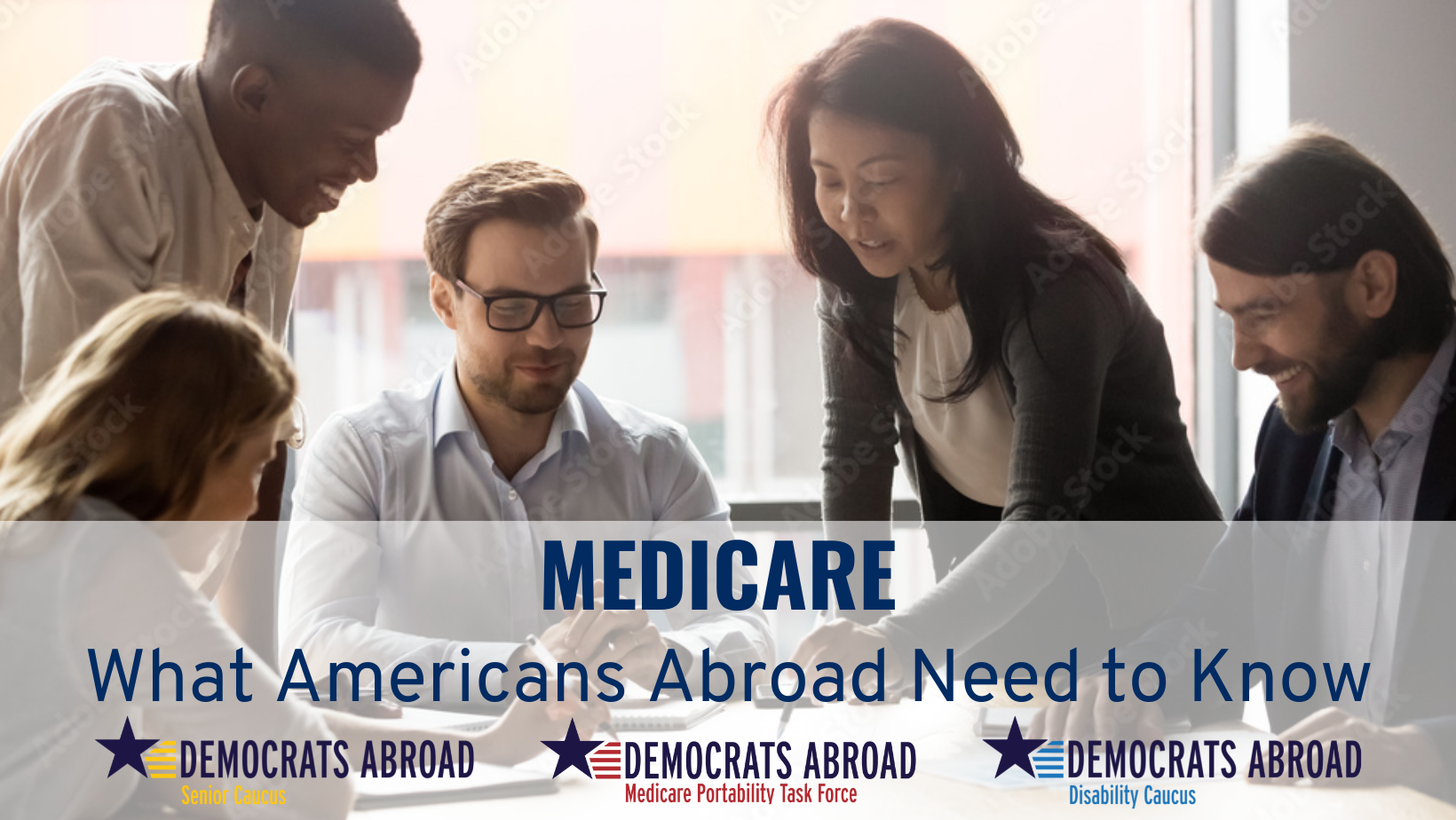 Join us on February 19th for a practical explanation of what Medicare is, how it is funded, to whom it is available and the nature of coverage it does or can include.  Find out what kind of decisions you will have to make – either now or in the future – and how these decisions and programs can significantly impact your future financial and insurance coverage situation.  These decisions are important for people with disabilities and seniors, but knowing what is coming is important for all Americans overseas – whether you plan to stay abroad or move back to the US.

Our panelists are Democrats Abroad members and Americans living abroad who are working on legislation to better the opportunities of Americans abroad and who will share their knowledge, experience and plans for the future with you. Please note that this panel will give neither financial advice nor expert opinion on individual situations.  The webinar will be recorded, and all the documents presented in this webinar will be sent to anyone who RSVPS for the event. 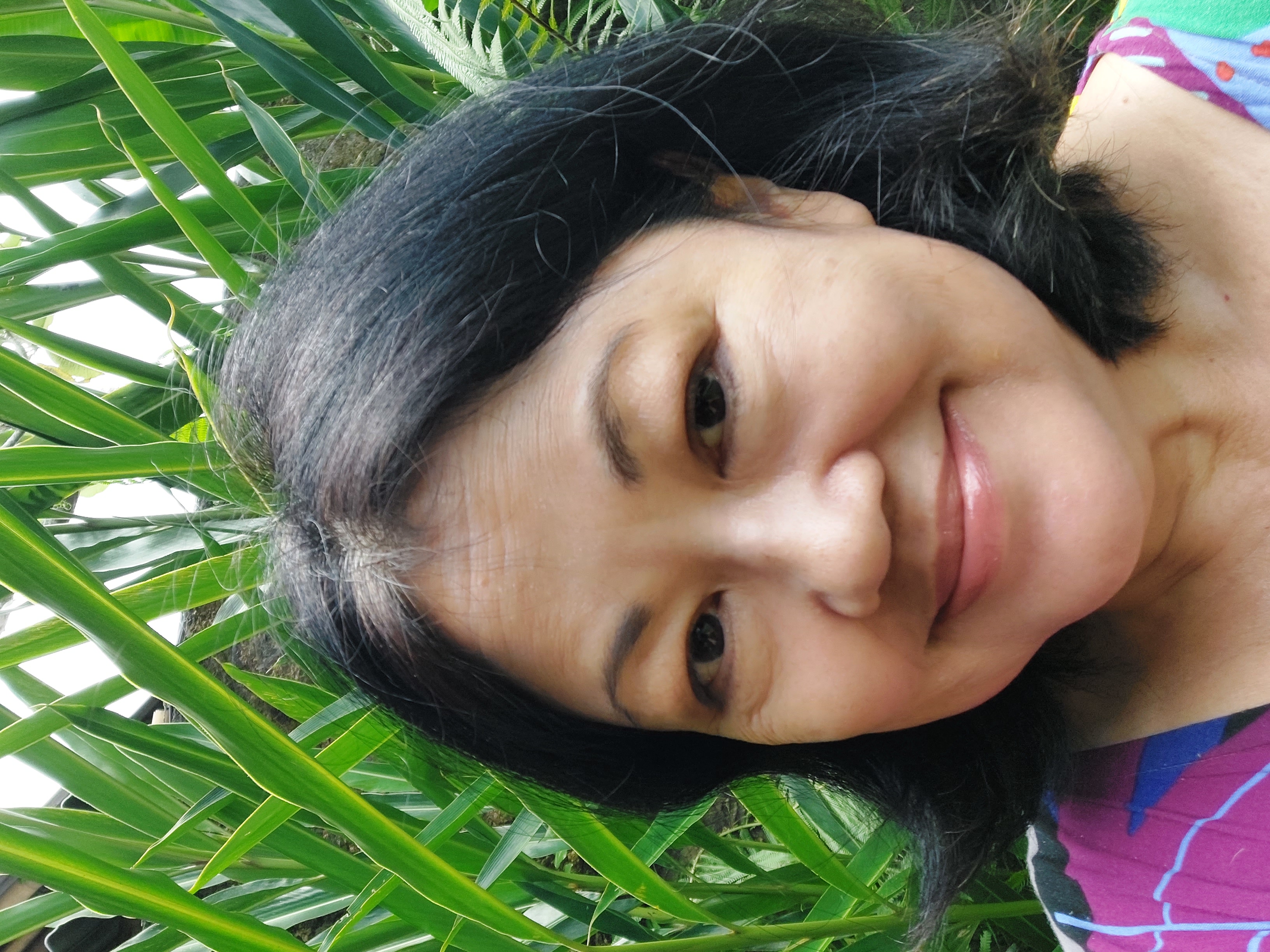 I’m thrilled to join such an enthusiastic and hard-working group at AAPI Caucus. There are so many issues facing us as part of the hugely diverse but “silent minority” but together we are up to the challenge.

I was born and raised in Hawaii, of second or 3rd generation parents who originally immigrated to the US from Japan and China. In 1996, I moved to the fascinating archipelago of Indonesia.

When Hawaiian-born Barack Obama ran for President, I joined Democrats Abroad Indonesia to volunteer for his campaign, and have remained active or semi active since that time.

Some of the issues that I am particularly interested in are GOTV, voting rights, and expanding DA membership and awareness. Other areas I’m passionate about are the participation and images of Asians in the media, and stereotyping of art and traditional cultures.

January News: Give Us Your Feedback - What Should We Do in 2023?

Give Us Your Feedback - Take Our Membership Survey

Remembering the Legacy of the Japanese American Incarceration

On February 15, 2022 the Senate unanimously passed legislation authorizing the Amache National Historic Site in Colorado to become part of the National Park System "to preserve, protect, and interpret for the benefit of present and future generations resources associated with the incarceration of civilians of Japanese ancestry during World War II at Amache, also known as the Granada Relocation Center, and the military service of incarcerees from the Amache Center." Read the complete bill here.

Senator Michael Bennet, one of the co-sponsors of the bill in the Senate stated, "The incarceration of Japanese Americans during World War II at sites like Amache is a shameful part of our country’s history. Our bill will preserve Amache’s story to ensure future generations can learn from this dark chapter in our history."

First thing we want people to know is that solidarity is there. 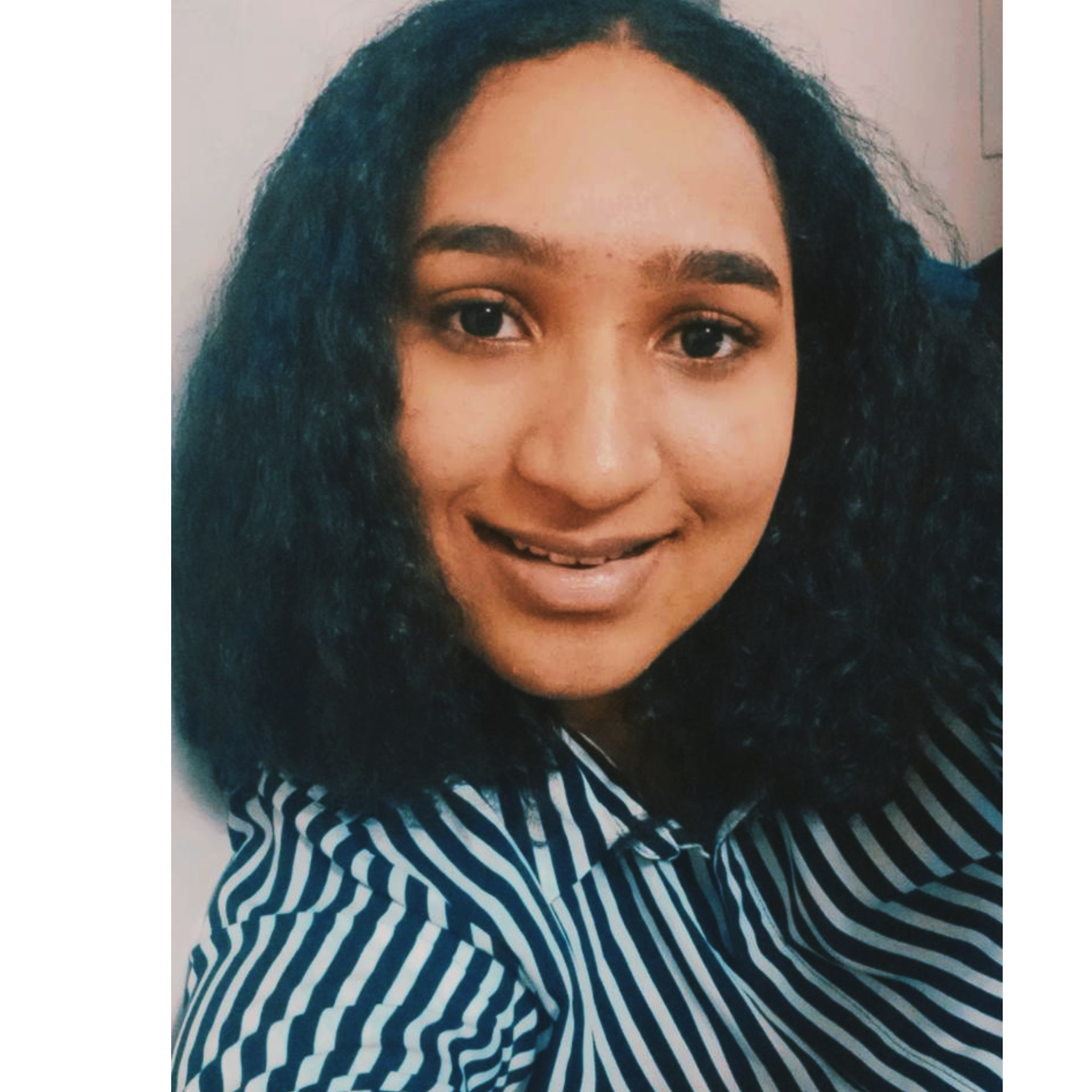 Sruthi Venkatraman lives in Bangalore, India and votes in Washington. Inspired by The West Wing like many others, she took the plunge into the world of U.S. Politics from abroad last year and joined Democrats Abroad. As a member of the Events Working Group of the Global AAPI Caucus, she looks forward to exploring and representing the AAPI community's heritage and diversity.

Currently, she studies at the Symbiosis School for Liberal Arts and hopes to one day work in policy reform. She is passionate about minority rights, healthcare and climate change. When she’s not studying for her degree, Sruthi enjoys drinking copious amounts of coffee, debating and reading books. 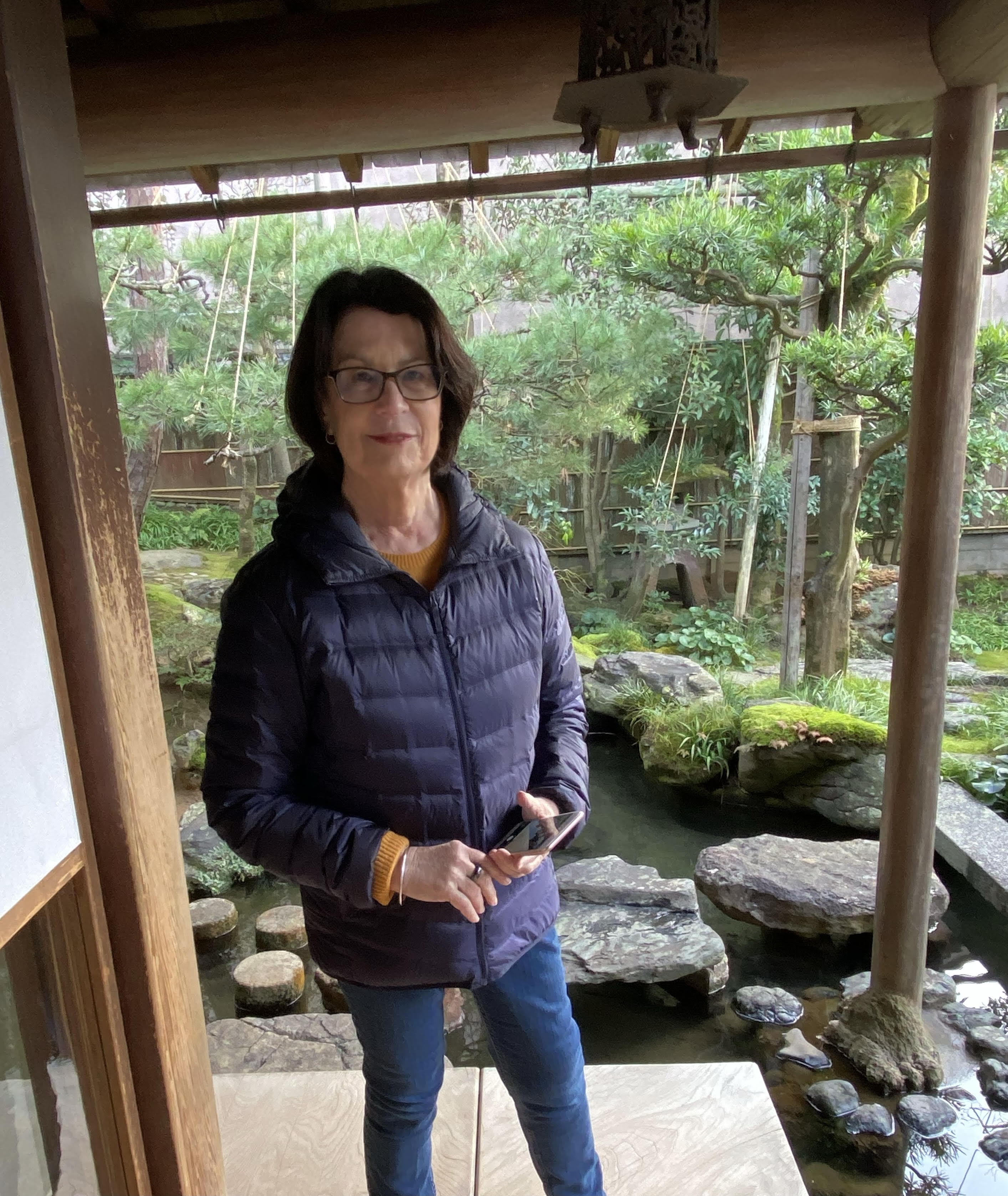 Greetings from Perth, Western Australia on the coast of the Indian Ocean.

I have been a member of Democrats Abroad since moving to Perth nearly 28 years ago from Santa Barbara, California. While I am not Asian-America, my husband is from Kyoto and my two children are proudly Japanese-American.

The election of President Biden and Vice-President Harris is just the beginning of a very long way to go with much work to be done on a number of fronts. The surge in Asian hate crimes in the US, as well as increased racism abroad, was the motivating force for me to join the AAPI Caucus.

I have always been committed to social equity and justice. I have recently retired after a long career in higher education, both in the US and Australia, including involvement with diversity and inclusion. I look forward to assisting the AAPI Caucus both globally and in Australia. 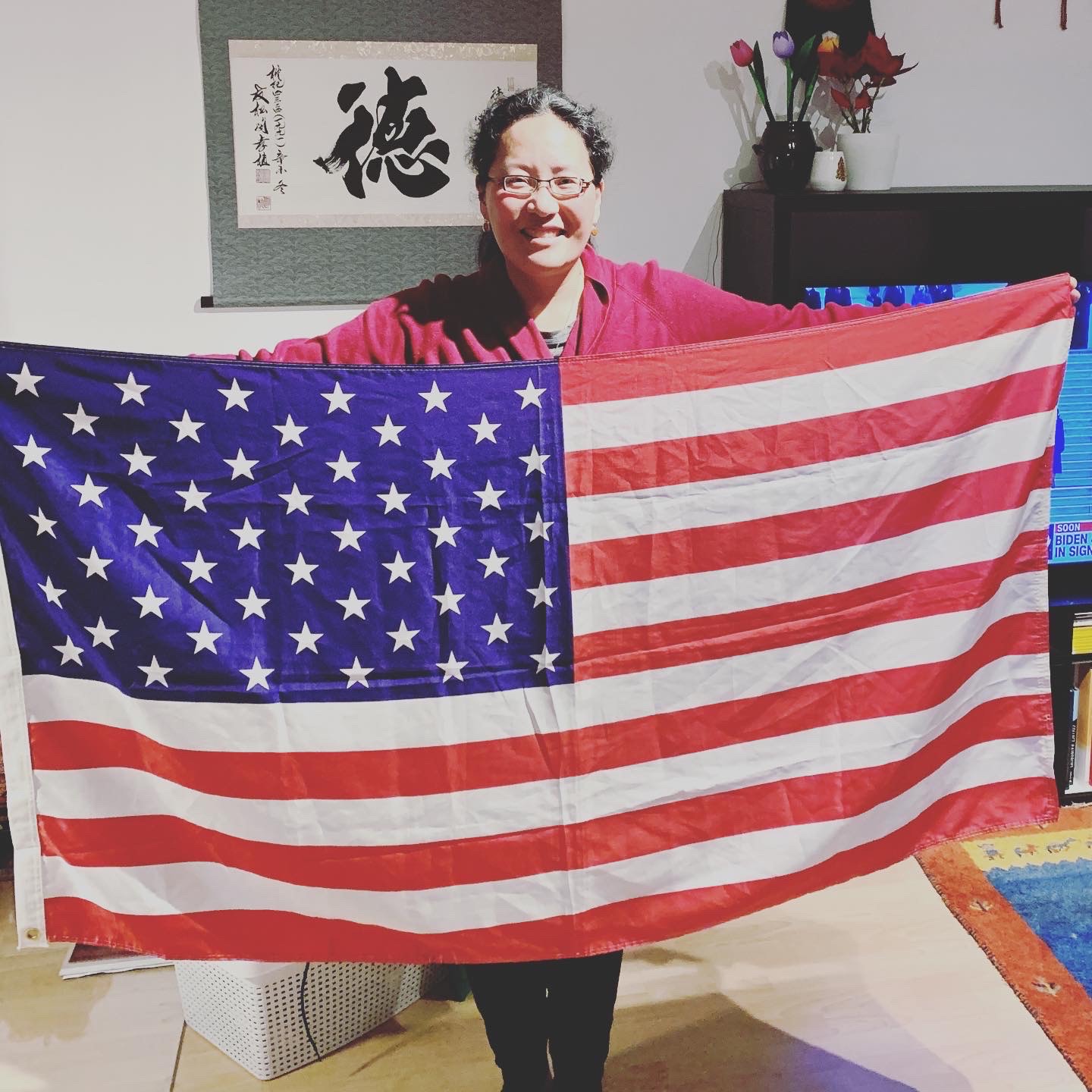 Hi everyone! Greetings from Nürnberg, Germany.

I decided to volunteer for Democrats Abroad Germany AAPI Caucus because it is personal and important to me. As a naturalized Korean American from Wisconsin, I want to raise awareness of the challenges and issues that the AAPI community faces every day. Since I moved to Germany in 2019, I felt disconnected and isolated from American politics. So I joined Democrats Abroad north and central Bavaria Chapter. In March 2021, after the horrific shootings in Atlanta, I felt numb, sad and worried for my family. The terrible and racist incidents were too much! So I decided that I had to do something to fight for justice especially for our AAPI community.

In the US I also experienced discrimination and microaggressions. It was frustrating and exhausting to deal with stereotypes and prejudices.
My teenagers also experienced uncomfortable situations and questions about their Asian background, not only in the US but also in Germany since they are half Korean American and half German. Wherever we are, we still face similar questions and experiences. I am doing this work for them as well.

I am also proud to be Korean American and teach about Korean culture through cooking and traditional drumming. I will continue to do this work in my new community in Germany.

Along with other communities that are facing challenges, I hope that our caucus will bring much needed awareness of AAPI issues and offer support for each other. Along with educational and social programs, we hope to reach out to AAPI in Germany and build connections. Feel free to reach out to me!