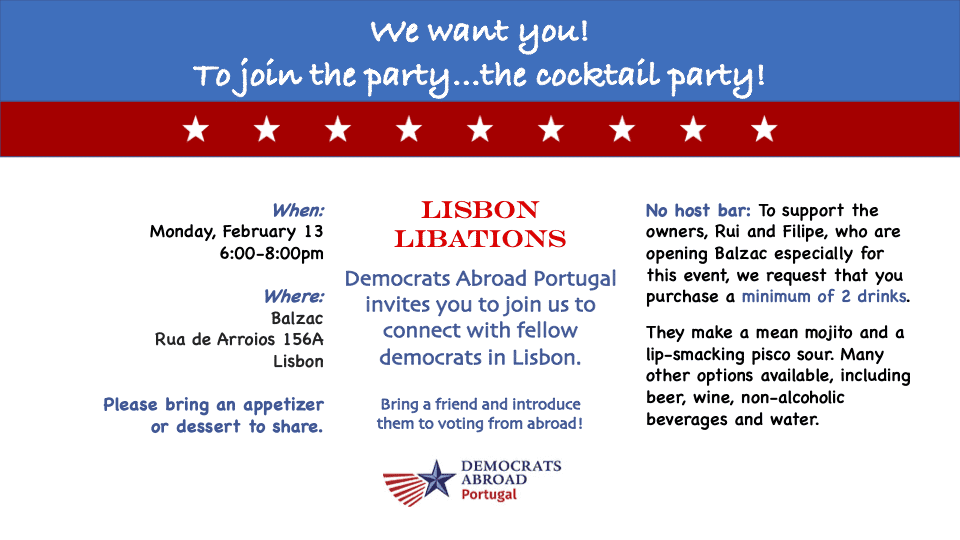 Please join us for the first Democrats Abroad social event in Lisbon in 2023!

We are gathering at Balzac - a wonderful cocktail bar. Please bring an appetizer or dessert to share and connect with fellow Democrats in Lisbon. To support the owners, Rui and Filipe, who are opening for us, we request that you purchase a minimum of 2 drinks (nonalcoholic options available). We look forward to seeing you! 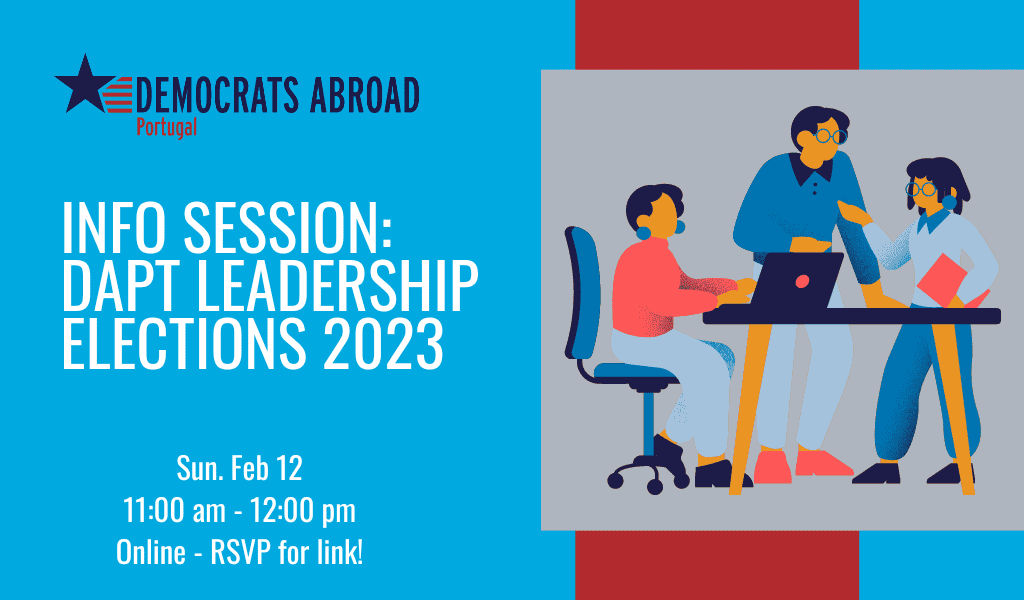 The DAPT Nominations and Elections Committee is kicking off the 2023 DAPT leadership elections process. Our leadership team is an engaged, dynamic, fun group who coordinates the many volunteers who help register voters, ensure Americans in Portugal vote in the US, and organize events.

Interested in learning more about leading DAPT? Join us for a Sunday morning chat (bring your cup of coffee or tea!). The DAPT Nominations and Elections Committee will be hosting an online Information Session on February 12 at 11:00 am WET, so you can ask questions about becoming a candidate, nominating a member, and voting.

In the Democrats Abroad Portugal leadership election, our members will elect multiple positions, including: Chair, Vice-Chair, Secretary, Treasurer, Counsel, several At-Large Executive Committee Members, 1 DPCA Voting Representative, and 1 Alternate DPCA Voting Representative. The elections will take place in March and the results will be announced at our Annual General Meeting on March 22 at 7 pm.

WHEN
February 12, 2023 at 11:00am
WHERE
ONLINE
Lisbon
Portugal
Google map and directions
24 rsvps
rsvp

Kristi Holmes Espineira's Democratic Party roots cross generations. Growing up, both her parents were professional educators with a strong commitment to working in economically disadvantaged communities with the long term goal of improving American diversity. Throughout the 60s, her mom helped to transition recently integrated schools; her dad worked directly for the Colorado River Indian Reservation in Arizona. Kristi's parents did not regard their work as "political party activism," per se. Rather, their goal was simply and literally to "do what was right." The intrinsic importance of diversity and equality was regularly the focus of dinner table conversations. Kristi's mom remains both socially and politically active today. Among Kristi's favorite "mom" memories is attending together a Barack Obama rally in 2012 and marching together in the Women's March in 2017.

“The Brink” Film Screening Draws Democrats in Lisbon and Porto

The documentary film "The Brink" had its Portugal premiere in Lisbon on October 24, as part of the doclisboa film festival. Over 40 Democrats Abroad members attended the premier to view the film, in which award-winning filmmaker Alison Klayman takes on former White House chief strategist Steve Bannon, following him for over a year as he tries to promote his brand of extreme nationalism and unite the far-right anti-immigrant parties of Europe.