The secret on the fourth floor: Concerning the Jewish family who shared a house with the American ambassador to Berlin 1933-1937 (with John Panofsky)

The time is August 1933, the place Berlin, where a Jewish family sought diplomatic protection by renting out most of their home on Tiergartenstrasse as the official residence of the American ambassador and his family. How the pivotal  years of 1933-34 unfold from the perspective of U.S.ambassador William E. Dodd and his daughter Martha Dodd is the subject of Erik Larson's best selling book In the Garden of Beasts: Love, Terror and an American Family in Hitler's Berlin.

The  ambassador's Jewish landlords were the Panofsky family. Their grandson John Panofsky will give an overview of Larson's book but also take you behind the scenes, filling in biographical details about the Panofskys and their relationship with the Dodds.

John Panofsky is a second generation survivor. He was recently appointed as a tenured judge in the Administrative Court of Göteborg. 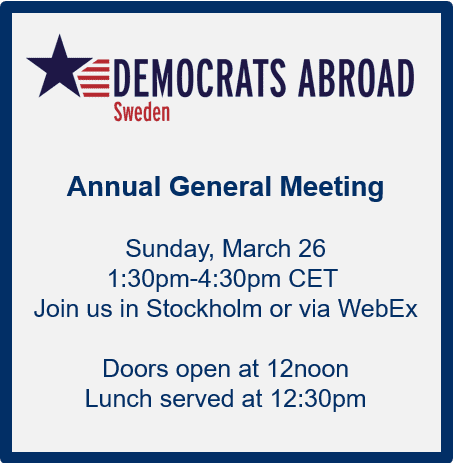 Democrats Abroad Sweden will have its (hybrid) annual general meeting on Sunday, March 26, 2023 from 1:30pm-4:30pm on WebEx and in-person in Stockholm.

Please RSVP for the link and location! When you RSVP, you will be directed to a Google form where you can tell us whether you will join us in-person or online.

Last November, we helped Democrats keep the Senate and held back a "red wave." Big thanks to all of our volunteers for getting out the vote and to our members for casting their ballots from overseas!!

We have a lot of work to do ahead of the presidential elections in 2024. At our annual general meeting, we'll lay some groundwork and make plans to grow our vibrant and active country committee. If you are new to Democrats Abroad or want to get more involved, this is the perfect opportunity to learn about our organization, what we do, and plan for the future!

For the day's schedule and meeting agenda, visit our news page.

In the days leading up to the meeting, we will be electing DA Sweden's Executive Committee. More communications on this will be coming from our nominations and elections committee.

Attending in person? Join us for lunch! Doors open at noon, and lunch starts at 12:30pm. We'll be ordering tacos and are asking for a 150kr donation toward the cost.

Please also consider donating to help offset the costs for our venue and refreshments and to generally support the organization. Or become a sustaining member!! -- Monthly donations help us plan future events.

It is time to elect a member-at-large to the Executive Committee, to complete the 2021-2023 term of Beth Landry, who stepped down to become the DA Global Secretary. This is the only position we will be voting on. The two members-at-large on the Executive Committee have voting rights at the global DA level, along with the country chair and vice chair. All persons on the executive committee serve on a purely volunteer basis for a two-year term.

Are you or someone you know interested in being a part of our leadership team in Sweden? Are you ready to represent Democrats Abroad Sweden on a global level with your voice and your vote? This is your chance.

Thanks to our talented and dedicated team, Democrats Abroad Sweden consistently performs among the top DA countries. You’ll be a key part of our efforts here in Sweden and can get involved in shaping Democratic politics at the global level. Being a member of this leadership team is incredibly rewarding; you’ll be part of a vibrant, inclusive, global community of Democrats. The time commitment is relatively minimal (a couple hours per month) and the role largely -- voting rights aside -- what you make of it.

The annual general meeting will be held in Stockholm on Saturday, 5 February, an announcement about which will go out soon. The election of the member at large will be conducted via electronic vote before the meeting, and the results will be announced at the meeting.

All nominations must be submitted at the latest by midnight on Saturday, 1 January 2022 (35 days before the election). Send nominations by email to [email protected].

Nominations must include the following:

After candidates are announced, they will have the opportunity to present themselves via a short video message and also at a digital meet-the-candidates forum on Wednesday, 12 January.

Trump Does Not Determine What America Stands For

This is an English-language version of an op-ed article originally published in Swedish on etc.se. To read the original, click here.

There may be nothing more American than the debate about what the United States stands for. The country has had its share of flaws, while also continuing on a remarkable path of long-term progress. That progress has often been a struggle and suffered deep setbacks, like those we are experiencing just a month into the Trump administration. But we have regrouped and begun to organize to defend liberal democracy and our values.

The setbacks remind us that progress is not inevitable, and does not just happen naturally. Instead, progress is actively built by involved citizens, both by those in the United States and also by the millions of Americans who live abroad, many of them here in Sweden.

At the ballot box, through civil society, and by organizing politically, Americans are engaged in what President Barack Obama called the “hard and frustrating and necessary work of self-government”. Since Donald Trump’s election victory, in which he lost the popular vote by more than 2.8 million votes, we have seen the sheer power of what happens when the American civil society kicks into action to protect liberal democracy.

Organizations dedicated to protecting civil rights in the United States like the American Civil Liberties Union have raised unprecedented funds, while millions have demonstrated for what they believe in, and become engaged in the political process. Democrats Abroad, the official overseas arm of the Democratic Party, has signed up thousands of new members and volunteers, including here in Sweden. 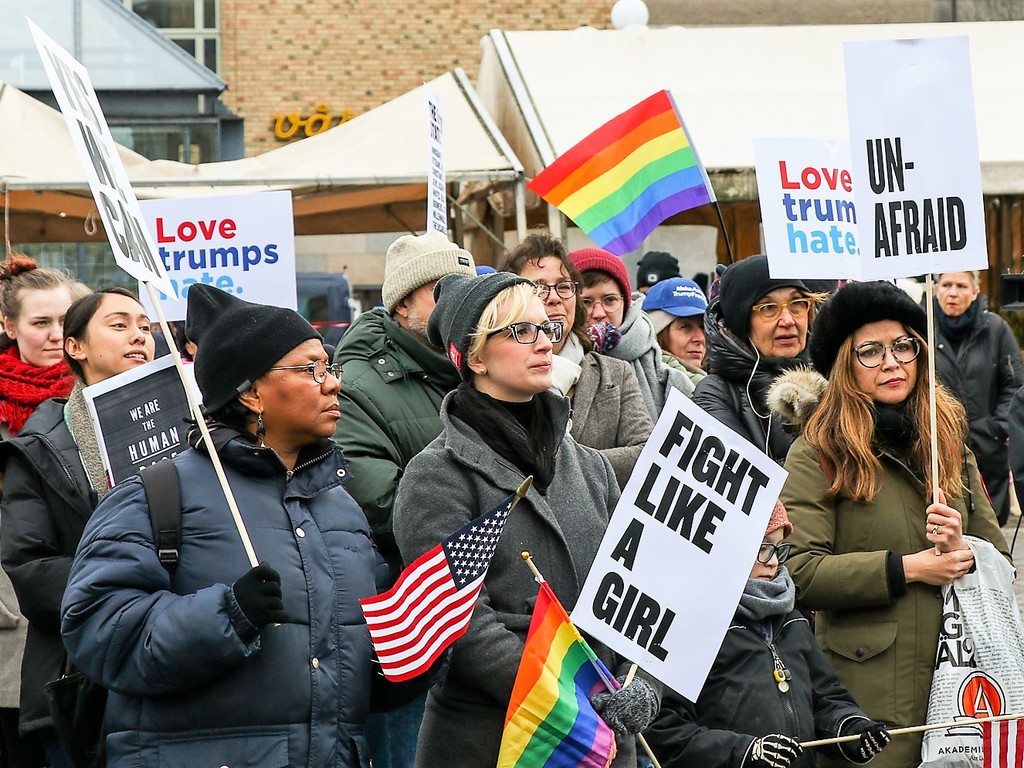 Trump’s ban on travel from a number of Muslim majority countries is unconstitutional and contrary to international law. Because it was originally conceived as a ban on all people of one of the world’s major religions, it is also deeply un-American. Even though it has now been halted by the courts, the Trump administration continues to defend it on the spurious grounds that it will keep the country safe. Now he has announced that he wants to deport millions of migrants, even those who have already become an integral part of American society.

We refuse to simply accept that. On the day after Trump’s inauguration, more than 150 members of Democrats Abroad demonstrated on Medborgarplatsen in Stockholm. When the travel ban was announced, many Americans in Sweden sprang into action. Democrats Abroad volunteers lined up to say they were ready to help those affected, and others went to work organizing legal support, lighting up the phone lines of their elected representatives, and recruiting friends and family to find ways to fight back. Similar stories have poured in from around the world.

That is how Donald Trump’s vision of America will be resisted. But the way we will turn the country toward progress again is through the electoral process, beginning with the midterm elections in 2018. That is why right now Democrats Abroad is organizing citizens and dual-citizens who live in Sweden to help them register to vote, get engaged with the political process, and shape the future of the Democratic Party.

Trump does not determine what America stands for. We will continue to fight for an America that is open, tolerant, and just. Nothing is more American than that.

Posted on News by Jeffrey Cheng · January 15, 2017 7:57 AM
For members who want to join the Democrats Abroad Sweden Annual General Meeting:
The survey has been concluded and the AGM will be held on March 25, 2017 in Stockholm, Sweden.
Thank you for helping decide the venue city and date. Please keep an eye on your email for event rsvp information.
If you are not already a member, or you have deleted your membership, you can join at www.democratsabroad.org/join