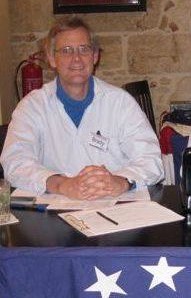 In a special election, completed on January 8, Brady Kiesling became Democrats Abroad Greece (DAGR) Vice Chair with 80 percent of the ballots.  Following the death of country Chair Steve Medeiros, on November 7th, as per the DAGR Constitution, the Vice Chair, Stacey Harris-Papaioannou, succeeded Medeiros as Chair.  A Special Election was run from December 18th through to January 7th.  Brady Kiesling and George Malamo were the candidates. Electronic ballots and mail-in ballots could be cast.  The Election committee -- comprising Nikki Fellouris, chair, and committee members Anna Haughton and Sarajane Kidd Leone -- announced the results at an online Webex meeting on Wednesday, January 8th.

Brady was a featured speaker at the EMEA Regional Democrats Abroad conference held in Athens this past October. He has been active in mobilizing the American community in Athens in support of Democratic candidates since 2004. During the 2008 elections, he maintained the DA membership database. From 2010 to 2013, he served DAGR as Secretary.  He has volunteered for a variety of DA programs and events including phone banking, Study Abroad outreach, data base upkeep and nominations-elections committee.

Brady first came to Greece in 1979 when he studied at the American School of Classical studies. He is currently working on a free app,Topos Text, that accesses Greek classics and archaeology.  Kiesling is a writer and researcher based in Athens.