Bridging the Distance for Democracy

The DA Global Seniors Caucus was established in January 2022. Since that time, the GSC has been working on a variety of issues which affect Seniors such as Windfall Elimination Provision, Medicare Part B, Medicare Portability and tax reform. The purpose of this webinar is to discuss how we have worked closely with the US Senior Councils during the election cycle and how we can broaden this collaboration with other State committees and Senior Councils in the coming months and years.

The guest speakers will be from both Stateside and Democrats Abroad. They will discuss what collaboration means for them and how we can build this collaboration further across both sides of the Atlantic. In the end, we want to form a collaborative community where we can work with all seniors who are members of the Democratic party. We are able then to help each other to better understand the issues and concerns affecting Seniors, thereby building a powerful forum for making our voices heard in Washington DC. We believe this year our collaboration empowered and encouraged Seniors to exercise their voting rights.

RSVP BELOW TO JOIN US ON ZOOM! 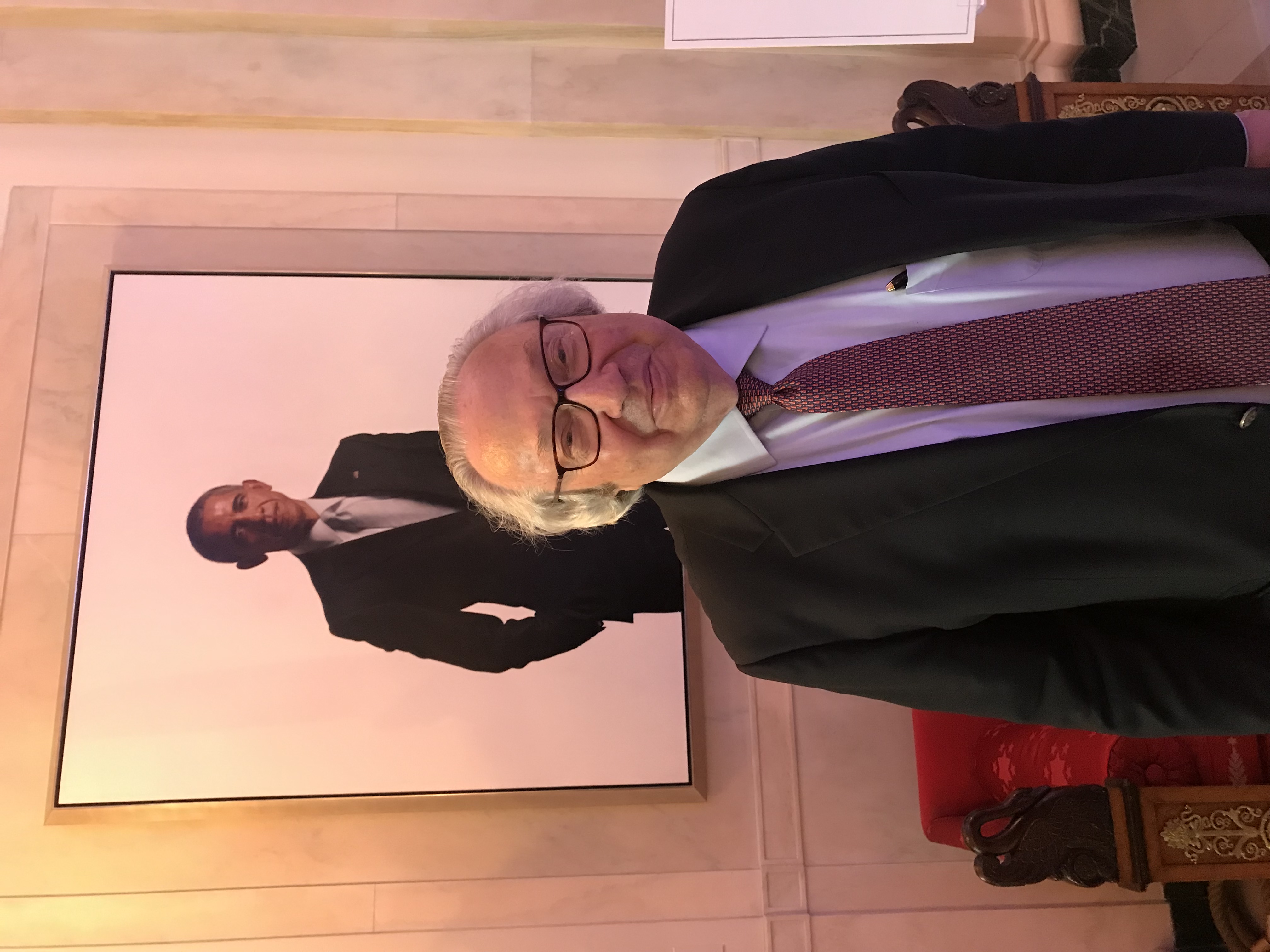 Steve Regenstreif, Chair, DNC Seniors Council: In 2013, Steve Regenstreif retired as Director of the Retiree Department of the American Federation of State, County and Municipal Employees (AFSCME). This is the largest organization of public sector retirees in America. Since 1983, while Steve was Director, the membership grew from 18,000 dues paying members to 250,000 retirees in 250 state and local groups. During his tenure as Director, he served on the boards of the Leadership Council of Aging Organizations and the Alliance for Retired Americans. He was also a delegate to the 1995, 2005 and 2015 White House Conferences on Aging, the 1998 White House Conference on Social Security  and the 2006 National Summit on Retirement Savings. In  October 2017, he was re-elected to a third term as Chair of the National Democratic Seniors Coordinating Council. As a result of holding this position, he is a member of the Democratic National Committee

Jon “Bowzer” Bauman, Vice Chair DNC Seniors Council;
President of Social Security Works PAC and a member of the singing group Sha Na Na.  Jon “Bowzer” Bauman is President of Social Security Works PAC & Vice Chair of the DNC Seniors Council. You still might know him best as “Bowzer,” formerly of the hit TV series and rock group “Sha Na Na” & the movie “Grease.” But since 2004, Jon has participated in hundreds of political campaigns, crisscrossing the country to endorse candidates who will fight for a better quality of life for older Americans. An expert on senior issues, Jon did endorsement events in 35 campaigns in 2022, literally traveling from Washington state to South Florida & New York to Southern California. In 2018, he went into 57 campaigns & in 2020, he did 110 Zoom events as a surrogate for the Biden/Harris campaign & in Congressional races. Jon lives in California’s beautiful Santa Ynez Valley with his wife of  51 years, Mary, retired Clinical Director at the HELP Group, one of America’s biggest agencies for educating young people on the autism spectrum. They have two children, Nora, 42 and Eli, 40 & four wonderful grandchildren. 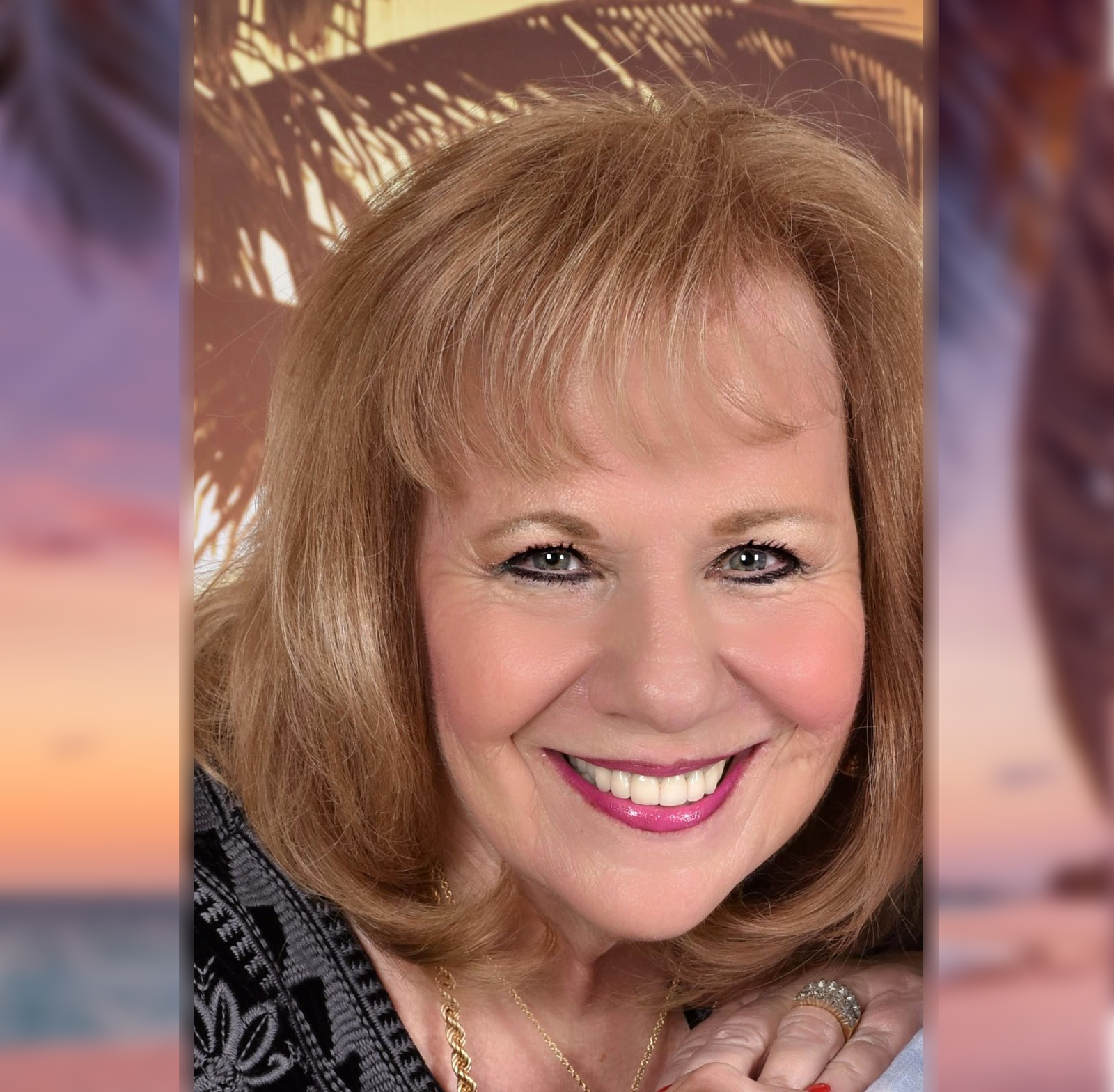 Laurie Plotnick, President, Democratic Party Senior Caucus and President of the Florida Democratic Seniors Organizing Council: Laurie Plotnick, a Brooklyn native has lived in Parkland Florida for 21 years. Prior to her move, Laurie was an educator for 33 years in the New York City Public School System. Her teaching career included being a UFT Chapter Leader and Delegate. After receiving 2 Masters’ Degrees, Laurie became a School Administrator and District Administrator for Special Education. Upon her relocation to Florida, Laurie was a charter school Principal for 2 years. She quickly realized that she was a public-school educator and left to work for the Florida Legislature. Laurie worked for 16 years as a Chief of Staff for 2 different democratic legislators until her retirement in 2020. It was during those years that Laurie became active in her county’s democratic club. Laurie is still the precinct captain, was the Area Leader and elected officer of her local club. Her participation in the Senior Caucus began when her sister elevated the county caucus and wanted Laurie to assume the presidency due to her illness. The rest is history! Laurie is President of the Broward Democratic Senior Caucus as well as the State Democratic Senior Caucus. Her dedication to electing Democrats state-wide has never wavered. She is married to Shelly, a former New York elected official. They actually met many years ago during an election. They have a daughter Ilene and a wonderful son in law, Michael.

Karen Lee, Member of DA GSC Steering Committee, member of DA Greece, member of Ohio State team: A native Ohio voter and graduate of The Ohio State University, Karen Lee has been a member/volunteer in DA Greece since 2005. At the international level, she was invited to be part of a 5-member team that drafted and conducted the Dems Abroad Grass Roots Organizing Survey and co-presented the findings at the international AGM in Heidelberg (2007). She recruited and managed 90 volunteers for the Obama Inaugural celebration in Athens, 2009. She also attended the regional AGM in Berlin (2010) as part of the delegation to promote DA Greece reinstatement. In 2013, Ms Lee was elected one of two At-Large members of the DA Gereece Excom making initial contacts in view of chapter building in outlying areas. Her academic background in International Studies/Modern Greek Studies, career and volunteer experience in journalism, as well as organizing and consensus building, and a personal interest in Greek traditional dance and culture contribute to her determination in this effort. Elected Chair of DAGR in 2015, Ms Lee served two terms. At the international level, Ms Lee joined the founding steering committee of the Global Black Caucus as a placeholder pending local volunteer (2017) and wrote the Criminal Justice sections of its TOR as well as a follow-up report on Gentrification. She is also a without-portfolio member of Seniors Caucus and ECCC watchdogs. She is currently one of 3 co-leads of the DA Ohio Team, having been tasked this year with recruitment of Ohio candidates for online Meet the Candidates events. 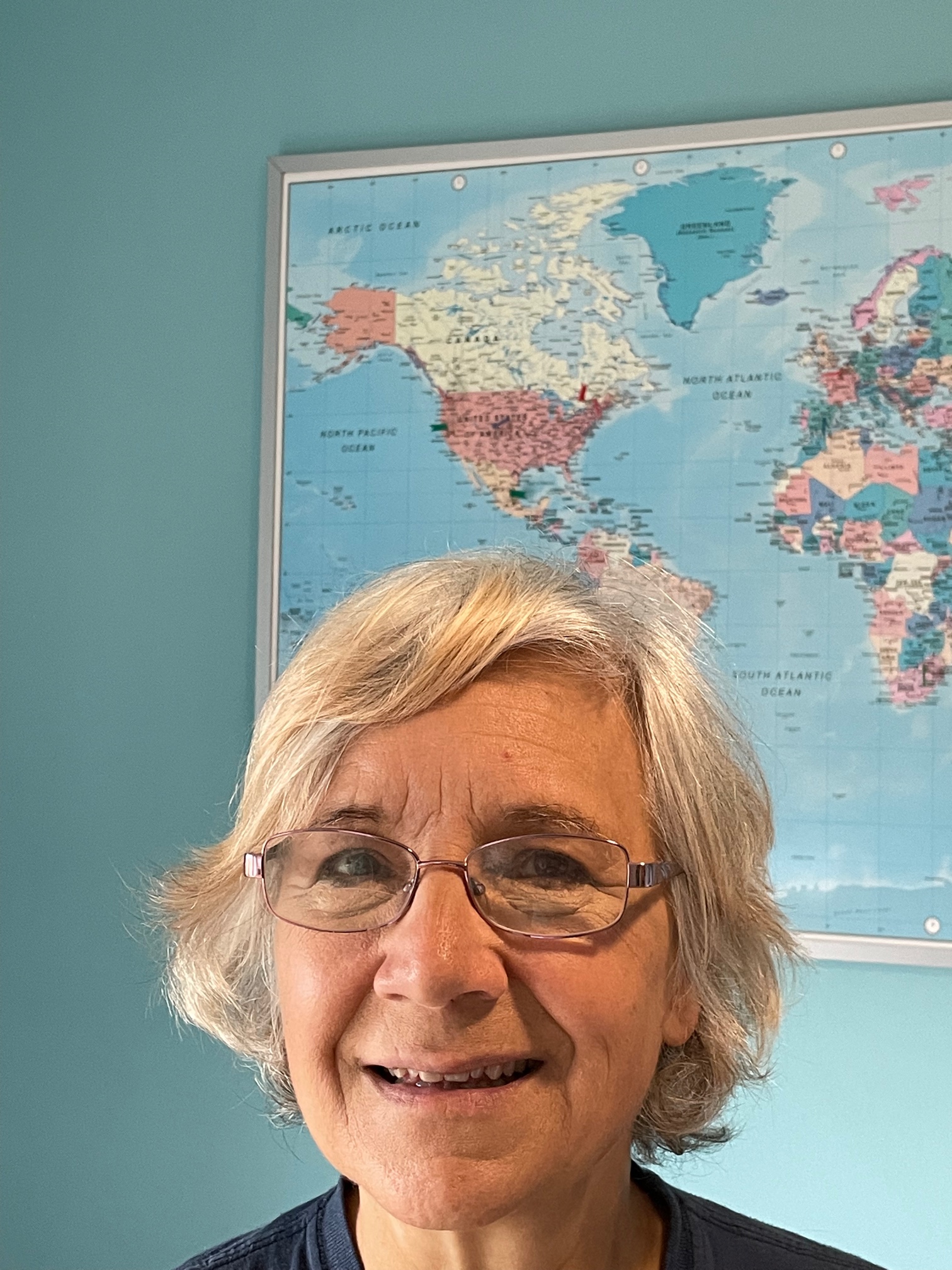 Gina Schwarz: Gina is a 66-year-old American women who has lived in Munich for the past 27 years. Her father grew up in Starnberg and insisted that she speak German at home in the US, so Gina grew up bilingual. Before moving to Germany at age 35, she was a systems analyst at USDA, running the Food Safety Inspection Service’s systems in Washington DC. She followed her heart and moved to Munich for an 18-month contract at Hewlett-Packard, working as a learning products engineer. After her daughter was born, she became a freelance translator/editor to have more flexibility. Her husband left her when she was 59. A year later, fate brought her back together again with the Swedish boyfriend she had when she was 19 and they’ve had a long-distance relationship between Sweden and Germany since then. As a digital nomad working part-time, she can work from anywhere. Munich has been her home for the past 27 years, and she loves the city. With her dog Nera, she enjoys traveling, camping, and sailing, balcony gardening, and work as a volunteer tutor. Gina votes and the issues that concern her are WEP (Windfall Elimination Provision), FATCA, and taxes and bureaucracy in general. 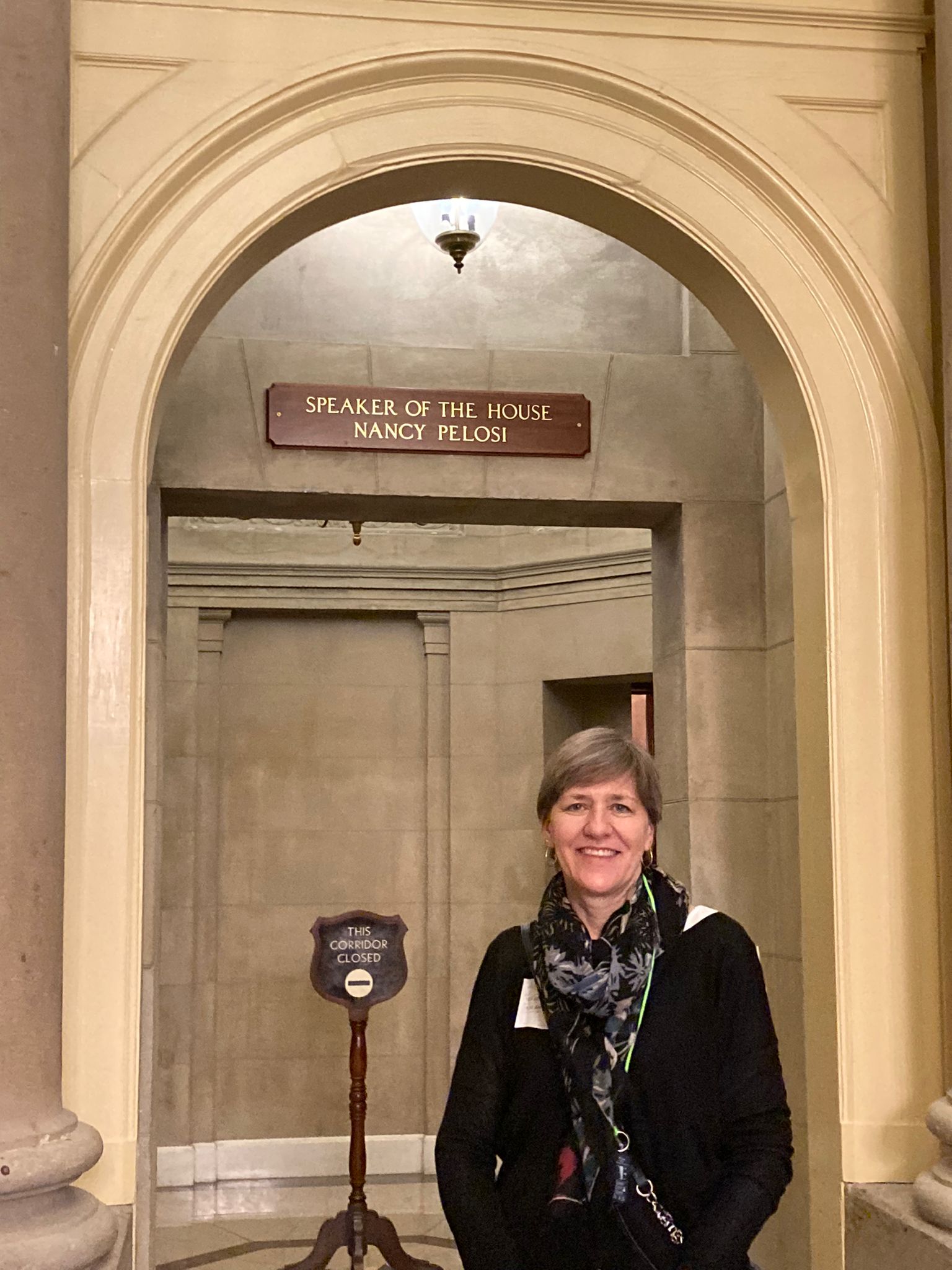 Annie Graul: Annie is secretary of the Democrats Abroad Barcelona chapter and a member of the DA Spain communications team. She is also active in the Wisconsinites Abroad state team, and in that capacity has served as a liaison between Democrats Abroad and the Wisconsin Democratic Seniors Leadership Council.