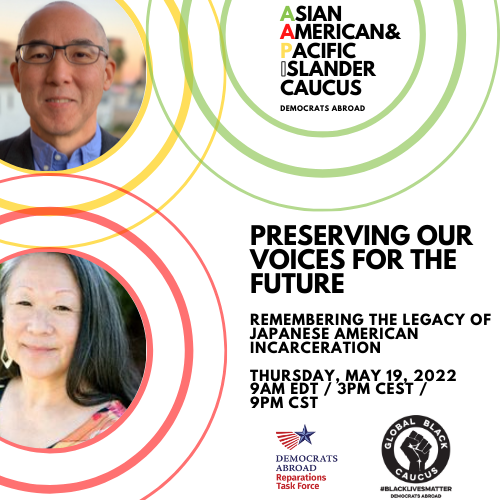 In honor of AAPI Heritage month, Democrats Abroad AAPI Global Caucus, the Global Black Caucus, and the Reparations Task Force will host a discussion about the importance of preserving the legacy of Japanese American incarceration. This event coincides with what would have been the 101st birthday of Japanese American activist Yuri Kochiyama and also the 97th birthday of Malcolm X, who worked closely together in bridging Asian American and Black American civil and human rights. We will dedicate this event to their memory.

Join us as we speak to Brian Niiya, Japanese American Historian and Editor of the Densho Online Encyclopedia, and Grace Shimizu, Director of the Japanese Peruvian Oral History Project and Coordinator of the Campaign for Justice: Redress NOW for Japanese Latin Americans!

2022 is the 80th anniversary of President Roosevelt’s Executive Order 9066, authorizing the forced removal of persons deemed a threat to national security to “relocation” centers. Approximately 122,000 Japanese men, women and children, mostly U.S. citizens, were sent to 10 concentration camps: Heart Mountain in Wyoming, Tule Lake and Manzanar in California, Topaz in Utah, Poston and Gila River in Arizona, Granada in Colorado, Minidoka in Idaho, and Jerome and Rowher in Arkansas.

The Japanese American Education Confinement Act which is currently awaiting passage in the Senate will play an important part in ensuring that the lessons learned from the incarceration of Japanese Americans are taken on board to stem the tide of the abuse of power and cultural intolerance. As we move further away from this period of incarceration and those that lived through this time pass away, it is now more important that we make sure this history is not forgotten. We must learn from our past and the way to do this is by educating ourselves about our history, which includes all sides of our past. This event will explore the importance of preserving Japanese American history as an important part of ensuring that democratic principles are upheld for all people.

Participants will hear from our two guest speakers and will then have the opportunity to ask questions and participate in an informal discussion about how we move forward.

We also want to thank the Global Progressive Caucus for supporting this event.

Brian Niiya is editor of the online Densho Encyclopedia. Densho started in 1996 originally to document oral histories from those incarcerated during WWII and has evolved into a mission to educate, preserve, collaborate and inspire action for equity. Brian’s maternal grandparents from Hawai’i were incarcerated in a camp. He has published widely on Japanese history and has held various positions with the UCLA Asian American Studies Center, the Japanese American National Museum and the Japanese Cultural Center of Hawai’i.

Grace Shimizu is director of the Japanese Peruvian Oral History Project and coordinator of the Campaign for Justice: Redress NOW for Japanese Latin Americans! Her father migrated from Hiroshima to Peru in the 1920s from Hiroshima. He was forcibly brought to the United States during WWII under President Franklin D. Roosevelt’s secret prisoner exchange program. The little-known program aimed to deport those of Japanese ancestry in Latin America and use them as hostages in exchange for Americans held by Japan. After the war, he was not allowed to return to Peru and remained in California. She is one of the founders of the Japanese Peruvian Oral History Project (1991) and the Campaign for Justice (1996).