Americans abroad who still have close ties back to the US often grapple with the distance from “home” — both geographically and by time zones. Just ask Julia Bryan, International Chair of Democrats Abroad.

In 2004, Bryan was a Democrats Abroad volunteer in Prague, helping overseas voters file paper ballots. She went to sleep on November 2, confident that John Kerry was about to make George W. Bush a one-term president. By morning, “we woke up to a loss.”

Four years later, the equation was flipped. A nail-biter of an evening led to a historic sunrise with Barack Obama’s presidential victory. “It was one of the best days of my life,” says Bryan, who a year later would help found the Czech Republic’s first country committee for Democrats Abroad. “I was ecstatic.”

By 2016, Bryan was among hundreds gathered in Prague to watch election results, looking forward to celebrating Clinton’s victory over Donald Trump. In the early morning hours, the mood turned decidedly grim.

Bryan was Democrats Abroad’s International Secretary at the time. When Trump declared victory, she recalls, “My phone started ringing and ringing. Some people were calling just to cry. Others told me they would have voted if they’d known Trump posed a real threat.” 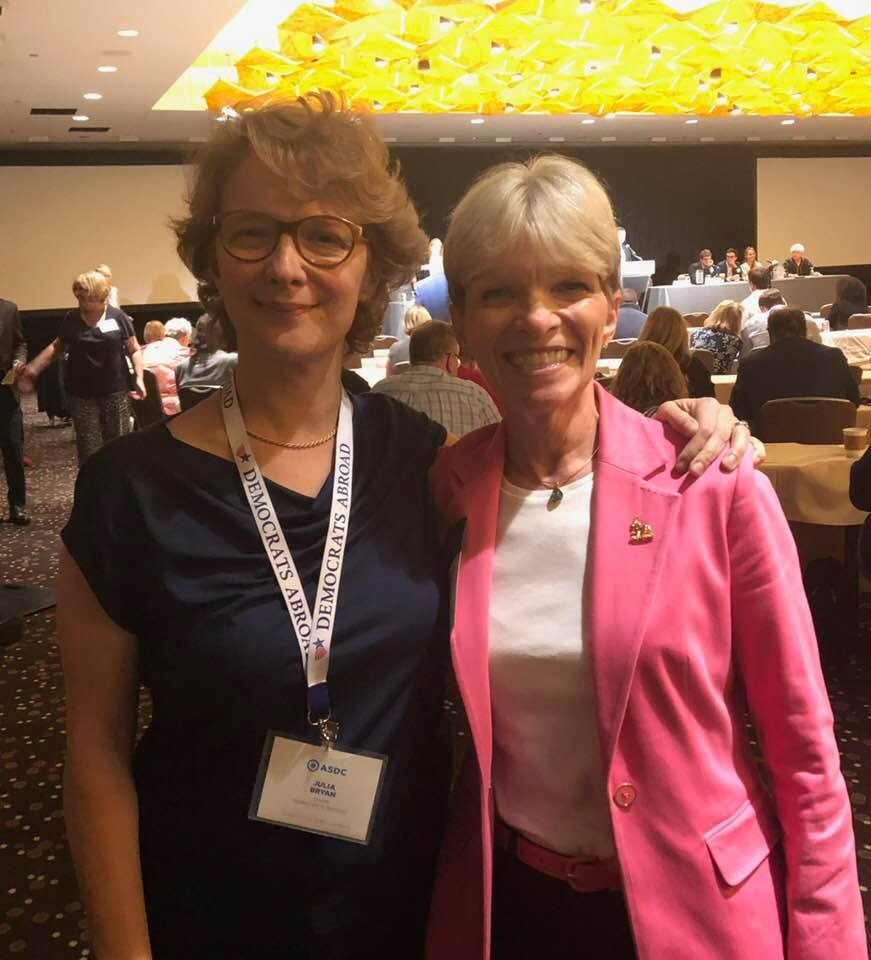 After a few weeks of depression and determination to protect America’s institutions against Trumpian caprice, determination prevailed. By May 2017, Bryan was elected chair of Democrats Abroad, where she now oversees 12 global teams, 45 country committees, and 570 team organizers worldwide. “I spend a lot of time on conference calls,” she says.

As volunteer work goes, the portfolio of Democrats Abroad International Chair is daunting. But Bryan has energy to burn. In addition to raising two children, she owns her own software company, reads voraciously, and determinedly ticks off those 10,000 daily steps on her Fitbit. (Pro tip: Conference calls are good for pacing.)

“Responsibility to others is important to me,” says Bryan, who was raised in a tight-knit Southern Democrat family with a strong commitment to community engagement. Bryan’s parents both taught in an all-black high school; her father, now an attorney, helped start the first integrated law firm in their hometown of Charleston.

Still, politics wasn’t the first thing on her mind when Bryan and her husband moved to Prague. They came over to work for a year. Twenty years later, they have no plans to leave.

“Think how lucky we are to have affordable health care, truly public university level education, and outstanding public transportation,” she says. “When our kids come out of college, they don’t immediately have to buy a car to get to their first job, where their paychecks will go toward paying off their college debt. Instead, they can invest in the community and themselves by working on something transformative.”

Life abroad, Bryan says, is also an opportunity to illustrate to voters in the US that positive solutions exist for some of America’s most pressing challenges. Among her many projects, she is currently organizing a collection of health care stories from Democrats Abroad members as a way of providing Democratic colleagues back home useful stories to share in their debates.

“A lot of Americans in the states are skeptical of solutions like Medicare-for-all,” Bryan says, nodding to the ferociously partisan debate over health care, “But we are the biggest constituency of Americans who have actually experienced this kind of a system, and we know it can work.”

Democrats Abroad delivers more than just data and anecdotes. It also delivers votes — lots of them. Of the roughly 600,000 active American voters abroad (out of 5.5 million eligible voters) (come on, people), the majority are registered Democrats. This makes the expat vote the “bluest state in the country” and has even earned the Democrats Abroad Chair, who sits on the DNC alongside 7 other Democrats Abroad members, a very special moniker at the Democratic National Committee — Julia “Margin of Victory” Bryan.

“Americans abroad who vote are poised to make the difference in a lot of elections, especially in a midterm year,” she says. "These races are often decided by thousands or even hundreds of votes. That’s where the Democrats Abroad vote can really swing elections — if we send in our ballots.”

It’s no surprise, then, that Bryan’s main focus leading up to November 6 has been voter turnout. Making voting easier and solving voter problems is key to increasing that turnout. Under Bryan’s guidance, Democrats Abroad has launched a number of new tactics and tools including a voter tool that allows voters to more easily send in their ballot requests and a massive digital awareness campaign aimed at reminding American expats that voting in the midterms is both possible and paramount.

“It is absolutely essential that Democrats take back the House. Without a House majority we will lose key social legislation like Social Security and Medicare, and a fully Republican Congress would allow Trump to lurch the country further down the path away from democracy. It would be a disaster."

As for Trump, Bryan expresses relief that the US has so far managed to avoid war under his leadership. But the rest — attacks on women and the LGBT* communities, overt racism and the hateful crackdown on immigrants and refugees, disrespect for rule of law and the overall death of standards — has been enraging, if not necessarily a surprise.

Despite what has come out of the White House and Congress over the past two years, Bryan remains positive and outlines cause for optimism.

Doug Jones’s victory over Roy Moore in deep-south Alabama? “It’s hard to exaggerate how much of a miracle that is.”

Prospects for a woman in the White House? “Absolutely we will see a woman president.”

Will racism breathe its last? “It’s clearly still alive. But I’m inspired that more people of color and minorities are running in this year’s elections than ever before, and I firmly believe that will be a source of change. White nationalists in America may be loud and frightening, but they are far outnumbered by those of us who know that the fight for equality and justice for all Americans is a fight worth having, and we will not back down.”

Hope for future generations? Here Bryan recalls taking her then 6 year old daughter to Obama’s landmark 2009 nuclear-disarmament speech outside the Prague Castle. When Obama asked the crowd, “Who would have thought 30 years ago a black man would be elected president?” Caroline shouted back, “We did that!” And Bryan thought beamingly, my work here is done.

Well, almost. There’s still the midterms, then the 2020 presidential elections, and a lifetime of political activity ahead. For now, Bryan can be certain November 6th will mark her next big morning as an American and a Democrat Abroad. “We've got a lot to do - I won’t sleep at all.”