Rigged Elections: ‘45’ Snatched This One, Too! 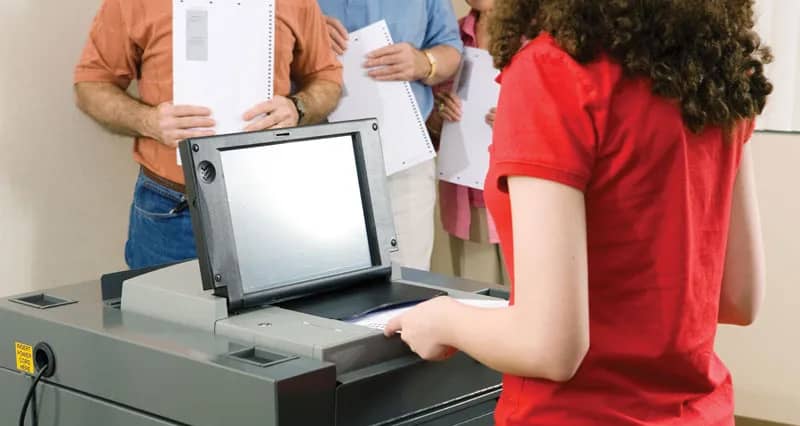 Voters wait to feed their ballots into an optical scanning machine

1984 or so, Fisherman’s Wharf in Columbus, Greek Nite. Joining us every month or so was the executive team from Borden’s: Al, Peter, and Tash. Peter, who had been on the team that developed Elmer’s glue, had Cefalonian roots. Tash had a penchant for club singing and was actually quite good at the mic. And then there was the old sage, Al. Some current panic over nuclear war or enviro disaster was in the air, and Al said, wisely, peppering it with examples from the Dark Ages and before, that mankind had always confronted plagues and disasters that were sure to wipe out the human race. And yet, we’d always overcome them when science and logic kicked in. I look back on his assurance with hope. ~KL

If democracy succeeds on mutual trust, then planting seeds of doubt is the first step at brushing that pesky people’s choice aside. And, there are a lot of seeds being planted this year. It bears a closer look.

We’re told almost daily that Trump and his acolytes will run again in 2024 and claim another ‘rigged election’ if results go against them. They are, we’re cautioned, already planning to throw 2022 results under the bus should they lose.

This may well be true. However, the story is not so simple. It has not always been Republicans raising the cry about Democrats rigging elections. In fact, just a couple of decades back, Republicans looked like the fly in the soup.

Those new to the game may believe that election fraud, tampering, or rigging is a new phenomenon, drummed up by the Trump camp. Those of us who go back a few years remember that they didn’t raise the first alarms. They’ve merely pirated the issue.

It was the 2000 presidential election that gave us ‘hanging chads,’ those flawed punch-card ballots read by optical scanners. If the hole wasn’t thoroughly punched, the chad (the bit punched out) might hang on, be seen by the machine as ‘in place,’ and cancel the vote cast for that candidate. Added to that were the butterfly ballots, unevenly aligned across two pages and confusing to many voters. Florida was ground zero for these problems. Also, the ballots in a number of states were still difficult for ‘physically challenged’ voters to access and vote without a helper. Something had to be done.

In the meantime, the GOP and George Bush’s team were ready to challenge the Florida vote in the US Supreme Court and win. Democrats were caught, apparently, off guard. Bush was the new president.

By the next presidential year, 2004, America had instituted the HAVA (Help America Vote Act of 2002), mandating accessible voting machines, in particular, the new DREs, Direct Recording Electronic devices. Touch screens would make voting easier for the physically challenged. There would be no hanging chads. Elections would be free and fair. Life would be good.

Except it wasn’t. Or at least it didn’t look good. Something smelled rotten and it wasn’t in Denmark.

Some of us went to bed on Election Night 2004, with Kerry firmly out in front of Bush; 53 to 47% sticks in mind. And so it should have been, with Afghanistan and Iraq invaded and questions beginning to arise over how we’d gotten into that latest conflict. Yellow cake, aluminum tubes, weapons of mass destruction and Mission (still not) Accomplished. Kerry was a shoo-in, right? We woke the next morning to reports that Bush had won. The percentages seemed to flip overnight.

Since then, election analysts have fine-tuned how ‘flips’ can legitimately happen, often as a result of certain parts of the electorate voting earlier, or certain batches of ballots being counted first or later. At the time, it looked highly suspect. And there were, in fact, some local jurisdictions that hinted of real problems in how their elections were conducted. Cuyahoga County in Ohio was one of those, and suspicions later turned out to be well founded. New Mexico also noticed some questionable returns.

At the time, however, those glitches were investigated and it was Democrats worrying about how the Republicans had blind-sided us once again. Dems did nothing, but in Ohio the Greens and Libertarians pooled resources to demand a recount. Harvey Wasserman and Bob Fitrakis, in Columbus, helped ‘disenfranchised voters’ mount a lawsuit. It lost. But the message was clear. There was a problem with the DREs. And with certain jurisdictions. It fell to a new Ohio Secretary of State, Jennifer Brunner, to sort out and clean up the Cuyahoga problem. (Brunner is currently running for chief justice of the Ohio Supreme Court.)

Meanwhile, a slew of voting-integrity activists jumped into the game, collecting data, trying to suss out the problems. BlackBox Voting, organized by writer-activist Bev Harris, was one. Ari Berman, still writing on voting rights advocacy, rose to the forefront. His May 2021 interview with DemocracyNOW updates the attempts to suppress voting.

Shape of the Early Problems

Problems were identified, and state election officials of both parties began looking at solutions. First and foremost, the early DREs didn’t provide a paper trail. The vote was recorded electronically, period. When it came time to ‘audit’ the count, the only numbers were the ones on the hard drive.

Add to that, the software that recorded the votes was ‘proprietary.’ In other words, the private companies that provided the machines and the software that ran them owned the programs. So nobody but the providers could actually check the programs. If others could see the code, said the vendors, they could alter it slightly and sell it for their own profit. End-results tests were the best election officials could do. Some of them failed.

Also, in 2004, a number of the vendors were proud and avowed Republicans. In Ohio, the Secretary of State, Ken Blackwell, was also the co-chair of the Re-elect Bush campaign. But one vendor, Smartmatic, stood out. It was owned by two Venezuelans, though registered and headquartered in Florida. In 2004, confusing claims about collusion with the late Venezuelan leader, Hugo Chavez, were made. On the other side, claims were made that one or more companies were in cahoots with the Clinton Foundation and George Soros. (Would any conspiracy be complete without naming Soros?)

Amid federal investigations, companies or parts thereof were sold to others in the business. But, in 2020, once again, these debunked collusion claims were dredged up and sent viral. This time, Trump supporters claimed Dominion Software, a Canadian company with US HQ in Colorado, was owned by the Venezuelans and owned (or was owned by, take yer pick) Smartmatic. Reuters fact-checked this tangled theory and debunked it. However, within hours the conspiracy theory had spread across social media. Dominion subsequently sued Fox News and other corporations for defamation. Dominion CEO John Poulos, interviewed recently on 60 Minutes, set the story straight. Smartmatic is suing Rudy Giulliani et al.

Finally, there was the problem that, in 2004, the whole thing was new. Local election officials were just figuring out where to plug in the new machines. Some of them were given machines to hold till election day. And at least one held them at home, in their unlocked garage. Whoops!

Before long, a Princeton U professor and a couple of students had figured out how to plant a bug in the software in the brief space of a minute if they had the key to the box. And the fears re machines being able to flip a blue vote red … or a red vote blue … were engaged.

The frosting on the cake was the expense of the voting machines. In 2002, the HAVA had provided money for states to purchase the new DREs. As the problems arose, and the machines aged, some states found themselves without adequate resources to upgrade and improve their systems. Some machines had been in service for almost 20 years when 2020 rolled round.

Still, in the interim, a lot of work had been done, and many states had, indeed, upgraded. Or done what they could to secure the vote.

Among other things, machine security was worked out and improved. The problem of audits was dealt with by installing ‘paper trails’ of sorts. Many states had a simple tape printer installed in their machines. As the voter cast a ballot, the results showed via a window next to the touch-screen surface. The voter could check that what they’d selected was, in fact, what the machine recorded.

Enter The People’s House, David Pepper’s first ‘political thriller’ (spring, 2016). It’s a fun read, very informative … and not much alluded to since Jan-6-2021. Note that Trump has co-opted Dems on election integrity, too.

In House, Pepper, a former chair of the Ohio Democratic Party, points out a fatal flaw in the machine-tape device: Most voters don’t read the tape carefully. The fictional Russian oligarch who comes up with the scheme realizes that. The software is set to flip every 5 or so votes to his favored candidate. If the voter catches the flaw, and corrects it, the vote stands as corrected. But the scam succeeds on the notion that most voters won’t look that carefully and sufficient flipped votes will go right on through.

There are more ways to rig an election, which Pepper weaves into his subsequent three novels. The methods are all substantiated by election experts at universities. Based on all the research, states have corrected many of the known flaws. And election suppressionists have moved on to other games. Pepper has moved on to examining the role of state legislatures in furthering anti-democratic goals.

In the 60 Minutes interview, Dominion owner Poulos, shows one improvement many states have put in. The vote isn’t recorded inside the DRE and applied to a small, hard-to-read tape. Rather, the voter uses the touch-screen machine to mark the ballot. The ballot is printed out, full page, for the voter to check. And then, it’s fed into the OMR machine which records the vote and preserves the print-out ballot for later hand-count audits. This is a definite improvement, providing both a hard copy that’s easier to read and stored for comparisons to the vote total if a hand-count is needed.

Road Ahead, Ever Vigilent

On the other hand, there are still, and will be, problems. First among these may be the casual reliance on the Internet as a way to make voting easier and faster. It has had great appeal among some Americans, especially those living abroad in countries with poor mail service. How wonderful if we can cast our votes electronically! Unfortunately, IT security experts point out that security cannot yet be fully guaranteed. Nonetheless, some states have already adopted at least partial electronic voting, or return of ballot by email attachment or fax, both of which can still, theoretically, be hacked ‘enroute.’

Coming around full circle from 2000 to 2022 … and those wise words from 1984 … like any other problem in modern society, election integrity is ongoing and subject to repeated problem-solving. As someone’s old grandma said, “Each new solution breeds new problems.” And that means we should expect new problems, new solutions, and the next round of same.

In most states, election officials have done just that, examining the potential pitfalls and drafting new ways to prevent them. They are perhaps the real heroes, working tirelessly to ensure election security. Meanwhile less scrupulous politicians rush to scarify the public to shrink the franchise and guarantee they stay in power. Beware the candidates for vote-counting positions that continue to deny election results!

The important thing to remember is that election integrity and full enfranchisement of every eligible voter is an ongoing effort. And that the current ‘rigged election’ hullabaloo from the authoritarian camp is just that! Balderdash aimed at softening us up so they can try another grab at power.

Repeat frequently: "Nuh UH! Not on our watch!"

Brennan Center – October 24, 2022
5 Facts About Voting — and Myths Being Spread About Them

Karen Lee is a past chair and current secretary of DAGR.