In a recent roll call by DAFrance of policy victories under the Biden Administration, there was no mention of the progress on student loan debt forgiveness, a remedy key in the battle to achieve economic well-being for female borrowers.

For women, student loan debt is a major obstacle as illustrated in the data below. About 45 million borrowers owe a collective $1.7 trillion in federal student loan debt; 58 percent of all student loan debt belongs to women, and after graduation they earn less than their male counterparts, make higher loan repayments, and on average take longer to pay off their debt. This reality affects the short- and long-term economic wellbeing of women, particularly women of color. 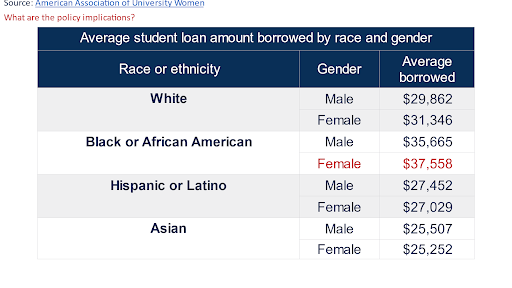 So, let’s celebrate some gains on this issue-

On August 15th, the Department of Education announced $3.9 billion in loan cancellation to students who were misled or defrauded by education institutions. This announcement, coupled with an earlier decision, now total $11.45 billion in student loans cancelled against schools like ITT Technical Institute and DeVry University, to name a few. Policy measures that cancel or reduce the loan debts of persons with disabilities and public servants such as teachers, firefighters, nurses, and military personnel also have been instituted this year. To date, over $32 billion in student loan debt have been cancelled during Biden’s term in office.

Americans are divided on the issue of whether loan debt forgiveness should be granted. But it should not surprise anyone that much of this opposition comes from men; nearly 40% of them say no loans should be forgiven as compared to 20% of women who share this position.

As we celebrate this achievement, there is some unfinished business. The 2-year pause on federal student loan payments enacted through the CARES Act is set to expire on August 31st. Under this measure, student loan repayments have been suspended, along with interest accrual and collection efforts. Let us hope that the Education Department will extend the student loan pause. As important, let’s see if Biden makes a final decision about enacting wide-scale student loan forgiveness, including the award of $10,000 per student in loan forgiveness. To that we say, Happy Equality Day to millions of women!