Are you interested in streaming documentaries to gain a deeper understanding of the history of the former Soviet Union and its republics? Here are our tips:

Winter on Fire: Ukraine’s Fight for Freedom This documentary is the story of Ukraine’s fight for freedom from the frontlines of the 2014 uprising, which started as peaceful student demonstrations and after 93 days became a violent revolution with the corrupt president ousted. A visceral feel for who Ukrainians are up against and their indomitable spirit. (Netflix)

Crimea, As It Was This documentary focuses on the highest human values: honor, loyalty to oath and courage as the Russian forces were moving into Crimea in 2014. This 2016 documentary shows the methods Russia used to occupy territories of independent states while focusing on the soldiers and seamen who stayed true to their oath to the citizens of Ukraine. (UkrStream.tv)

The Guide This grim but gorgeously shot Ukrainian drama is set during 1932 and 1933 when millions of Ukrainians were killed during a man-made famine engineered by the Soviet government of Joseph Stalin. It follows an American boy who, after witnessing his father’s assassination, travels the Ukrainian countryside with a blind itinerant bard. (EasternEuropeanMovies.com)

Atlantis Science fiction doesn’t get more prescient than this drama, which imagines Ukraine in 2025 as a frozen wasteland littered with corpses and battered machines. Just when it appears things can’t get bleaker for a PTSD-scarred soldier who is trucking precious potable water, hope arrives. ($5 on demand)

Ukrainer: The Movie An impressionistic portrait of Ukraine finds the spirit of the country in a lighthouse keeper, a honey farmer, and other unique citizens of a beautiful land. (YouTube)

Chernobyl (2019) This acclaimed 2019 miniseries excels at conveying the dread that spread after a 1986 explosion at the Chernobyl nuclear plant. (HBO Max) 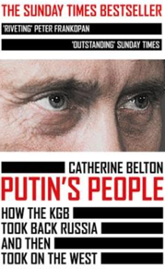 "[Putin's People] will surely now become the definitive account
of the rise of Putin and Putinism."
―Anne Applebaum, The Atlantic

"This riveting, immaculately researched book is arguably the best
single volume written about Putin, the people around him
and perhaps even about contemporary Russia itself in the past three decades."
―Peter Frankopan, Financial Times