ERA Update:  Do it for Ruth! Please Vote for Equality!

The Equal Rights Amendment is now in the courts and Senate. Although Virginia became the 38th state to ratify it in January, the US Archivist has still not added it to the U.S. Constitution. The Department of Justice (DOJ) has advised that the deadline set in the preamble of the amendment had a deadline for ratification, and that Virginia’s ratification of the amendment came too late. 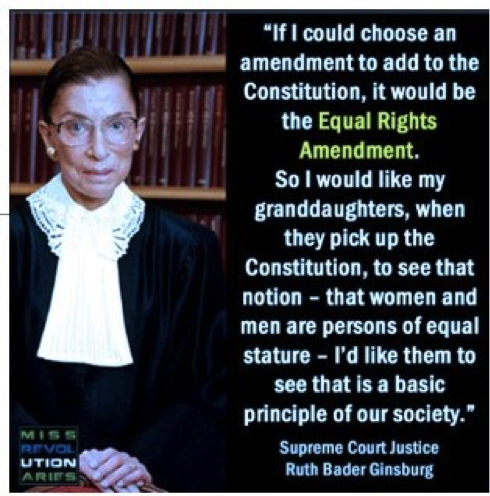 Many legal scholars claim the deadline was not part of the amendment and is unconstitutional. There are two court cases – one at the Supreme Court and one in the DC courts. The U.S. House has passed a resolution to eliminate the deadline, but Mitch McConnell will not take it up in the Senate.

There are several scenarios about what could happen next. YOUR vote could have some influence on the outcome. Here are some of the scenarios and how your vote can help:

Please Vote for Equality and please tell all your family and friends to as well.