Thanks to universal healthcare my son avoided a tracheostomy #DAresists #Medicare4all 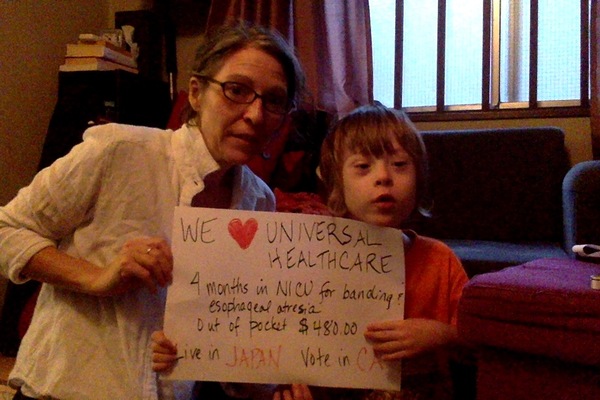 There isn't a day that goes by that I am not grateful that my son was born in Japan, where we enjoy universal healthcare. My husband, son and I pay $500 - 650/month depending on our income the previous year, which covers 70% of my husband and my medical expenses and 100% of our son's. My son is now a healthy vibrant 7-year-old, but I can say with almost complete certainty that he would be much less verbal than he is - if he would be speaking at all - had he been born in the United States. Theo was born with Down syndrome and with some of the medical issues that most newborns with Down syndrome have. In his case, this was a complete AVSD requiring open heart surgery and esophageal atresia (his esophagus not connected to his stomach). He spent his first 9 months in the hospital and required six surgeries in total. After his second operation, it was discovered that he had tracheal malaise (which meant that the cartilage was not strong enough to keep his trachea sufficiently open). The doctors had two options: (1) move his open heart surgery up and include a secondary procedure that would tie his trachea to his aorta and keep it open enough until his cartilage was strong enough to keep his trachea open on its own or (2) a tracheostomy. Here in Japan, there are no insurance companies to approve or reject a doctor's recommendation, and my son's doctors were able to decide their course of treatment on their own, with our approval. They opted for heart surgery with the secondary procedure, even though it was not guaranteed to work and it would require an extra two weeks in the ICU. Thankfully, they did, because in my son's case the secondary procedure did work and he is now in first grade at the local elementary school - a healthy, active, happy boy. In the US, insurance company-driven protocol requires that patients who cannot be extubated within 10 days receive a tracheostomy. The only other option would be out-of-pocket payment for an extended ICU stay. We would have been bankrupted (most likely way before this with the initial surgeries required), and my son would've had a tracheostomy that would've stayed in place until he was 4 or 5 years old. His speech would've been delayed, as would his physical development. The subsequent therapies, not to mention the ongoing care for the tracheostomy itself, would've generated a great deal in additional expenses. In our case, thanks to universal healthcare, we paid $100 - 200/month (in addition to our monthly insurance bill) while he was in the hospital to cover diapers, food, and a cot for his parents to sleep next to him at night. Not a day goes by that I don't reflect on how very lucky we are.