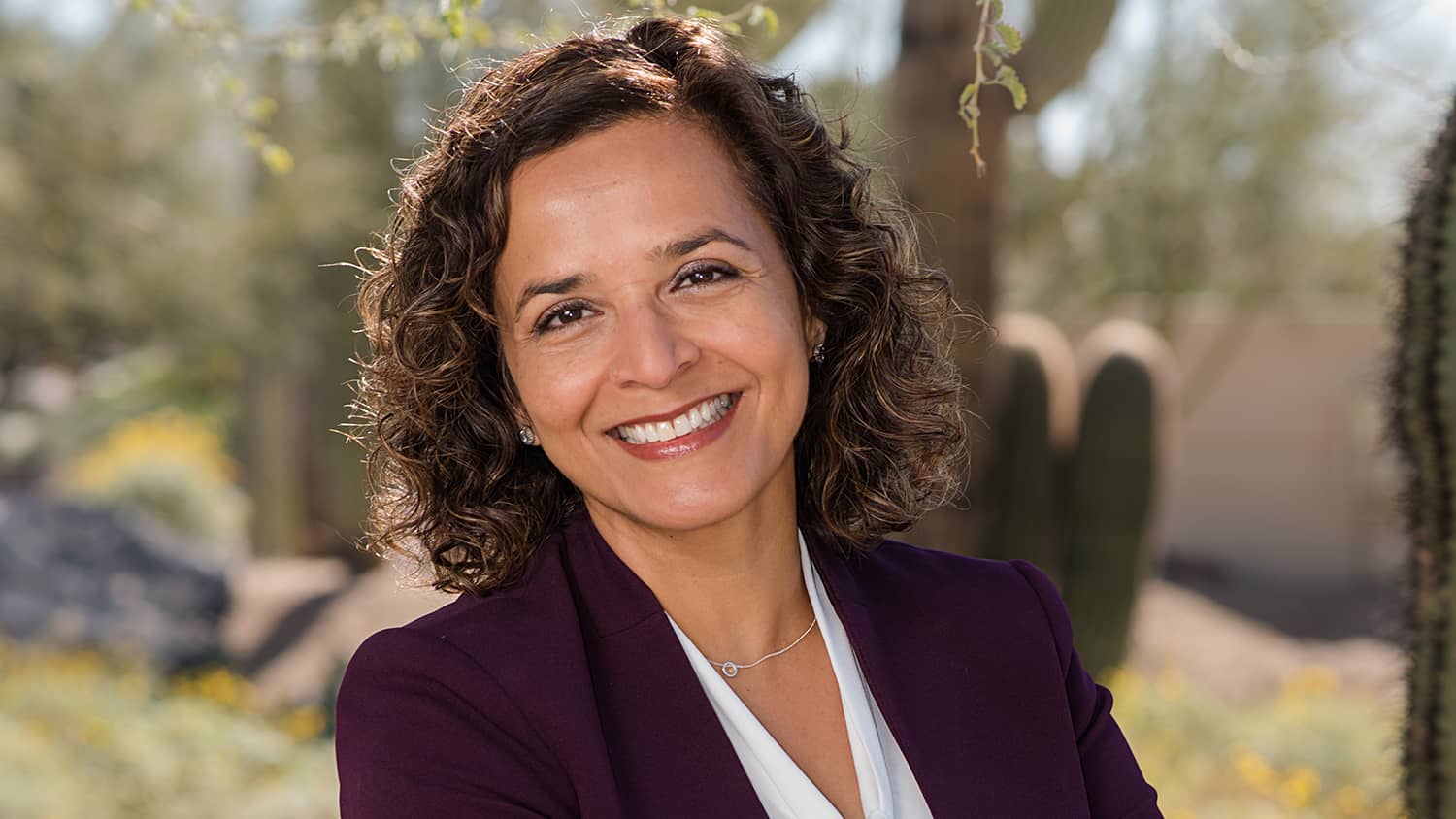 Dr. Hiral Tipirneni has dedicated her life to serving her community. At a young age, Hiral understood the impact small acts of service have on others. Her family left India for the United States when she was three. Though her family struggled at first, her father secured an engineering position in Ohio. Raised in a working-class suburb outside Cleveland, Hiral watched her mother, a social worker, give back to the community through volunteer work with Meals on Wheels. After a childhood illness, Hiral became interested in medicine. Upon graduation from public school, she earned her medical degree at Northeast Ohio Medical University and decided to practice emergency medicine. For over 20 years, Dr. Tipirneni has improved Arizona lives as a Phoenix-area emergency room doctor, cancer research advocate, and most recently on the Board of Directors for the Maricopa Health Foundation. Dr. Tipirneni’s appeal to voters is specifically because her background is not from the political world, “My work has never been partisan. My background as a physician, I don’t come from a world of politics. It’s been about problem-solving, achieving goals, and making someone’s health and life better. That is the skill set I plan on bringing to DC because I believe we need more nonpartisan or bipartisan problem solvers. I am willing to work with anyone who will come to the table, roll up their sleeves, and get the job done. It’s about finding common ground. This campaign has been focused on the real issues on communities and not ideological battles. And that’s what Americans are looking for, real solutions.”

After winning her Democratic primary election last month, Arizona’s 6th District Congressional candidate Dr. Hiral Tipirneni is ready to take on her opponent in this highly anticipated race. In Maricopa County, Dr. Tipirneni hit the ground running hours after her primary win. She has amassed broad support among prominent leaders in the state, built a passionate volunteer team from the ground up, and is polling incredibly well. In an exclusive interview with Democrats Abroad, she said this about her fast-paced campaign, “Since our primary our race has been on an amazing trajectory forward. Our race has been designated as a toss-up. It went from likely to lean to toss-up. Not taking anything for granted, we are working hard to widen our lead. We want to make sure we get our message out to every single voter. Obviously we can’t go door-to-door so we are trying to find voters in every way we can.”

AZ-06 is a gradually changing district. Covering parts of the most populous Arizona Maricopa county, it includes Phoenix, Scottsdale, and the surrounding suburbs. “Arizona has changed over the years. District 6 is a microcosm of our whole state. It is shifting more moderate but I think this election is a real tipping point. It’s not just a gradual demographic change, it’s actually public opinion on the issues. You see it in the voter registration shifts where independents are the biggest growing portion of our electorate. A victory for Mark Kelly or Joe Biden is going to come right through our district.”

Dr. Tipirneni has been on a socially-distanced listening tour of her district and she is hearing the many concerns from constituents but healthcare and the economy top the list. These issues are echoed around the country as the pandemic exposes further cracks in our economic and healthcare systems.

HEALTHCARE: As a physician, Dr. Tipirneni comes into this race with a wealth of knowledge on how badly broken healthcare is in the States. She stresses that her plan is neither a Democratic nor Republican plan but an American one. She argues that a collaborative approach which addresses the twin pillars of expanded coverage and cost containment is the best way forward. As an emergency room doctor, she has seen firsthand the struggles of the uninsured as well as the direct, tangible benefits the ACA has brought to real peoples’ lives. “The number one thing I hear about from constituents is healthcare. This was an issue before the pandemic but now it is even more urgent. Not only do we have concern for those millions of Americans that were uninsured or underinsured before the pandemic but we now have millions who are unemployed, many of whom have lost their healthcare benefits or coverage. That was already a broken system to start with but this pandemic has really shown us how fragile & precarious our healthcare and our economic systems were. That’s why it’s important to learn the lessons of this pandemic moving forward.”

Dr. Tipirneni imagines a one-stop shop allowing consumers to compare both private and public insurance plans, including a robust Medicare buy-in option, “My goal is quality, affordable healthcare for every American. My background as an emergency physician I have seen first hand family after family struggle without access to the healthcare system. Coming in far too late in their illnesses, waiting too long with a sick child or sick parent they come in already stressed about whether they can afford the bill. This should not happen in our nation.” Her Republican opponent offers the complete opposite take, “Representative David Schweikert has spent the last 9 years in office trying to repeal the ACA and protections for pre-existing conditions. Even now in the middle of this pandemic, my opponent is supporting this administration’s effort to strip 23 million Americans of their healthcare overnight.”

GOOD PAYING JOBS, THE ECONOMY, AND A FAIR TAX SYSTEM: A good paying job along with an economy that treats workers with dignity and respect lifts American families out of poverty. Education and hard work epitome of the American Dream. However, the middle class is slipping away under our economic system and particularly during the ongoing pandemic crisis.

Arizona is known for its business-friendly climate and low-operating costs however families are now living off minimum wage jobs that were meant to be a starting point. Dr. Tipirneni believes investments in human capital will cultivate an innovative, knowledge-driven economic ecosystem. “We need to make sure we are investing in our middle class communities, building our economic potential by good paying job creation and infrastructure,” Dr. Tipirneni explains. Her extensive plan would make sure those who are self-employed, freelance, contract or operating a small business do not fall between the cracks either. Here are just a few policies she supports:

Dr. Tipirneni is laser-focused on drawing the vast differences between her and her Republican opponent. As the Scottish say, they are like chalk and cheese. Her opponent has had numerous ethics violations, take corporate money, and is clearly not a good representation of the 6th district. Dr. Tipirneni explains, “Folks are fed up with the corruption and the self-serving behavior in DC. It is magnified by the current president but it trickles down to all levels. My opponent is a perfect example of that. He was found to have 11 ethics violations and reprimanded unanimously on the floor of the US House. An abject disregard for law, for truth to the point where he misused tax payer money, he lied, he fudged campaign finance reports and just abused his power. People want to root out the corruption. They really return some sense of transparency and greater accountability to our elected officials.”

“People are talking about taking out the outsized influence of corporate money in politics. My opponent is a prototypical example of all that is wrong in Washington. This is a guy who clearly has a very strong pay-for-play record. That’s what this comes down to is who are you working for? The big interests and donors or the people of the 6th district?”

This year’s presidential election the nation’s eyes will be on Arizona. A swing state that is leaning blue, particularly after Mark Kelly entered the race. This district just needs a boost in voter turnout as it will be won on the margins. If you call Arizona’s 6th district home, your vote could be the one that wins it for Dr. Tipirneni. “I am thrilled to be on the ballot with Mark Kelly as we both have a deep respect for science and data. I think that’s why we are both resonating with folks across the political spectrum because it’s about bringing pragmatic solutions to the issues we face and putting forth an evidence-based approach to policy making.”

Get involved with supporting Hiral! Visit her website and follow her on social media for the most up-to-date information on the campaign: