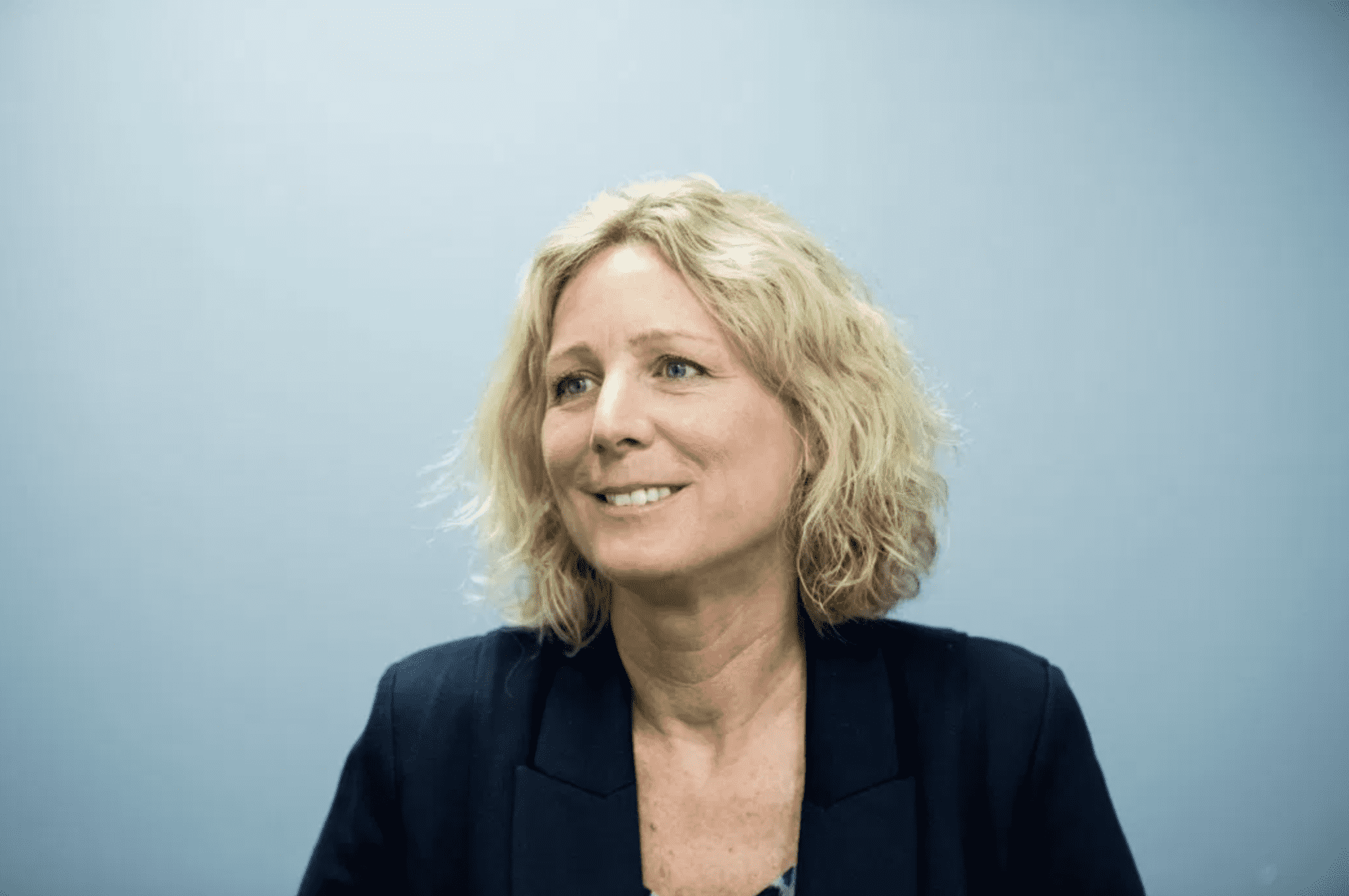 Running for Congress, Gretchen Driskell is determined to win. A proud Michigander with a Midwest work ethic, Driskell has the grit to flip Michigan’s 7th Congressional District blue.

An MBA earned in the middle of the night. A single mom raising her three children. A full time commercial real estate agent while serving her community as the first female mayor. Here’s another woman from Michigan who is a force for good.

Public service is a thread that weaves throughout her family. Gretchen is the daughter and grand-daughter of Navy veterans. “I was raised in a family of military service so I was taught from an early age to get involved in your community.” As a new mom in southeast Michigan, Gretchen understood that old adage that it takes a village to raise a child. Exploring the Saline area through the eyes of her child, she saw some room for improvement. During those long, cold Michigan winters, families turn to recreation centers and libraries to socialize. At the time, Saline needed a new rec center and the library needed an expansion. Without skipping a beat, Driskell volunteered to chair the fundraising committee for the rec center. “I just raised my hand to help. That’s how I got started. I wasn’t really thinking about politics. I was just thinking about how I could help.” She volunteered with the city government for a couple of years (getting that new recreation center off the ground) before running for city council. “I ran on downtown revitalization. Being a mom you really think about community systems in parts education, in parts healthy living and how those support families in the area.”

After serving a few terms on city council, she ran against a one-term mayoral incumbent who had forgotten what it meant to serve the people. During that mayoral campaign, she had three small children all under the age of 10. Her fortitude and compassion won over the community. Driskell became the first female elected to the position and, ultimately, the longest-serving mayor. During her time as mayor, Gretchen went through a difficult divorce that impacted all aspects of her life. These challenging years without health insurance, juggling childcare, serving as mayor, and working as a commercial real estate agent helped shape the Democratic positions she runs on today. “As a single mom, I realized how much I took for granted when I was in a better financial situation. What I learned during that time drives a lot of what I do today and why I am running. You can’t pull yourself up by your bootstraps if you don’t have boots. Those boots are a good education system, healthcare, access to quality food, clean drinking water and a safe place to live. There are so many things that our government has a role in. I was raised that when you work hard you get ahead but that isn’t necessarily the case for everybody. The reason why I am running is to make sure that when you do work hard, you can get ahead no matter your background.”

During her 14 years as mayor, Saline was named one of the top 100 small cities in America three times. She also passed 14 balanced budgets, prioritized and improved local schools, and investment in infrastructure while drawing in small businesses to the downtown area. She is proud that during her tenure, she worked to attract new ventures to diversify Saline’s economy and to build Saline’s reputation as a place to do business.

When her daughter graduated high school, Gretchen ran for state office and won a seat in  Michigan House representing rural Washtenaw County. During her time in Lansing, she worked for better rural broadband access, made sure that her community was at the top of the list for infrastructure improvements, and made it easier for small businesses to access local capital. Today Gretchen continues to live in Saline and is the proud mother of three children, Ryan, Matthew, a naval aviator, and Marielle and her granddaughters. Driskell is a woman who never gives up, always fighting for a better Michigan.

Healthcare: Universal healthcare is hotly debated in the United States, but for many Americans abroad, it’s a lived experience. Gretchen supports universally accessible, affordable health care. Knowing what it is like to raise a family without affordable coverage, Gretchen is well versed in tackling this divisive topic. “There are many Michiganders who have not recovered from the 2008 recession. So their wages are stagnant and their healthcare costs are going up. That’s if they even have healthcare coverage. When I was in the legislature we did expand access to Medicaid getting over 600,000 folks covered. But Republicans keep trying to roll that back or put restrictions in place. So affordable healthcare and lowering the cost of prescription drugs are a priority here.”

Before COVID-19, Gretchen was canvassing for her campaign when she stopped into a café. Introducing herself to the cashier, one of the first things Gretchen asks her constituents is, “What would you like me to know while I am in DC working for you?” The lady at the register told her that she recently lost a good friend because her insurance cut off her prescription drug. Since she couldn’t afford to take them any longer, she ended up dying. “This is something I hear on a regular basis,” Gretchen explains, “It’s heartbreaking.” In addition to affordable healthcare coverage and lowering prescription costs, mental health is given the attention it deserves. She supports comprehensive mental health coverage and the requirement that all healthcare policies cover mental health. Additionally, resources on the ground embedded in working class communities are needed. “Rural hospitals are not as strong as they need to be. The whole healthcare system is really broken and we need to make sure we have affordable healthcare that covers everyone.”

Education: A robust local economy starts with an excellent public school system. Driskell understands the importance of supporting our youngest students, providing opportunities for children to succeed and families to flourish. “I support universal preschool and book ending that with free community college. There’s been major cuts to the public school system. Schools help create community and I support properly funding neighborhood schools.” In an effort to get a head start on an associate’s degree, high school students in Michigan are able to attend college courses earning credits before graduation. Once they complete an associate’s, they can easily transfer their credits to a university and finish up a four-year degree. This path saves a lot of money for families, alleviating the burden of student loans. Driskell wants to ensure that every Michigan student who wants to pursue a college degree has affordable access to it by protecting the at-risk public sector student loan payoff program, and by enhancing the Pell Grant program. Additionally, the campaign recognizes that the trades need to be reemphasized, and students need the know-how to start their own businesses.

Jobs: Most Michiganders work in manufacturing, production assembly, retail, restaurant, or fast food business and agriculture. During this global pandemic, working-class people are once again taking the brunt of this economic crunch. 45% of the state’s workforce has been touched by temporary or permanent job loss since March 15. Driskell looks to the future during this historic time. “Currently wages are stagnant, our economies are manufacturing and agriculture. Agriculture is strong but it’s not a big employment base. Manufacturing is in a huge transition, every business is trying to cut costs and automate as much as possible. As of 2012, we are a right-to-work state so there’s a lot of cutting of corners. We are trying to get worker’s rights back in the forefront but we have to get a majority in Lansing. Before Covid-19 about 40% of folks living in our district were living paycheck to paycheck. We need to support job growth by helping our small businesses and diversifying our job market with high-tech and green jobs. Clean energy jobs are good paying opportunities that can benefit both workers and the environment.”

During recent protests, Gretchen has talked to a lot of young, local activists who are fed up with the direction America is headed. “I know a lot of young people are frustrated with “the grownups,” and we haven’t done right by them. I have been to multiple protests this week and I hear that over and over again. This is a great opportunity to get involved with a campaign and make a change. We are all in this together.”

Perseverance during times of adversity defines who Gretchen is and this race is no different. It will be her 3rd time running for this seat against an incumbent who has been in office for over 27 years. In her first run she lost by 15% but in her second run in 2018, her loss was cut in half to 7.6%. This year it’s a presidential election and all eyes will be on Michigan. A swing state that is leaning blue, particularly after another Gretchen (Governor Whitmer), went head to head with the White House. Women are leading in Michigan. This flippable district just needs a boost in voter turnout as it will be won on the margins. If you call Michigan’s 7th district home, your vote could be the one that wins it for Driskell.

Get involved with supporting Gretchen! Visit her website and follow her on social media for the most up-to-date information on the campaign: