"Women aren't equal in America? That is crazy, Mom!" 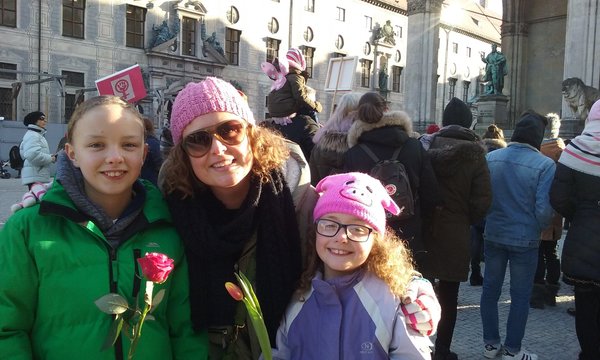 Before we set off on the Women's March here in Munich in 2019, I told my children some of the reasons behind the March and they were genuinely shocked. I agreed with them and lamented, "I can't believe we are still having to fight this fight!" I want my daughters and my son to grow up being proud to be Americans - to know that they come from a society that is truly equal for all people. In 2021, sadly this is still not reality for so many. We have so far to go with gender and race equality in the United States that sometimes it can feel overwhelming, but the ERA is our best tool to ensure women's equality is protected by law and we have to fight for it. The last four years of (non)leadership within America has demonstrated the ever present obstacle of misogyny and how important it is to have women's rights protected and enshrined in law. Achievements have been made and there is no doubt that Vice-President Harris is a role model for all Americans, but her extraordinary position is exactly why we need the ERA now. Let's get to the point where a woman in a leadership role isn't extraordinary, it is just the norm.   Germany Resident, PA voter