President Biden, before he was elected, made promises about what he would accomplish in his first 100 days. Signing the Equality Act into law was one of them.

Unfortunately, the legislation — which seeks to ban anti-LGBTQ+ discrimination and has already passed the U.S. House — is languishing in the Senate. But it’s not for lack of Biden’s prodding.

In fact, on Biden’s 99th day in office, during his first joint address to Congress, he called for the Senate to pass the Equality Act. “I hope Congress will get to my desk the Equality Act to protect LGBTQ Americans,” Biden said.

He added a message to the transgender community. “To all transgender Americans watching at home, especially young people who are so brave: I want you to know your president has your back.” 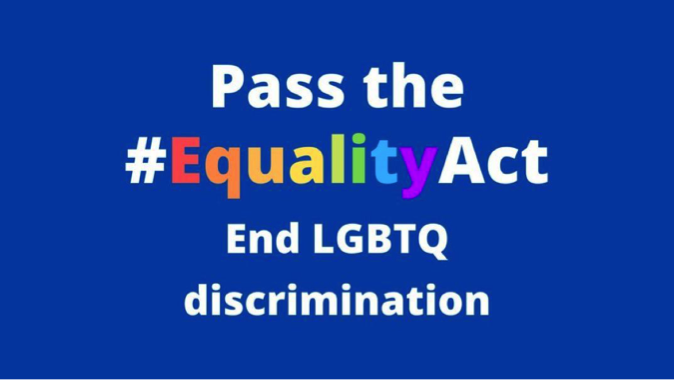 While the shoutout was historic, it also came at an important time. Republicans, both on the federal and state level, are using transgender Americans as the wedge issue to block any attempt to protect LGBTQ+ people.

Currently, legislatures in seven states have passed bills that would ban transgender youth from student athletics. Another 20-plus states have seen similar bills introduced.

Ironically, while elected Republicans are trumpeting this strategy, Republican voters overwhelmingly oppose such bills. An NPR/PBS NewsHour/Marist poll found that only 29 percent of Republicans said they “support a bill that prohibits transgender student athletes from joining sports teams that match their gender identity.”

Even supporters of such bills have a hard time defending them. Most notably, Republican West Virginia Gov. Jim Justice — who signed his state’s bill into law last month — was caught wide-eyed by MSNBC anchor Stephanie Ruhle when she asked him to name just one example of a trans student athlete in his state. When he couldn’t, Ruhle asked, “Sir, you have no examples of this happening. Why would you take your time to do this?” He then went on to explain that he knows of, “Twelve kids maybe in our state that are transgender-type kids.”

Even Caitlyn Jenner, a Republican candidate for governor of California who herself is transgender, has come out against allowing trans student athletes from playing. “This is an issue of fairness,” she told TMZ. “This is why I oppose biological boys who are trans competing in girls’ sports in school. It just isn’t fair. And we have to protect girls’ sports in our schools.”

The Democratic Party is fighting back. The White House is even considering challenging these new laws with legal action. Press Secretary Jen Psaki has said that it is President Biden’s view that these bills are illegal under federal law.

DNC Chair Jaime Harrison and LGBTQ+ Caucus Chair Earl Fowlkes released a joint statement, saying that these anti-trans bills are “vicious and serve no public purpose.” They added, “Our nation desperately needs the Equality Act and its protections for LGBTQ+ people, and we call upon Republicans to abandon these attacks on the transgender community and join us in passing this critical legislation.”

But reconsidering filibuster rules — which are the impediment to a whole host of Democratic priorities from social infrastructure to voting rights — is opposed by at least a couple of Democrats (most notably Joe Manchin of West Virginia and Kyrsten Sinema of Arizona). And if that situation doesn’t change, passage of the Equality Act rests with gaining support from Republican senators.

Currently, federal civil rights laws protect people on the basis of race, color, national origin, and in most cases, sex, disability, and religion. But federal law does not explicitly protect against discrimination based on sexual orientation or gender identity. The Equality Act would amend the Civil Rights Act of 1964, the Fair Housing Act, the Equal Credit Opportunity Act, the Jury Selection and Services Act as well as other laws to include sexual orientation and gender identity as protected categories.

Despite the current filibuster rules, as well as Republican senators using transgender athletes as a wedge issue to oppose the bill, Democratic Sen. Jeff Merkley of Oregon, the bill’s Senate sponsor, remains optimistic.

“I am deeply committed to working on a bipartisan basis to find the necessary votes to pass this landmark law,” Merkley told the Washington Blade newspaper. “… Those conversations are ongoing. I am gathering feedback and working with colleagues on both sides of the aisle — and with civil rights organizations — to find a path forward that will bring senators together behind a vision of full equality for LGBTQ Americans.”

Democrats Abroad has set up a Legislative Issues Group to work for passage of the Equality Act and advance LGBTQ+ protections across the 50 states and DC.

Are you interested in being a DA liaison to LGBTQ+ equality groups in your home or voting state? We’re building links with groups like Georgia Equality, which recently joined DA for a webinar on voting rights and LGBTQ+ rights in Georgia. You can watch it here

If you’d like to get involved, learn more about the proposed legislation and help make equality under the law a reality, contact the LGBTQ+ Caucus at [email protected].