Blog: The Plight of Twin Sisters’ Devotion in WWI

The Cromwell Sisters - No Way Out but a Tragic End

Dorothea and Gladys Cromwell, twin sisters, were born in Brooklyn in 1885. They were descendants of Oliver Cromwell and inherited a fortune from their father.

During WWI the twins volunteered to work in France, near the front at Chalons-sur-Marne and Verdun, for the Red Cross in a canteen and as nurses. Harriet Rogers, assistant head of the canteen, described the twins as follows: “They are angels who not only do first-class work on day or night service, but also find time to visit the soldiers in the French hospitals and to befriend the little French refugee children.”

For eight months they worked under fire on long day and night shifts; they slept in “caves” or under trees in a field; suffered from the exhaustion that is so acute to those who have never known physical labor; yet no one suspected until the end came that for many months they believed their work a failure, and their efforts futile. . . . overwhelming strain and fatigue had made them more weary than they realized, and the horrors of conditions near the Front broke their already overtaxed endurance. 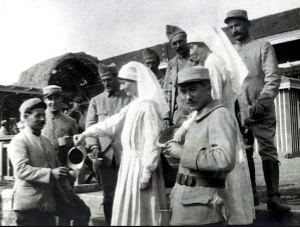 They wanted to continue working in France even after the Nov. 11, 1918 armistice ended the combat. But their only brother, Seymour persuaded them to come home. They boarded the SS La Lorraine on Jan. 19, 1919, for the trip back to New York.

United States Army Private Jack Pemberton was on duty on the upper deck of the La Lorraine the night it started for America. As he huddled against the wind and a cold mist, he saw two women, each wearing a black cape, walking arm-in-arm, talking. One of the women climbed atop the ship’s rail, then disappeared. The second woman followed, also climbing the rail and disappearing into the blackness. Pemberton heard two faint splashes below. He alerted the bridge, and the alarm was sounded. But it took 15 minutes, before the ship could be slowed. By that time the river channel was too narrow for the ship to turn around and search for bodies.

In New York, their brother, Seymour, who served as the president of the New York Stock Exchange, was unconvinced of their deaths and the possibility that they had committed suicide. He had received “a cheerful letter” from them a week before they were to sail. Two days after the La Lorraine sailed, he had received a cable from the sisters stating that they had missed that ship and would be sailing soon on another ship. In response to his inquiry to the shipping line, the captain of the La Lorraine had cryptically cabled back that the sister’s baggage was in their state room, but they were not on board. A note had been found in their stateroom, addressed to the head of their Red Cross unit, stating that they intended to “end it all.” According to a report in the Brooklyn Daily Eagle, four people on the Lorraine saw the sisters jumped to their death. On January 26, The New York Times reported that the police commissioner of Bordeaux had confirmed that their deaths were by suicide.

It appears that the Cromwell twins, subjected to the horrors of war, ranging from shelling to dealing with the carnage of the injured and dead, had been the victims of shell shock, a term that emerged with the horror of World War I. Today we would call it Post Traumatic Stress Disorder.

The bodies of Gladys and Dorothea Cromwell were recovered on March 20th. Both Cromwell sisters were awarded France’s Croix de Guerre and interred at Suresnes American Cemetery, on a hill overlooking Paris, with full military honors. It is the final resting place of 1541 Americans who died during World War I and a place of remembrance for 974 Americans who were lost at sea as well as for 24 American soldiers who are “known but to God.”

Excerpts from an article by Jeff Richman on January 23rd, 2017 in Green-Wood Historian Blog and posted by Tilly Gaillard and Karen Kenny.