Day Three at the Convention

Day Three at the Convention and we will be hearing from Vice President Biden, our next Vice President Tim Kaine - AND President Obama.  It should be an inspiring evening.  Tim Kaine is a long-time friend of Democrats Abroad. Here he is joining DA Switzerland with a votefromabroad.org banner. 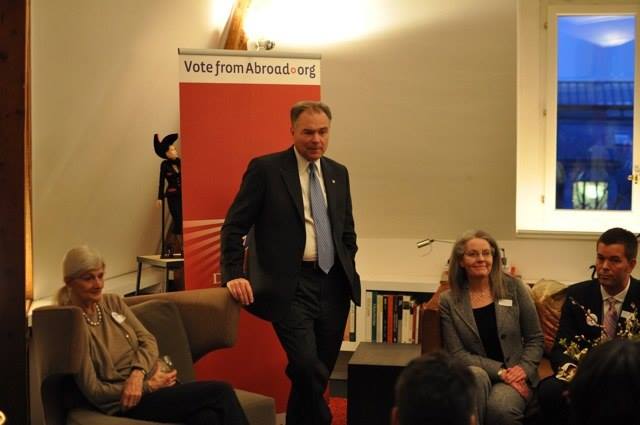 Here's another post from Ryan Turner - a Sanders delegate from Spain (and now Italy) - about Day Three.

Feeling and general intensity of the entire convention was definitely much calmer today than the first two days. One of the most memorable moments that Bernie fans remember from the previous day was the heartfelt words given by Larry Sanders to his brother Bernie. Things were relatively calm yesterday compared to Tuesday after a protest that occurred after Bernie Sanders call to waive procedural rules and declare Hilary Clinton the nominee by acclimation. The protestors proceeded to the media tent chanting "Walk Out! Walk out!".. I can assure you ALL that these protestors are the one percenters of sanders supporters. Of our entire delegation of nearly 2000 sanders delegates, I can say with certainty that there were no more than 30-40 protesters. They do not seem to represent the majority of us Berniecrats.

The two biggest surprises of last night's speakers were certainly Leon Panetta who was booed by the crowd due to his obvious ties to the is war involvement and Michael Bloomberg, a surprise speaker used by Hillary to reach out to independents and fiscal conservatives in the Trump camp. Joe Biden had the most electrifying speech of the night and his swagger and panache as a first-rate statesman and politician is always a crowd pleaser. He's easily one of Politics' most likable personalities! His message "it's not your example of power but the power of your example" that shows strength!

Lenny Kravitz amazing performance was another surprise. He shows that Hilary's star-level support is surpassed only by Barack Obama himself. Tim Kaine did basically the same speech he did last week... I predicted he'd start speaking random Spanish and I was right!

Barack Obama.. BARACK OBAMA!  I don't care what he said or how he said it.. In fact.. For the most part it was difficult to hear most of what he said. I was there in the room with the man himself! One of the most memorable experiences of my life!