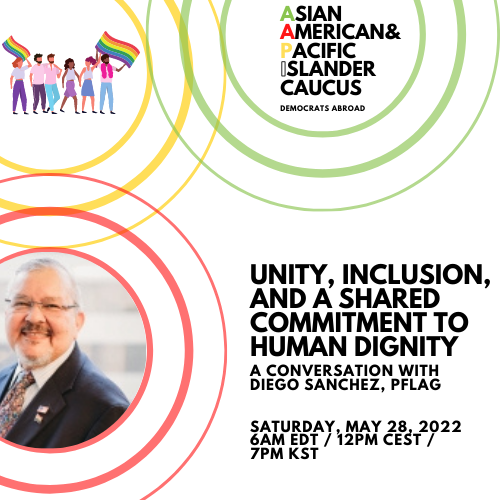 As the Asian American and Pacific Islander Heritage Month comes to an end, join us as we transition into PRIDE month and celebrate intersectionality within our communities. Hear from Diego Sanchez, Director of PFLAG’s Advocacy, Policy & Partnership program to learn about their work, particularly as it relates to advocacy and voting, and issues related to intersectionality for people of color who also identify as LBGTQ+.

PFLAG is the first and largest organization for lesbian, gay, bisexual, transgender and queer (LGBTQ+) people, their friends, families, and allies with over 250,000 members across the U.S. PFLAG is committed to creating a world where all people are respected, valued, and affirmed inclusive of their sexual orientation, gender identity, and gender expression.

PFLAG’s programs of advocacy, support, and education serve to fight many of the same issues that the AAPI Caucus is also concerned with such as discrimination, violence and harm, and removing the root causes of violence and injustice, including systemic racism, sexism, discrimination, and harassment.

After the overview session, there will be discussion on how we can assist voters abroad in these key areas.

A native of Augusta, GA and long-time Massachusetts resident, prior to his appointment with PFLAG, Diego was Senior Policy Advisor to Congressman Barney Frank until the Representative’s retirement in 2013. Diego made history with that appointment, being the first openly transgender person to work as a senior legislative staff member on Capitol Hill. He also testified before Congress in the historic Transgender Discrimination Hearing in 2008 and that year was named as the first openly trans person ever appointed to the DNC Platform Committee.

Diego also served as Director of Public Relations and External Affairs at the AIDS Action Committee of Massachusetts, and AIDS Action Council, DC. Before moving into the nonprofit sector, Diego worked for 20 award-winning years in global public relations, marketing, and diversity management at world headquarters of Fortune 500 companies.

Diego was among The 100 Most Powerful Latino/s in Corporate America named by Hispanic Business Magazine, named an LGBT Latino Hero by the Mayor of Washington, D.C., in the 100 most powerful Latino/s (Poderometro) in Massachusetts by El Planeta and in 2013, named to the Out 100 and in the Inaugural Trans 100, sponsored by GLAAD.

Diego is also a Senior Fellow of UMass Boston’s Emerging Leaders Program in the College of Management.