As we continue to celebrate notable Latinx persons during Hispanic Heritage Month 2019, the Democrats Abroad Hispanic Caucus urges all Americans to take the time to reflect on the vast contributions made to the cultural fabric of the United States by Hispanic Americans. One of the many ways to engage with this discourse surrounding Hispanic-American life and culture is through music. Julieta Venegas, a Mexican-American singer and songwriter, uses her art to address political topics relevant to the United States and Mexico. 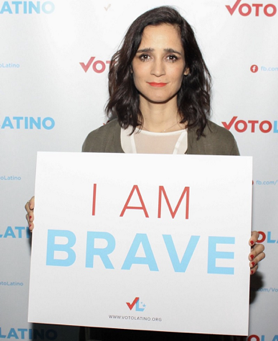 This bilingual, dual-citizen Latina did not become a Grammy-award winner overnight. Born in California and raised in Tijuana, Venegas was overwhelmed with musical influences from both countries. She is no stranger to blending inspiration from rancheras, hip hop, jazz, pop, tango, rock, folk, soul, and other musical genres to convey personal and political meaning to an equally diverse Hispanic community. Growing up on the U.S.-Mexico border clearly helped shape Venegas’ youth, giving her a unique perspective over the importance of political engagement among Hispanic voters in the United States.

While much of her earlier works reflected on personal emotions, her music these days increasingly focuses on a celebration of immigration, cultural diversity and Latin identity, and a call for more political participation. Venegas has performed with some of Latin music’s biggest stars who also have a shared desire to see Latino voting turnout increase. During some of her duet performances, she has been known to encourage Americans to register to vote and to double-check voting eligibility during live shows.

And while many celebrities opt to stay out of the political spotlight, Julieta Venegas has enthusiastically partnered with Voto Latino, a U.S. non-profit organization that works to empower young Latino voters. Recognizing that many Latinos have historically felt disenfranchised from the political process, Venegas has used her influence to make a difference in civic engagement. As an artist who plays at events worldwide, Venegas ensures her concert venues include tables and staff to raise voting awareness.

Venegas’ passion for getting Latinos to care about politics illustrates the importance of voting every year. Elections from school boards to the Oval Office hold immense potential for turning the tide against the injustices faced by Hispanic Americans. We in the Democrats Abroad Hispanic Caucus strive to convey this urgency to Americans living overseas. Julieta Venegas performs to bring the message home.