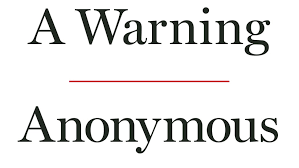 I just finished reading "A Warning" by Anonymous, a senior official in the Trump administration.

For anyone following US politics, the book does not present anything we did not already know about the impeachment hearings, leaks and Trump tweets. Nevertheless, the book presents a remarkably cogent -- and damning -- appraisal of the ongoing train crash of the Trump presidency, a train crash in which not only US citizens but also large parts of the world are passengers and victims.

The book underlines all of the reasons why President Trump is manifestly unfit for office, and why he needs to be removed. Reading "A Warning", I have little doubt that a second Trump presidency will spell disaster -- for the US, for Americans, and for the world.

Though passengers in that crashing train, heading into the 2020 election year we (still!) have the possibility to use our right of citizenship to remove the engineer of our disaster.

But we must use this right and responsibility -- and get many of our fellow citizens to do the same.

Our votes matter. Trump won Michigan by some 10,000 votes -- about as many as went to the Green Party, and a far smaller number than those Michiganders that did not bother to vote at all. Imagine how different our world would be now had they decided otherwise.

I have given up trying to reason with and persuade Trump voters. The fact is that -- at least at the ballot box -- it is enough simply to get the reasonable to use their right to vote.

In 2020, go vote -- and make sure others do too. Talk to your family and friends. Phone bank. Inform, remind, persuade and cajole. Our future depends on it.