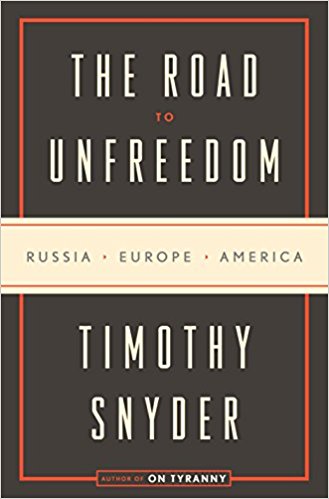 Timothy Snyder will be opening the 3rd Vienna Humanities Festival from September 27-30, 2018. Find out more about the program on the IWM website. He has also recently published a new book.

The Road to Unfreedom: Russia, Europe, America by Timothy Snyder

With the end of the Cold War, the victory of liberal democracy seemed final.

Observers declared the end of history, confident in a peaceful, globalized future. This faith was misplaced. Authoritarianism returned to Russia, as Putin found fascist ideas that could be used to justify rule by the wealthy. In the 2010s, it has spread from east to west, aided by Russian warfare in Ukraine and cyberwar in Europe and the United States.

Russia found allies among nationalists, oligarchs, and radicals everywhere, and its drive to dissolve Western institutions, states, and values found resonance within the West itself. The rise of populism, the British vote against the EU, and the election of Donald Trump were all Russian goals, but their achievement reveals the vulnerability of Western societies.