“No Man Left Behind” 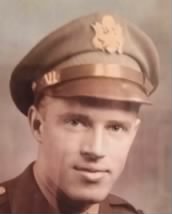 Too severely injured by German anti-aircraft fire to save himself, B17 pilot 1st Lieutenant George F. (Frankie) Wilson Jr. of the 601st Bomber Squadron, 398th Bomber Group Heavy, managed to keep his burning plane flying high long enough for his 8-man crew to bail out while on a mission to destroy a German liquid oxygen factory and a rocket launch site in a gigantic bunker in Siracourt, Pas-de-Calais, in northern France. He died as his bomber exploded in a farmer’s field in Monchy-Cayeux, Vallée Blanche. Declared missing in action: an Army Air Corps pilot from Utah. The date was July 8, 1944. He was 23 years old.

Decades passed until July 2018, when Wilson’s great niece Sonni Bornemeier and her husband, Air Force Sergeant Erik Bornemeier, were on a humanitarian mission. Having been influenced by the TV series Band of Brothers, they decided to look for the legendary great-uncle ‘Frankie’ and contacted Pierre Vion, a journalist running an online newspaper near the crash site area.

Sonni had heard very little about her grandmother’s brother, just that he was a pilot who died during WWII. Erik, who had newly declassified military records and maps showing crew names, destination, objective and location, left home in Utah and went to Monchy-Cayeux to start exploring the crash site of the great-uncle’s B-17 bomber. Erik was a natural for the job, as he himself was head of a search and rescue team in Davis County, Utah.

The journalist Pierre Vion had written a series of articles about the crash in his newspaper, Le Gobelin de Ternois and called for witnesses on social media. The response was strong and immediate. There were also reports from the crew members. The first one to bail out was Sergeant Ferguson, the only crew member not captured. He was found by a French lieutenant, Arthur Festive, who arranged for him to be taken out of France by the British on September 8, 1944. The other crew members were captured by the Germans upon landing and held as POWs until the end of the war, when all returned home to the US.

According to crew member Gerald Dye, the bombs were about to be dropped, but not being able to identify the V1 rocket-launching production unit, the B-17 overshot the targeted German bunker and had to circle around a second time. That was when the Germans shot the plane down.

Another crew member gave this description: When the plane was hit, Pilot Wilson tried to keep it flying but he knew he would not be able to return to England. He had been wounded in the stomach, slumped on the instrument panel and lost a lot of blood.

Another crew member had this to say: With no one at the controls, the B17 sped toward a field at the edge of a waking village. The right wing of the plane hit the ground, and the aircraft burst into flames. The B17, its pilot and its load of bombs disappeared in a tremendous explosion.

According to Adrian Ponchant, who was 10 at the time, and saw the crash: It looked like a giant had picked up the plane, smashed it and threw it to the ground.  Adrian, his brother and friends cut up the fuselage and sold it as scrap metal around the end of 1945 and early 1946.

Back to July 2018. On the first day of their search with a metal detector, Erik, his colleague, Colonel David, and the locals found the wreckage site, including a piece of Plexiglas with melted edges, a fragment of a propeller, a large piece of aluminum and a 50-caliber bullet, the type used by B17s.

The question was: What happened after the plane exploded? Was Pilot Wilson buried at the site of the crash by the villagers or by the Germans? Was he moved to another location? Several bombers had already been shot down in this area. In another bomber crash, the pilot apparently survived and opened a bistro together with a French lady in Auchel.

Mr. Legrand, an elderly man we met near the site, said that the soil on the crash site had become lighter and the wheat crop “grew differently”. He said that the fuselage was in the field for several months or even years before being salvaged by the locals and sold as scrap metal in bits and pieces.

Michel Tilleul, now in his 80s, remembers the crash well and said bullets were flying and that after a third turn, the plane crashed and exploded on the ground. He said that the Germans recovered the remains of the body and that he saw some flesh with brown hair.

Mr. Massart, who lives down the street from the present search site and who will be a sprightly 90 in December, was in a shelter complete with bunk beds, as was often the case in those days.  When the plane crashed, he said that three planes were shot down around that area. His future wife, 12 at the time, was hit by shrapnel in the leg and shoulder.

Pierre Vion explained that a farmer’s father had talked about a plane that crashed in his field and that he kept finding pieces of metal, storing them in a hangar until the roof caved in during a storm, when he had to clear it out.

Erik Bornemeier returned in 2019 and met with a fair number of people who remembered the crash. Colette, Marie Christine, and Michel Tilleul talked about the teacher and carpenter who found a wallet and a machine gun. (Another version is that some children found these items and turned them over to the teacher). Alain and Charles spoke of pieces of the plane being found near the house of village resident Simon, as well as the journalists of Gobelin and Abeille. This group became known as the La Communauté de la Baguette. Erik told the Communauté that the US government said the case was “nominated for recovery” and would authorize a search expedition.