We are taking this opportunity to celebrate Josephine Baker, whose remains were symbolically transferred to the Panthéon in Paris on November 30, 2021. Josephine Baker had an incredibly successful life in Paris and the U.S. as a dancer, singer, civil rights activist, spy and pilot! She is the first American-born citizen and the first performer to be immortalized in the mausoleum of France. This is France’s highest honor reserved for heroes of the French Republic.

Josephine left the USA for France in 1925 when she was 19 to pursue her career in Paris. She went to France which did not have segregationist laws like the U.S. (but had a more subtle form of racism) where she could participate in everyday activities without regard to her color. She left New York City, where she had become a popular performer, for Paris where she had a contract to perform with the Revue Nègre at the Théâtre des Champs-Elysées and then joined the revue at the Folies Bergères. 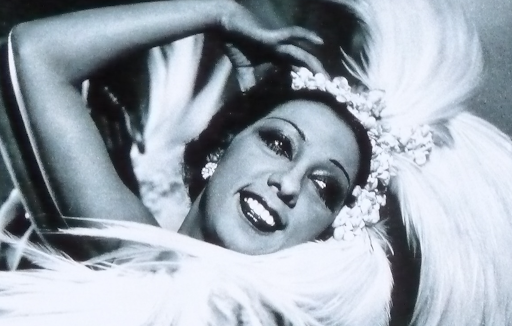 She was a sensation in France, becoming in the 1930’s the first international black superstar. It has been reported that she was the highest paid and most photographed woman in the world.

After her marriage to Jean Lion, a Jewish French industrialist in 1937, Josephine became a French citizen. She collaborated with the French Resistance during World War II. Using her fame as a cover for her spying activities, she transported secret information that she gathered by writing it down in invisible ink on her music scores. In 1944, Baker became a second lieutenant and a pilot in a female section in the Air Force of the French Liberation Army of General Charles De Gaulle. She was awarded the Croix de Guerre and the Legion of Honor with the Rosette of the Résistance.

When she toured in the United States, she refused to perform in segregated venues, so her shows had to have integrated audiences. She was recognized by the NAACP for her opposition to segregation. Josaphine would comment that there is only one race, the human race. In the 1950’s and 60’s she became involved in anti-racist politics. While Baker was a multi-talented performer, excelling in dancing and singing, she also made several successful major motion pictures released in Europe. Toward the end of her life, she ran into financial trouble and lost her properties. She and her children moved to Monaco at the invitation of Princess Grace who gave them a house in Roquebrune-Cap Martin.

On November 30, 2021, she was symbolically buried at the Panthéon where internment is reserved for national heroes, alongside 80 illustrious personalities and the sixth woman in a shrine formerly reserved for men that has the following motto sculpted on the facade: AUX GRANDS HOMMES LA PATRIE RECONNAISSANTE (“To the great men, the grateful homeland.”)

It was a great honor to be invited to attend the formal ceremony at the Panthéon and be part of the homage to a notable American. At the formal state ceremony, ten of Baker’s adopted children were present as well as Prince Albert II of Monaco, whose mother Princess Grace was a lifelong friend of Baker’s. Their friendship began at the Stork Club in NY in 1951 when Baker was subjected to racial discrimination, and Grace Kelly (later Princess Grace of Monaco) and her guests walked out in solidarity with Baker. In 1975 Prince Rainier, Princess Grace, and Jacqueline Kennedy Onassis organized a retrospective revue at the Bobino in Paris in celebration of Josephine’s 50 year Paris career. Josephine received standing ovations at the sold out performances.

Baker passed away from a stroke on April 12, 1975 several days after  the opening performance. She is the only American-born woman to receive full French military honors at her funeral. During the Panthéon ceremony, the cenotaph, carried by members of the French Air Force, draped in the French flag with Baker’s military medals on top, containing handfuls of soil from her birthplace in Saint Louis, Missouri, from France (Paris and the Château des Milandes in the Dordogne) and from her final resting place in Monaco (where her body remains in the Cimetière de Monaco at the request of her family) made its way up the red carpeted rue Soufflot. The street, from the Luxembourg Gardens to the Panthéon, was adorned with enormous photos of Josephine, and the Song of the Partisans sung by the Army Choir was heard throughout the neighborhood. “Paris I am back”: one of Josephine Baker’s most famous songs launched the start of the ceremony. “I have two loves, my country and Paris”, her most famous song, was played by the Air Force Band when the cenotaph arrived at the Panthéon.

This extraordinary celebration included a multimedia presentation with projections on the facade of the Panthéon of epic moments in Josephine’s life including images of Dr. Martin Luther King during the 1963 March on Washington at which Baker was the only woman invited to speak on the podium with Dr. King. Her speech focused on

her struggles and successes battling racism. “You know, friends, that I do not lie to you when I tell you I have walked into the palaces of kings and queens and into the houses of presidents. And much more. But I could not walk into a hotel in America and get a cup of coffee, and that made me mad.”

French President Emmanuel Macron paid tribute to this “world-renowned artist, engaged in the Resistance, tireless, anti-racist activist, involved in all the fights that bring together citizens of good will, in France and around the world”. Macron stated that Josephine Baker was entering the Panthéon “because while born American, deep down there was no one more French than you.”

The ceremony ended with everyone singing the Marseillaise.

What can we, as Americans, do to honor Josephine Baker? The first thing would be to posthumously restore her American citizenship. In 1937, after she married a French citizen, Baker lost her American citizenship because the U.S. and French laws at the time did not allow a woman to be a dual national. In an Op Ed in The Hill, on December 1, 2021, William Jordan, a retired Foreign Service Officer, suggested that “Congress consider passing bipartisan legislation posthumously rescinding the cancellation of Baker’s citizenship.” What can you do to help with this? Write to your representatives in Congress and ask them to propose a bill to this effect.

Check these videos of the ceremony and a special Today show

Places to connect with Josephine Baker: