The he-said-she-said debate between Senators Elizabeth Warren and Bernie Sanders surrounding the last Democratic debate has put the question of whether a woman can be elected president of the United States on the national stage.

In a presidential primary that has been hyper-focused on the question of electability, it is not altogether surprising that this question would come up – though it is surely disappointing for those who dare hope that votes today get cast based on a candidate’s policy proposals rather than his or her gender.

That Hillary Clinton won the popular vote in the 2016 elections by 2.87 million votes[i] suggests that a woman can be elected president of the United States – and indeed would be right now were it not for the Electoral College. That the New York Times Editorial Board issued its coveted endorsement this weekend to two female candidates, Senators Warren and Klobuchar, suggests that, at least to some, a woman should be president of the United States. 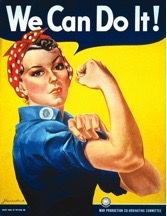 Importantly, in explaining the rationale behind both its choice and the departure from what has historically been a single endorsement, the Editorial Board did not raise gender as a factor of any kind. Instead, its decision hinged on the question that should be front and center this election cycle: once the Democratic party decides where to land on its own liberal-moderate spectrum, which candidate will be best equipped to convert a hopefully united party message into a general election win?

Whether or not Senator Sanders actually said that a woman could not win the White House – a claim he denies making[ii]– the ensuing media coverage has laid bare historical gender bias which has slowly ebbed from explicit to implicit, without ever fully receding.

At every level and for generations, women have confronted structural and cultural barriers to their sovereignty. Historically, it has taken slow, painstaking work to get women’s voices heard at the polls, first through the ratification of the 19th amendment in 1920 and then with the adoption of the Voting Rights Act in 1965. Legally, it has taken almost fifty years for the required 38th state (Virginia) to ratify the Equal Rights Amendment, an as of yet purely symbolic win given that the deadline for ratification passed in 1982.[iii] Financially, women are still not guaranteed equal pay, with the US Census Bureau estimating in 2019 that, on average, a woman working full-time makes 80.7 cents for every dollar a man makes.[iv]  Culturally, female presidents have increased in Hollywood narratives, but their rise to power is too often due to the resignation or death of a male counterpart (House of Cards, Veep, Commander-in-Chief[v]).

Yet despite the many, commingled and deeply entrenched roots of gender bias, progress away from it is underfoot. Even though the second Reykjavik Index for Leadership found no country in which women were deemed of the same leadership capacity as men across all sectors,[vi] a record number of female leaders are emerging on the world stage, and in the US Congress.

As Senator Warren pointed out at the last debate, the men on the stage alongside her had collectively lost 10 elections while she and her fellow female candidate Amy Klobuchar had won every election they had been in.

With those statistics, the right way to frame the question – if it really must be asked – is not why a woman can’t be elected president of the United States, but why she can.