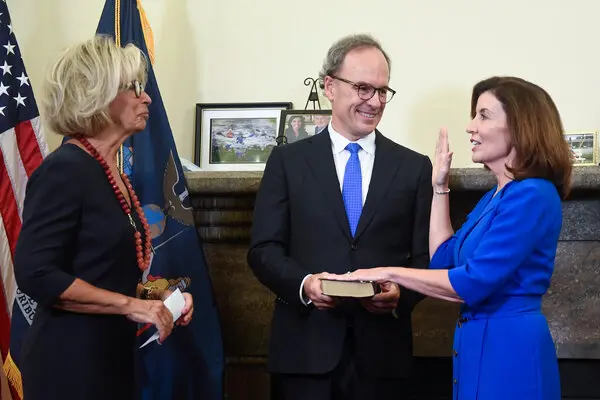 On August 24th, Kathy Hochul became the first female governor in New York State history after an abrupt end to the three-term tenure of Governor Andrew Cuomo over sexual harassment allegations. Hochul will serve out the rest of Cuomo’s term, while mounting her own campaign for election as governor in 2022.

Who Is Kathy Hochul? For the past seven years, Hochul has been NYS lieutenant governor. As a native upstate New Yorkers, she was selected by Cuomo during his 2014 bid to gain support from that part of the region. Her job, like those of others before her, was to represent the governor at functions around the State and lead initiatives related to State agenda. In that capacity, Hochul’s policy priorities included the issues of gender and economic inequality. She led a campaign for sexual assault prevention programs on college campuses which gained her recognition as a champion of women’s issues. Her past record also shows a strong commitment to issues like minimum wage, paid family leave, affordable housing, and clean energy. While her position on some issues, including immigration has been a mixed bag, Hochul’s ascension to the executive office is viewed by policymakers and advocates, alike, as a breath of fresh air!

Hochul enters the executive office with many challenges, among them:

--A surge in COVID cases just as schools are set to reopen in September,

--Averting massive evictions among NY households due to high unemployment during COVID,

--Immigration; an issue affecting over 4 million immigrants as well as the region’s economic recovery,

--A subway system in crisis, with a 50% decline in ridership due to COVID,

--Picking a lieutenant governor that makes her a “winnable ticket” in the next primary, and

All tall orders, in a short period of time!

As we celebrate Hochul’s rise to leadership as the first female governor, there’s another “first'' that is worth noting. The New York State legislature will have more women and people of color than ever before in its history. As Hochul governs with this diverse legislature perhaps New York will lead the way in achieving advancements for women and people of color. As democrats abroad, New Yorkers and women, 2022 and beyond looks promising.