RBG’s death was a national gut punch. It felt like a personal gut punch too - my family was finishing up our Rosh Hashanah dinner, celebrating the Jewish New Year as best we could, despite the strangeness of the broader year around us. Less than an hour before, we talked about our hopes for the coming year - and we all, from my 97-year-old grandfather to my 15-month-old nephew, agreed that getting rid of Trump, and taking back the Senate, was at the top of our lists. Then our phones buzzed with the news, and the room deflated. 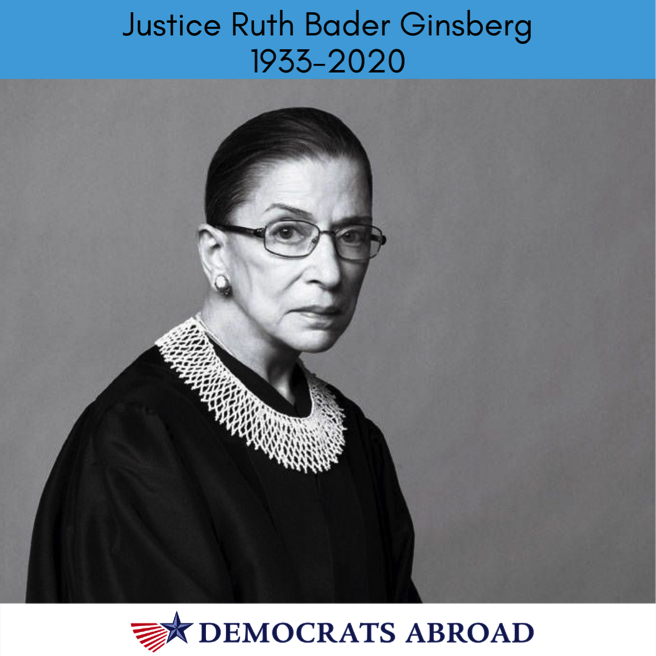 Like many of you, I’m sure, I started to cry, and my phone vibrated with texts from female friends and family saying just one single word. As a young, feminist, Jewish lawyer, Ruth Bader Ginburg was - is - one of my heroes. She quite literally changed the world for women in the US, and I, and so many others, stand figuratively on her tiny shoulders. The best way to honor her legacy, right now, is to thoroughly rebuke Trump, and the Republican Party in the election. We must unreservedly state that the values she fought for and protected are the values we want to govern this country - and then we must work to make them a reality for everyone, not just the privileged.

Let us stipulate that RBG, like any individual, wasn’t perfect - that her record, for example, on Native American sovereignty, and environmental issues could be frustrating. Let us also stipulate that so much should never have rested on the tiny shoulders of an 87-year-old justice. It is now, indisputably, on our shoulders to move forward with her work on the national scale. RBG was, at her core, an institutionalist, and she would expect us to use the institution of voting to protect and expand her legacy. If you also texted that single word to friends on the night she died, if you were filled with sadness, and rage, and you wondered, what will happen to us? That was a call to get to work. The answer is, we determine what will happen to us.

Make no mistake - with RBG’s death, access to safe and legal abortion is on the ballot in 2020. Voting rights are on the ballot. Healthcare is on the ballot. Labor rights are on the ballot. Marriage equality is on the ballot. Immigrant rights are on the ballot. The religious extremist, anti-choice wing that has co-opted the Republican Party to the exclusion of so many other issues wants to confirm another extremist conservative justice, and they want to do it ASAP. They have stacked federal and circuit courts with unqualified, anti-equality, anti-choice zealots, and they now have a chance to install another one on the Supreme Court, who will continue the assault on our civil rights and reproductive freedom. RBG knew that the government had no business legislating reproduction, but her commitment to protecting the right to determine your own was unwavering. She knew it was fundamentally about equality, and we must keep that in mind in working to elect Biden, take back the Senate, and flip state legislatures. Our fear and our rage and our sadness must motivate us here. It can result in the progress we want - if we work for it.

RBG didn’t underestimate her own power, and we should not either. Her death showed us once again, who the Republicans are, and the values they have. Right wing extremists celebrated her death, refused to honor her legacy, and rushed to name her replacement, hoping it will motivate voters for Trump. We now know that disrespectful Rose Garden event spread coronavirus through the White House, and to people who don't have the same healthcare as the President does. It was those people RBG worked to expand rights for throughout her career, and it is those people we should have in mind in voting, and working to motivate others to vote.

The extremist right put Trump in power to gain control over the courts, and the Supreme Court is their ultimate prize. We knew this before RBG’s death, and we know that turning out votes for Democrats is the way to protect her legacy from them right now. We must redouble our commitment to protect those rights they want to strip away, and we must channel our righteous anger beyond this election, to make her RBG’s legacy as broad and as deep as possible in the United States. She showed us the path, but we must remember it was never for her to go alone. We relied on her for too much for too long, and now it is our turn to hold her up, and to build on what she did.

RBG’s biographer said that the justice would tell us now, “You just have to move forward and get to work.” There are three weeks left until the election. In her honor, let’s get to work.