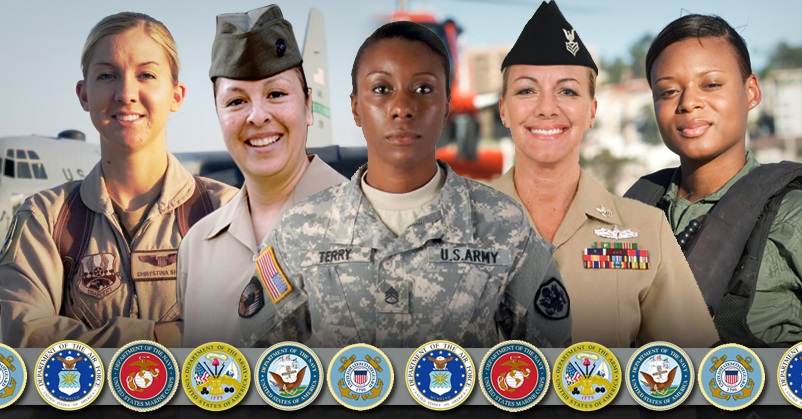 Yeager’s career is inspiringly barrier-busting, but it is also a hard reminder of the relative recency of female advancement in the US Armed Forces. As of 2017, women made up only 16% of active-duty personnel across all branches of the military, which represents less than a 2% increase from 2007.[ii] Moreover, the Department of Defense only opened all combat jobs to women in 2015.

This statistic is shocking when one considers how long women have been involved in the military. During the Revolutionary and Civil Wars, women served as cooks and nurses – and some even disguised themselves as men to fight on the front lines and deliver covert information past British troops. During World War I, women began working as phone operators, architects, secretaries, and administrative assistants. During World War II, as part of FDR’s Women’s Army Corps (WAC), women worked with Air, Ground, and Service Forces as radio technicians, doctors, surgeons, and cryptographers. The 1970s finally saw women fully included into the service, with military service academies starting to accept women in 1976 and forces officially integrated in 1978.[iii]

Since 2015, more and more women have enlisted across every branch of the military, but despite their growing representation, they still face severe challenges before and after service. Female soldiers are often unable to access adequate healthcare, bring charges against sexual offenders, or advance in their careers. Female veterans often feel unsupported in the reintegration process as they deal with mental illness, physical disabilities, and difficulty finding sustained employment.

A healthcare system geared towards men

Healthcare is one of the biggest areas where women face more challenges than men—mostly due to limited research focused on women’s healthcare. Pentagon-contracted researchers are preparing to conduct an in-depth study of women’s health services only this year, the first since 1989.

The data available paints a lackluster picture. A 2006 military survey of female soldiers who served in Operation Iraqi Freedom found that 22% of respondents had not received a gynecological examination, including a Pap smear or other cytologic study, and 44% could not access gynecological care once they enlisted. Almost a quarter of women surveyed reported having to change contraceptive methods due to unavailability, and more than a fifth experienced gynecologic problem.[iv]

Even more recently, in a 2018 survey by the Service Women’s Action Network (SWAN), 41% of veterans surveyed said that they were unable to access birth control after deploying. These barriers to contraceptive care were usually caused by limited prescriptions that did not cover the full deployment, inadequate storage options, and physician refusal to prescribe birth control.[v]

The SWAN study also highlighted the lack of support for women seeking an abortion following an unintended pregnancy. Among these women, half were denied medical advice by military health care providers while the other half did not even seek their advice. All defaulted to off-base abortion services, which cost $300-600; none received follow-up care from the military.

Per Tricare, the military’s health and insurance provider, abortion on military bases is only covered in cases of danger to the mother’s life, incest, and rape – and certain countries in which the military operates ban the procedure altogether.[vi]

Sexual assault is arguably the most publicized issue facing service women. A 2019 report on sexual assault in the military showed almost 21,000 instances of unwanted sexual contact—a 38% increase from 2016.[vii] Though women make up less than 20% of service members, they are the targets of 63% of assaults, and one out of every sixteen women has reported being groped during their service.[viii]

The effects of such sexual assault are evident after service – and disproportionally affect women. Nearly 25% of women veterans who seek health care services from the Department of Veterans Affairs report experiencing at least one sexual assault while in the military compared to slightly more than 1% of male veterans.[ix]

In addition to the obvious effects on mental and physical health, sexual assault and harassment impact career development for women, even if indirectly. Women report hesitation from their male superiors to interact or mentor them due to fears of sexual harassment allegations. Women service members report sexism and targeted harassment and physical tests, and they often feel that their male superiors do not have a clear vision for women’s roles in the military. These superiors often have lowered expectations for women and refuse to promote women due to ingrained biases, for instance relating to family responsibilities, which are often exacerbated by shortsighted military policies.[x]

Far from receding, sexual violence against women has increased even at military academies, where sexual assault has trended upward over the past decade despite prevention programs. An anonymous 2017 survey found that instances of unwanted sexual contact had increased 50% compared to two years prior, with many victims choosing not to make reports.[xi]

Female veterans in search of community

Even after they leave the military, women often face more acute challenges than men. Because there are so few women in the armed forces, female veterans often struggle to find a community that truly understands the reintegration process. Many report that they do not feel accepted by civilian women, and they struggle to find groups or friends that can discuss female-specific challenges with reintegration. Some veterans also report a reluctance to self-identify as a veteran because civilians do not readily accept female soldiers.[xii]

Economically, employment is a major challenge for women in particular. Over 33% of female veterans report lost income as a problem after leaving service, and women take three months longer on average to find jobs. Women are also more likely to be single parents than men, which then adds on the challenges of finding affordable childcare and keeping medical appointments at the Veterans Association.[xiii]

Women encounter major difficulties in the armed forces today, but these problems are far from novel. Neither Democratic nor Republican administrations have pressured the military into focusing on women’s issues, from healthcare to sexual assault to post-service employment. As we begin Military Appreciation Month, it is our hope here at Democrats Abroad that more candidates will highlight the challenges faced by our brave women in uniform—and thank them by providing them with basic services and support.