Discussing Parasite with the Progressive Caucus

We held a collaborative event with the Progressive Caucus - which we hope was the first of many -  to discuss the most notorious film of 2019, Parasite. The aim of this event, which took place on March 27, was to kick off a potential film club and to gather film buffs together to share ideas, perspectives, and raise concerns relating to society today.

Thank you to everyone who participated in our online vigil to stop AAPI hate. You can still send in a photo or a statement for our online virtual vigil. If you wish, you can watch the recorded event. We hope that you have had some time for yourself to process these events.

You can join the AAPI community check-in on April 21 hosted by Democrats Abroad France to discuss your thoughts and feelings about this wave of hate.

We have also put together a short reading list of articles for you that examine how the events of the past year have affected the AAPI community; of non-fiction books that explore the history and stories of AAPI communities; and of works of fiction that detail AAPI immigrant experiences. Please feel free to share this list.

Springing forward into climate awareness month, we want to highlight the unique AAPI perspective in advocating for a truly global solution to the problem of climate change.

On Monday, April 12th, we will co-host an event with the Global Veterans and Military Families Caucus to speak with former Congressman Robert J. Mrazek about his book The Indomitable Florence Finch. She was born to an American father and a Filipina mother, and widow of an American naval officer killed early in the Second World War. During the war, Finch brought necessary supplies to American POWs and worked to help others in the resistance. The event will take place at 8:30pm Seoul / 5:00pm Mumbai / 1:30pm Berlin / 7:30am Washington, D.C. Make sure to RSVP!

We look forward to meeting you at one of our events this month! 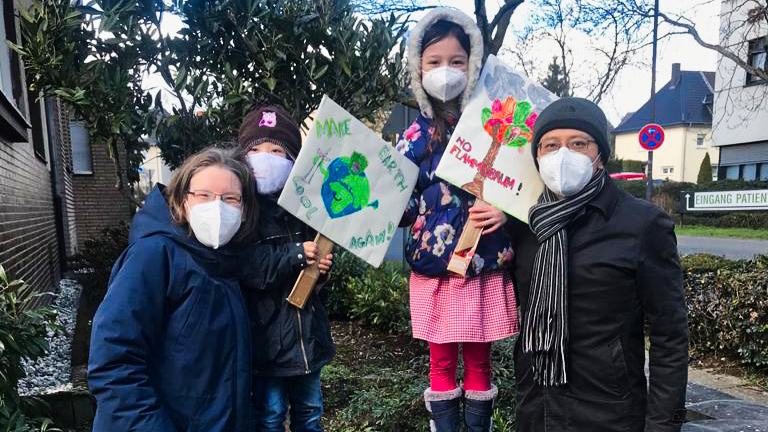 “Immigration law is something like a dam that holds back the natural movement of life.”

On March 25th, the Global Hispanic Caucus hosted the event “Immigration Reform: Farmworker and Dreamer Justice” in collaboration with the Global AAPI, LGBTQ, and Youth Caucuses as well as DA Canada, DA Spain, DA Mexico, and DA Germany. The event focused on the U.S. Citizenship Act of 2021, as well as the separate American Dream and Promise Act (HR-6) and the Farm Workforce Modernization Act (HR-1603), which are currently being discussed in Congress.

The first speaker was Tawheeda Wahabzada, a DACA (Deferred Action for Childhood Arrivals) recipient and the co-founder of Departed Dreamers, a group on social media to gather other DREAMERs & DACA recipients who left the country to provide a personal and professional support group for those who are starting a new chapter of their life in a foreign environment. She was raised in Carson City, NV, and moved back to Toronto, Canada in early 2020. Due to the restrictions put in place by the Trump Administration, she was unable to travel for her job and faced difficulties when talking with politicians, which contributed to her decision to leave. By leaving, it was a “way to finally reclaim [her] agency”. This decision to leave also meant that she cannot re-enter the U.S. for ten years. With the Dream and Promise Act, it will provide a streamlined pathway to citizenship for DACA recipients, as well as for those that do not qualify for DACA, and those with temporary protected status. As the bill moves to the Senate, Tawheeda stressed the importance of pressuring our Democratic Senators to preserve the original language in the Dream and Promise Act.

Eun Suk “Jason” Hong is an ex-DACA recipient from NY/NJ who moved to Madrid, Spain, in August 2019 to pursue a dual Masters degree. He co-founded Departed Dreamers with Tawheeda. Eun Suk shared his story and the sense of relief provided by the passage of DACA, which allowed him and fellow DREAMERs to step out of the shadows and feel like they may be accepted in their communities. For him, “The Dream and Promise Act isn’t about providing a legal status or paper or documents. It’s about giving people their freedom and their humanitarian rights. [...] The Dream and Promise Act is the vaccination that every DREAMER needs.”

Edgar Franks is the Political Director of Familias Unidas por la Justicia. He has worked on a variety of initiatives that led to greater protections and treatment of farmworkers and their families. This union is the only farmworker union to be founded in the last 30 years in the U.S. and is made up of indigenous Mexican people. Edgar spoke to us about the Farm Workforce Modernization Act, which was drafted during the Trump Administration and negotiated without much consent from farm labor groups. He pointed out some of the red flags of this bill and why this is not a bill farm workers actually want. This includes making e-verify mandatory, which requires the need of a valid social security number to allow someone to work, and the expansion of the H-2A program or guest worker program that allows employers to limit and control their movements and cap wages, among others.

Nicole Salgado moved into voluntary exile in Central Mexico in 2006 with her husband Margarito Reséndiz. Due to her husband’s immigration record, they had to leave the U.S. and wait ten years to apply for re-entry due to his permanent ban status. She wrote about it in her book Amor and Exile and shared with us the story of her and her family as they tried to re-enter the U.S. This included the psychological toll life in exile took and the stress of the process to re-apply for re-entry. She stressed the need for legislation to include families that are affected by exile and to help build awareness that families are being impacted in this way.

The event ended by the speakers answering some questions from the audience. A recording of the entire event can be viewed here. For those interested in participating in the “DREAM with Us” challenge, presented by the Global Hispanic Caucus, more information is available here.

**Main quote from Nicole Salgado during her talk at the event.

"It was a really welcoming way for people at any level of involvement to see how the org works and how to find their areas of interest," Sarah Mulloy, Vice Chair North and Central Bavaria Chapter, DA Germany

“I want to also say it was an excellent event and it was great to have so many people there who would not have ordinarily met," Veena Siddharth, Counsel DA Costa Rica

In the past four years, Democrats Abroad (DA) has seen a tremendous amount of growth in its membership. As we saw in 2020, having a strong volunteer base is crucial for achieving success and we will need to make sure we find ways to engage interested volunteers as we prepare for 2022. To introduce our members to the variety of opportunities available with DA, the Global AAPI Caucus and the Global Hispanic Caucus hosted the Connect the Dots Leadership Workshop series.

Three workshops, each at times convenient to members in the three main regions of DA (Americas, Asia-Pacific, and Europe, Middle East, and Africa) were held over a three-week time span. Leaders from the different levels of DA were invited to present about their experiences becoming an active volunteer and leader, and what their current role in DA entails. The speakers included:

Approximately 500 people that signed up for the workshops. The organizers received positive feedback from both speakers and participants. Moving forward, we hope to host similar events twice a year and bring in more volunteers to help Democrats Abroad continue to grow and reach more voters overseas. 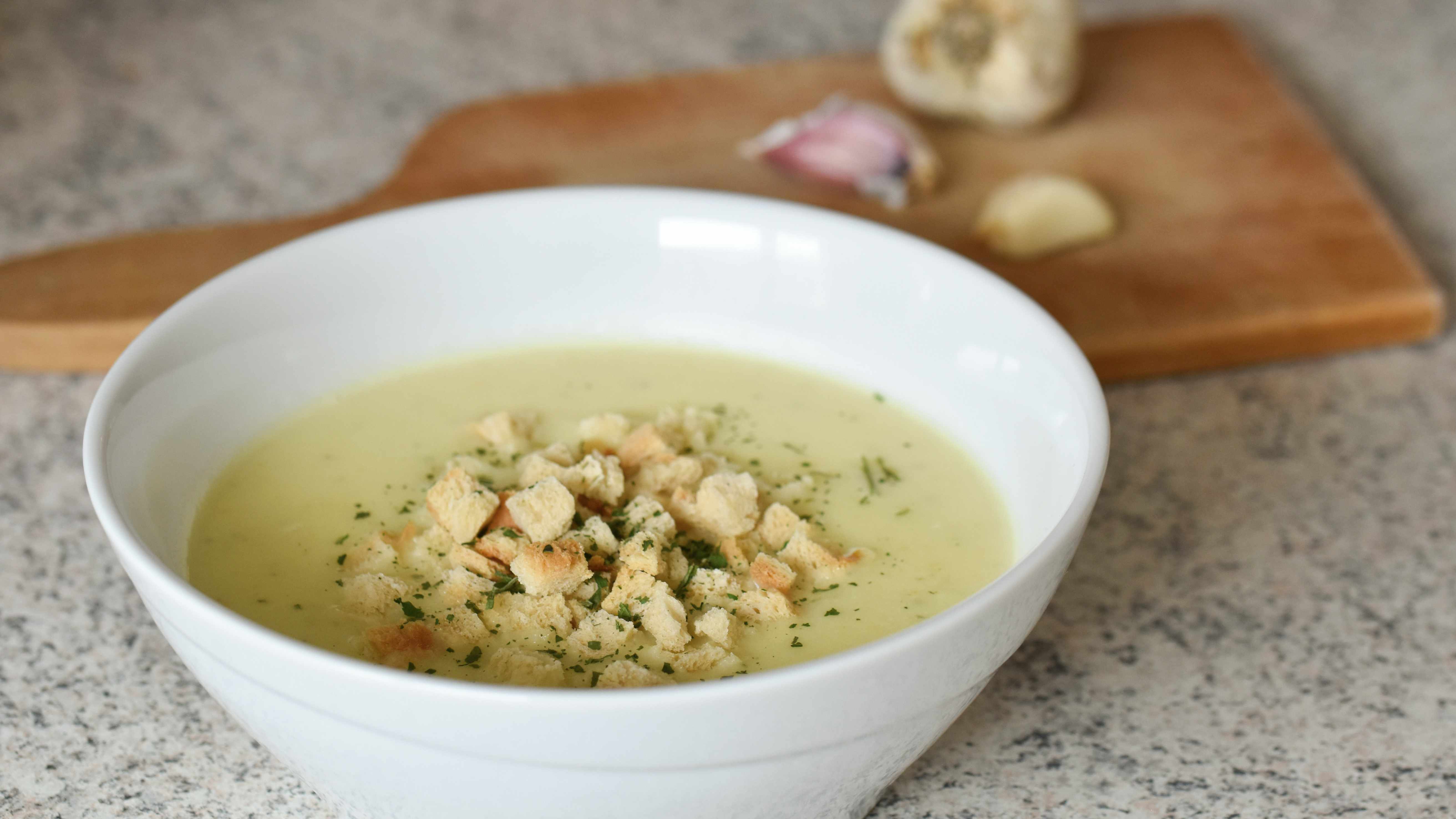 Wildly popular with my omnivorous household, this recipe for vegan vichyssoise is a potato-leek soup.

It is not, as my honeymooning, proofreading mother once discovered on a Bermudian menu, a potato-"leak" soup. You don't have to wonder what is in it! 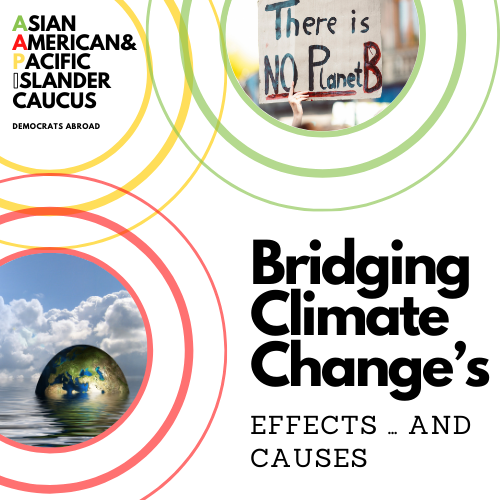 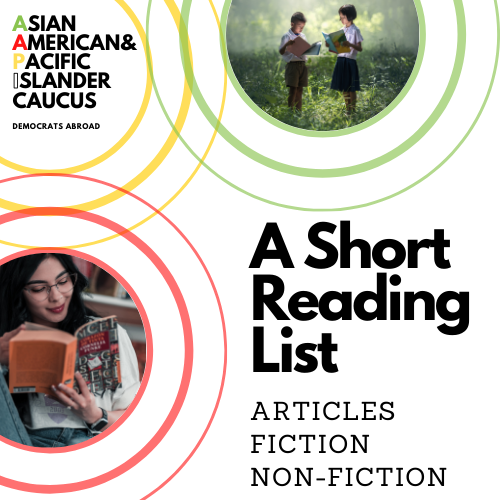 We know many in the AAPI community are in shock after the violent attack in Atlanta earlier this month. It comes after a year of increased rhetoric and violence against AAPI communities since before the pandemic began, and is an intensification of a phenomenon that has happened for a long time.

We felt it was best, at this point, for us to take a step back, and share a reading list: of articles that examine how the events of the past year have affected the AAPI community; of non-fiction books that explore the history and stories of AAPI communities; and of works of fiction that detail AAPI immigrant experiences.

Use these posters (or your own sign), take a picture of yourself, email it to us at [email protected], and post it to your Twitter, Facebook, or Instagram page. This is a rolling action and we'll keep adding pictures to our vigil page as we receive images.

Book Club Event Review: The Dancing Girl and the Turtle